Not to sound like an old curmudgeon, but Bumblebee is a tricky character for me nowadays.  Being a 36 year-old collector means that I grew up with a Bumblebee that was a Volkswagen Bug.  Sometimes he's a variation of a small, compact car, but Bumblebee was always a small car of some sort.  His personality has always been that he's affable and eager to prove his worth to the larger Autobots.  Good ol' 'Bee.

Fast forward to 2007 and Bumblebee is now a Camaro, the complete opposite of a small car and he's ready to fight at the drop of a hat.  Look, I'm not a G1 purist, but that isn't Bumblebee.  As such, I've pretty much refrained from purchasing any of the post-movie 'Bees unless they've been in the Generations line.  Then Hasbro went and put a Camaro Bumblebee in the Generations line.  Then again, it could be a Dodge Challenger.  I'm not a car guy. 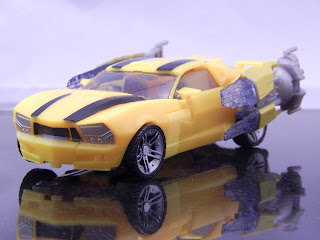 I'll be honest, I would have skipped this figure if I hadn't decided to just order the entire wave from BigBadToystore.  It wound up being cheaper to order the entire wave than just ordering everybody separately minus Bumblebee.  As it it, I now have my first Camaro 'Bee.  This Bumblebee isn't the same character from the movies, rather he's from the IDW Transformers comic.  He was a Camaro for about an issue during the Police State storyline, if I remember correctly.  To be honest, I really don't remember, and I don't want to re-read all of those Mike Costa issues because I can't stand them.  Then he went back to his regular body, which suited me fine. 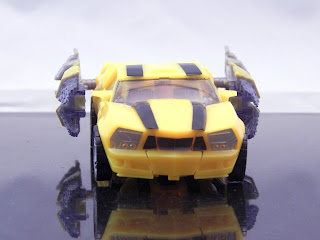 Taking my lack of interest in a Bumblebee that isn't a nice, small car into account, this was initially going to be a figure that I had, but wouldn't cover.  Or I was going to give him to my son.  Then I opened him up and fiddled with him a bit.  He's actually better than I had thought he could be.  The car mode is kind of sleek, for starters.

Transformation is extremely simple on this figure.  It almost has a G-1 simplicity in the transformation scheme.  Once you get him into robot mode, he looks like this. 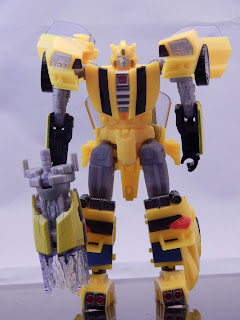 If you're looking for a short, compact 'Bee, this is not the figure for you.  This Bumblebee, while the same size as the War for Cybertron Bumblebee, the Thrilling 30 version is leaner than bulkier War For Cybertron figure. 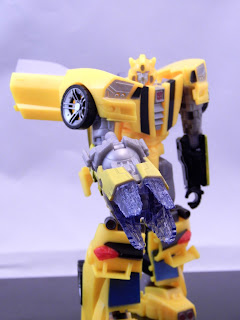 The twin blasters that are mounted to Bumblebee's car mode combine to form a larger gun in robot mode.  I actually kind of like the gun when it's combined. 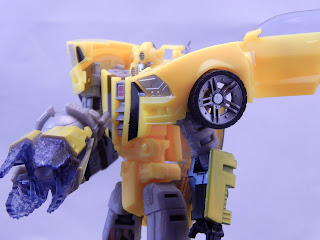 One of the main drawbacks to this figure, to me, are the shoulder pads.  The shoulder pads make it difficult to do any kind of great poses.  Most of Bumblebee's poseability seems to be located in the arms and legs.

Lack of posing options aside, I'm really digging the head sculpt.  It's perhaps the best sculpt of Bumblebee I've ever seen. 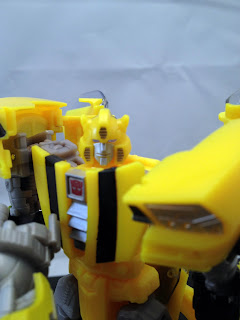 I just dig that head sculpt.  It's pretty much the main reason why I like this figure.  Now I'm left wondering if Hasbro is going to release Cliffjumper as a redeco of this figure.  Cliffjumper gets no love nowadays.  It's all about Bumblebee.