I'm getting so close to finishing the Decepticon Targetmasters that I can practically taste it.  Needlenose brings me one step closer to that goal.  I've always liked Needlenose because he reminded me of a knight, but I don't think I'm really alone in that thought. Besides, Needlenose belongs to best group of Targetmasters - the Double Targetmasters!
I missed the start of Simon Furman's Matrix Quest event, actually, I missed issues 61-64, due to moving and finding a place to buy comics.  As such, issue 65 is when I was first properly introduced to Needlenose.  I seem to remember seeing him on the cardback from the Autobot Double Targetmasters, but I'm not sure.  At any rate, this was where I remember seeing him in all of his Geoff Senior drawn glory.  I've seen every Transformer drawn by every artist, but to me, Geoff Senior is the only person that can draw Needlenose.  Weird, innit?  I don't particularly remember Needlenose doing a whole lot, but his visual has always stuck with me.
I don't even want to discuss Needlenose in the IDW continuity.  For the most part, his portrayal has been decent, but the entire plot point about him being Tracks' brother is just pushing it for me.  Their helmets are vaguely similar, so that means that they're related?  Ugh.  See, I'm discussing it and I didn't want to.  Let's get on to the toy, shall we? 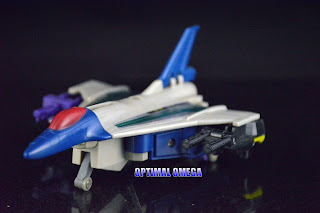 Needlenose's alt-mode is an F-16, which isn't shocking.  I'm too lazy to look it up, but I'm fairly certain that most Decepticon alt-modes are jets.  Maybe not most.  The vast majority.  two out of 5?  At any rate, there are posts under the wings to mount Needlenose's two Nebulons  - Sunbeam and Zig-Zag.  It's a nice look; very tough looking.

Zig-Zag is the Nebulon in the black outfit.  According to his bio, he's an incompetent mechanic.  Man, these Nebulons had some weird jobs before joining the Decepticons.  Not a lot of mad scientists, that I'm aware of.  Just thugs and ninnies.  Even Sunbeam (what?) is a surfer.  Did Bob Budiansky quit caring about what he submitted for tech specs by 1988, or had someone else taken over writing chores?  If so, was that person 7?  Ugh, looking at this picture reminds me that I need to dust my fiures more often. 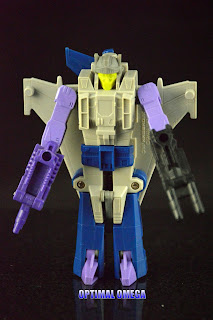 I really need to get some decals for Needlenose.  He looks so naked sans stickers.  That helmet is just exquisite and certainly better looking than Tracks'.  It's odd to see lavender on a Transformer, but it looks pretty good.  At least I think it's lavender.  I'm kind of color blind, not in a major way, but I do have issues from time to time.  The yellow on his face really stands out as well.  Needlenose has perhaps the best looking robot mode of the Decepticon Double Targetmasters and the second best of all of the Double Targetmasters.  Quickmix has the best, by the way. 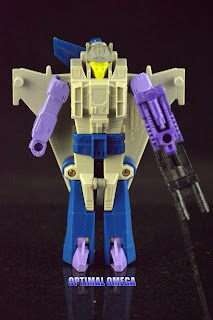 The best part about Double Targetmasters is that their looks can be customized in regards to the weapons.  Want a guy who can dual-wield?  Done.  Want a BFG?  Done.  Wand a BFG with a single barrel?  You get where I'm going with this.  Just so nice.  Now that Needlenose is out of the way, that just leaves Quake,  Gotta catch them all...
Posted by Optimal Omega at 9:10 PM 1 comment: 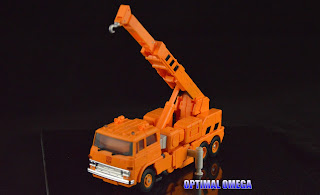 When Inferno was announced in the Masterpiece line , I knew that Grapple wouldn't be far behind.  After receiving Inferno, the wait for Grapple became unbearable.  For as much as I enjoyed Inferno, Grapple was a character that I seemed to enjoy more, just from his history during season 2.  I don't really recall anything that Inferno did, but I sure remember Grapple getting scammed by the Constructicons into building the Solar Power Tower, which puts Grapple over Inferno in my mind, even though Inferno is a firetruck. 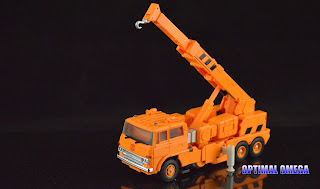 Like Inferno (last mention, I promise), Grapple comes with a ton of accessories.  Just as I did with Inferno (sorry), I'm only going to discuss and show accessories that I like.  Out of the package, Grapple looks just like he did on the show.  For some reason, the fact that the crane can extend and move up and down was perhaps the feature that I least expected, especially at this price point.  I actually think I spent ten minutes just playing with the crane.  I might be 8 years old.

For some reason, there's a shovel attachment, like a cherry picker.  It's pretty nifty and now that I think about it, I could totally put Spike or Daniel in the bucket.  That's what happens when you take pictures one day and type up the review weeks later.  Man, Spike even looks like a phone repair or cable guy.  Hindsight. 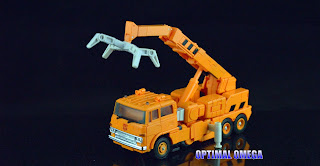 My favorite attachment has to be the claw.  Just seeing it makes me say, in wonder, "The Claw" like I'm a toy alien.  I've never been good at the claw game, but with this attachment, I was able to grab something. 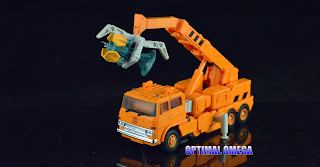 I grabbed the freaking Solar Power Tower!  I'm not totally enamored with the Solar Power Tower (that's a mouthful) as an accessory, but it is nifty.  I've decided to go with the more toy accurate look so I'm only going with the chromed pieces. 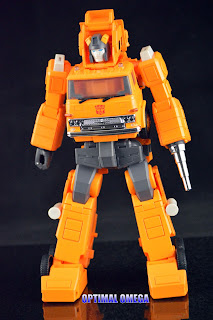 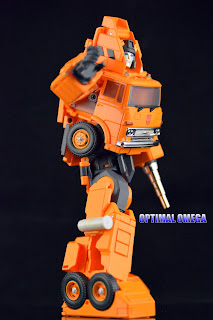 I had a lot of fun posing Grapple.  This mold just seems to lend itself to more poses than a lot of the previous Masterpiece figures.  Or it could be that I've just now started getting posing ideas. 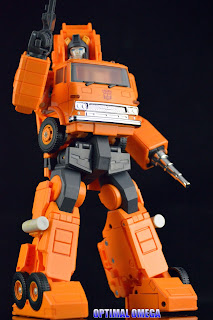 Transforming Grapple is just such a delight.  It's just intuitive.  Breaking down the crane arm for the first time gave me fits, but subsequent transformations have been easier. 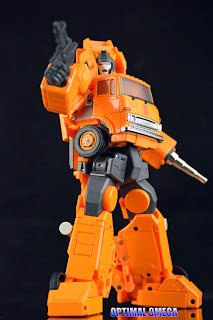 My only quibble with Grapple has to do with the Arc-welder rifle.  Mine is a chore for Grapple to hold onto; it's difficult to position the rifle securely.  Add in the fact that you can't position the rifle with the hand open all of the way, and it just isn't fun to do.  Also, the screaming face will most likely stay on Grapple for a very long time. 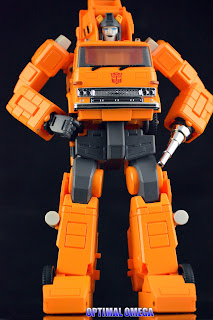 The chuckling face seems almost boastful to me.  Maybe Grapple is bragging about how he made the Solar Power Tower? 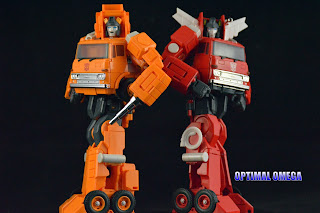 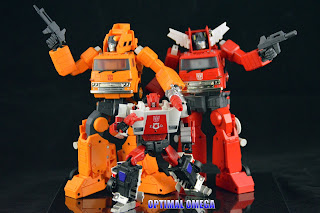 And for no apparent reason, Red Alert joined the party.  Yeah, he's more of a friend to red firetruck guy but aren't all Autobots friends?

I tried something different with this photo set, and I'm entirely sure I'm happy with the results.  I shot from a much lower angle than before, but I didn't adjust the lighting accordingly.  Some of these pictures just seemed washed out to me, and that's all due to lighting.  The angles looked pretty good, they're just so badly lit.  One day I'll get this right.

Posted by Optimal Omega at 10:45 PM No comments: