As I've made abundantly clear, I am not a big fan of the Combiner Wars line.  The figures in an of themselves are fine.  Combined modes, also, are fine.  The fact that there are only something like 4 base "frames" is also something I'm kind of o.k. with.  After all, the same basic argument could be made for the original Scramble City fusilateral quintrocombiners.  What I still can't get over are the hands and feet for these new combiners.  Man, do I hate those things.  They look like that weird character Kristen Wiig used to do on SNL.
I admire the fact that Hasbro wanted to include playability with each piece of combiner kibble.  Have you tried having G1 Streetwise hold Defensor's footplate?  It isn't fun, or easy.  However, the execution that Hasbro put into the Combiner Wars kibble just left a lot to be desired.  Enter the third party companies!  Enter me dropping another $30 on a kit to make Superion look acceptable after spending around $100, once Slingshot is factored in, to even have a Superion!  There were a number of different options to choose from, but I opted to go with Perfect Effect's PC-05 kit because it looked the best, and, frankly, it came in white, the color that Superion should have for his extremities, not black. 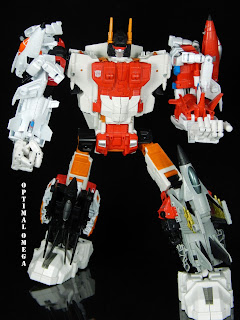 I must say that with the addition of the new feet, Superion actually looks powerful and menacing!  The feet feature swivel tilts that allow for a range of motion that just wasn't afforded with the original feet.  Dynamic poses are much easier to achieve this way. 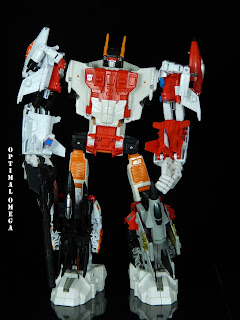 The fists are much improved as well.  For some reason, it's popular for these 3rd party guys to release new hands where each and every finger is articulated.  Really, that's something that I could care less about.  From what I've seen on Facebook and other social media sites, the main purpose of these newly articulated hands is to flip the bird, so to speak.  On the bright side, the new digits do allow Superion to get a better grip on his weapon. 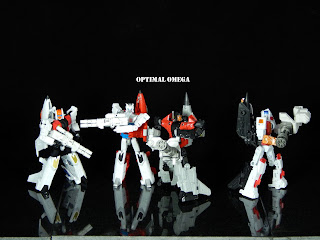 Taking a cue from Hasbro, the Perfect Effect hands and feet are more than meets the eye!  See what I did there?  Anyway, the feet separate to become gatling guns, which if my math is correct, means that you would wind up with 4 gatling guns once the feet are separated.  In the above pic, you'll notice that I'm only showing of said weapons.  I wanted to show Silverbolt holding the weapons as well, but one of the feet would not separate.  Well, it started to, but I could tell that the tab that holds the two halves together was about to break, so I just left it intact.  That proved to be a bit of a letdown, to be honest.  As you can see, the gatling guns can be held in a variety of ways.  They look rather good. 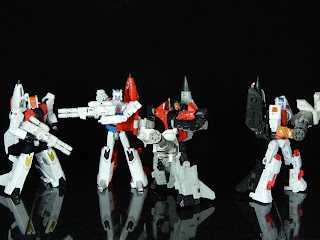 Not to be left out, the hands also convert into guns.  While not as big as the gatlings, I think they look better.  They're certainly much better suited for the Deluxe sized figures.

Overall, I'm pretty impressed with what Perfect Effect has managed to create with this set.  I've normally eschewed upgrade sets because I just never saw the need for them.  The upgrade sets for the G1 combiners always seemed to make the figures look worse, to me.  Sadly, in my view, the upgrade sets are a necessity for Combiner Wars gestalts.  It's a crying shame that I had shell out another $30 to make Superion look like a normal gestalt.
Posted by Optimal Omega at 12:00 AM