I won a Menasor on eBay the other day for $150, which was cheaper than I expected.  I've come to realize that by actually bidding on an auction instead of just going the "Buy It Now" route, I can get stuff cheaper.  Is it me, or are prices getting cheaper?  I've seen Menasors going for around $200 before I won this auction.  If so, that's awesome for me.  This one was missing Wildrider's gun, but I'd be shocked if one missing gun was worth $50.  Anyway, on to the pictures of my newest purchase.


I went with the configuration that most often shows up in the comics.  I've always wanted a Menasor, and now I have him.  I have a Motormaster that doesn't have any accessories, a broken Breakdown, and two Wildriders.  One thing that I never noticed about Menasor is how short he is.  He's shorter than Bruticus.  Still, it was a nice purchase.  That's 5 down, 44 left to go until I hit 400.

Posted by Optimal Omega at 9:25 PM No comments:

I just won a complete set of Stunticons minus Drag Strip's pistol for $150. Missing a pistol isn't a big deal to me since I rarely display gestalt teams separately. I like having a super warrior. As soon as I receive them, I'll post some pictures.

I've actually been staring at Mensor auctions for close to two months. Part of the problem I have is deciding what to buy. I'm sure a lot of you have this problem. It's one thing to say "I'm going to buy a bunch of Transformers on eBay." and then narrowing down what to buy first. Primus knows I have that problem. So, how do I make my decisions?

The first thing I've done is to create a list of the 49 figures I need to get to 400. I fudged it a little bit by listing Menasor and Abominus as one figure. Technically, I'll have purchased 57 figures by the time I've gotten everyone on the list. This was done as a buffer just in case I can't find a few of then for sale.

The next step is looking at my budget. I make a good living, enough so my wife doesn't have to work and all of the bills are covered, but I'm by no means rich. I'd hate to ask my wife to enroll the two out of three children who aren't in school in daycare and for her to return to work just so I could buy toys. While I'm not sure, I'm fairly certain this is how divorces happen. She supports the habit even though she doesn't understand it.

So I've basically set up a slush fund. To fund it, I've been setting aside money on a nearly daily basis to my PayPal account. I've also started selling my comic book collection. Well, I'm not selling them for figures per se, but I'm just sick of comics; they don't do anything for me anymore.

Since I'm working with a budget, I wait until my account looks big enough and then I pull out the list and start searching. My biggest decision lately has been quantity over size. Do I want to spend $250 on a bunch of smaller guys like Runamuck and Triggerbots and Triggercons, or do I use that $250 to purchase say Shockwave or a couple of Headmasters? That decision will usually take me a week to make. On the one hand, I really want to up my G1 figures. On the other, do I really want to boast to my friends about my collection and it be filled with, well, filler? Decisions, man. They can be tough.

Another reason I have trouble deciding on what to buy is my fear of knock offs. I'm extremely worried about buying a Mirage, Dinobot, or any gestalt and wind up with a K.O. When. I had to replace my Hotspot last year, I worried and worried and worried until he arrived and I was able to personally verify that it was real. Anyone else have that worry, or am I just overly paranoid?

So that's where I'm at. I'm pretty sure that I'm going to finish my Dinobots next. Grimlock's looking lonely. Then again, wouldn't it be logical to have Shockwave? Then again, Fortress Maximus doesn't have any Headmasters to command. Sigh.

Posted by Optimal Omega at 6:14 PM No comments:

Now that I'm getting some page views that aren't from me, I'll make an about me post.

Like a lot of Transfans, I was drawn to the Transformers at an early age. Lucky for me, I was there at the beginning in 1984. My first memory of a Transformer sighting was at a Mervin's department store in San Diego, California. It was the Frenzy/Ravage two-pack. My mother quickly shot me down when I asked for it. A few weeks later, I got Huffer.

Not long after I got Huffer, the cartoon premiered and an obsession was born. Everyday after school, I made sure to watch the series. Every episode made me want to buy more. It's almost like they had planned it that way...

I made it my mission to get as many Transformers as I could. Every gift giving occasion was accompanied with a request for a Transformer. Every dollar of allowance was saved for the express purpose of buying more. There were times when I wouldn't eat lunch just so I'd have more money to buy Transformers. Sure there were occasional lapses where I wanted Star Wars or Masters of the Universe, but more often than not, I wanted Transformers.

My Transformer obsession lasted right up until the Action Masters were taken off store shelves. I remember seeing Generation 2 figures, especially the multi-colored Dinobots, and thinking that they were a perversion. Thus ended my love affair. I still read the comics, but it was over - finished! Up into my parents' attic they went.

My interest was piqued a few times. I got a few Beast Wars figures and watched the show when it was on and I was at home. Robots in Disguise got my foot in the door a little more. The figures, not the show. I think that the fact that they were cars, and not animals had something to do with it. I got a few of them. I still watched my VHS copy of TF:TM a lot, but that was about it for me.

Sometime around 2000, I read an article in Wizard Magazine about 80's properties and there was a Transformers article with art by Pat Lee. I noted that it looked pretty good, but quickly forgot about it. Then I read about Dreamwave getting the license to produce Transformers comics and I was back in. Then I discovered that there were Transformer websites on the Internet. Holy crap.

During Dreamwave's run, Takara started doing their book style reissues. Before I ordered my first one, Prowl, I had to make sure that mine was I. As bad a shape as I remembered. A few trips into my parents' attic later, and I couldn't find him. Since my father was in the Navy when I was growing up, I lost a few toys here and there during moves. Apparently I lost quite a few during the final move when my father retired. Damn. That just meant that I had to buy them again. Which makes me thankful for reissues.

My main goal as of right now is to get to 400 Transformers. Once I get there, I'll figure out where to go. I'd like to start getting Japanese only G1 figures, but I feel that I should complete the U.S. run first. We'll just have to see.

Why did I choose the name Optimal Omega? When I joined the Dreamwave boards, I didn't want a known name, so I decided to create my own character. Optimal Omega is Omega Supreme, Junior. He's 3/4 Omega's height, but more heavily armored, which makes him slower. He even splits into two vehicles - a tank and a jet capable of carrying the tank and passengers. The picture on the homepage was created by Makotron for me. I've been known to go by Sir Optimal Omega and Sir Optimal Omega, IV.

Email ThisBlogThis!Share to TwitterShare to FacebookShare to Pinterest
Labels: about me, Optimal Omega, Transformers, Transformers cartoon

One of my favorite things about the Transformers, especially G1, is the fact that there are gestalts.  You won't find that in other robot toylines.  Well, Go-Bots, but who cares about them?  I just love taking five robots and combining them into one giant robot.  It's awesome.  Just awesome. 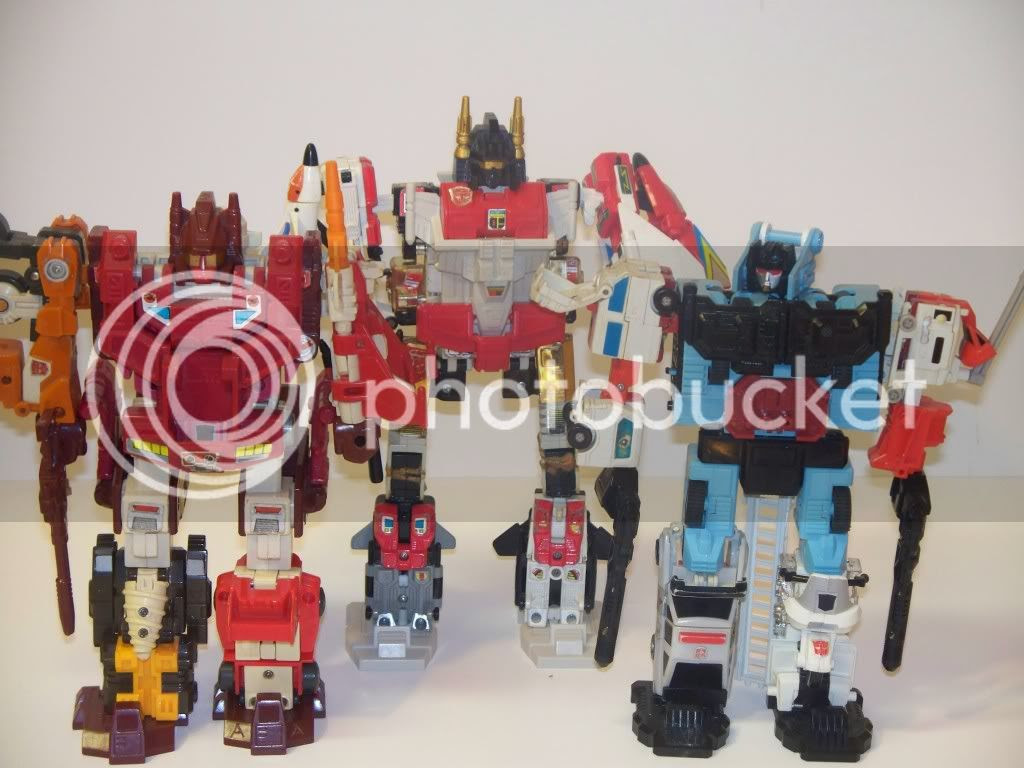 Here we have my Autobot gestalts, Computron, Superion, and Defensor.  I need to replace my Silverbolt.  Apparently being stored in my parent's attic in a box that had rubber bands for over a decade had ill effects on him.  The rubber bands melted on his feet, so there's these weird pieces of rubber there.  Out of these three, Computron is my favorite.  It has to do with the combination of the Technobots being scientists and the fact that in the cartoon, they were created by Grimlock.  How awesome is that?  Before I got Computron as a kid, Defensor was hands down my favorite.  He had something that Devastator and Superion could only dream of having - a head that moved!  He still looks great.  I still need Raiden, but I haven't made up my mind about him yet. 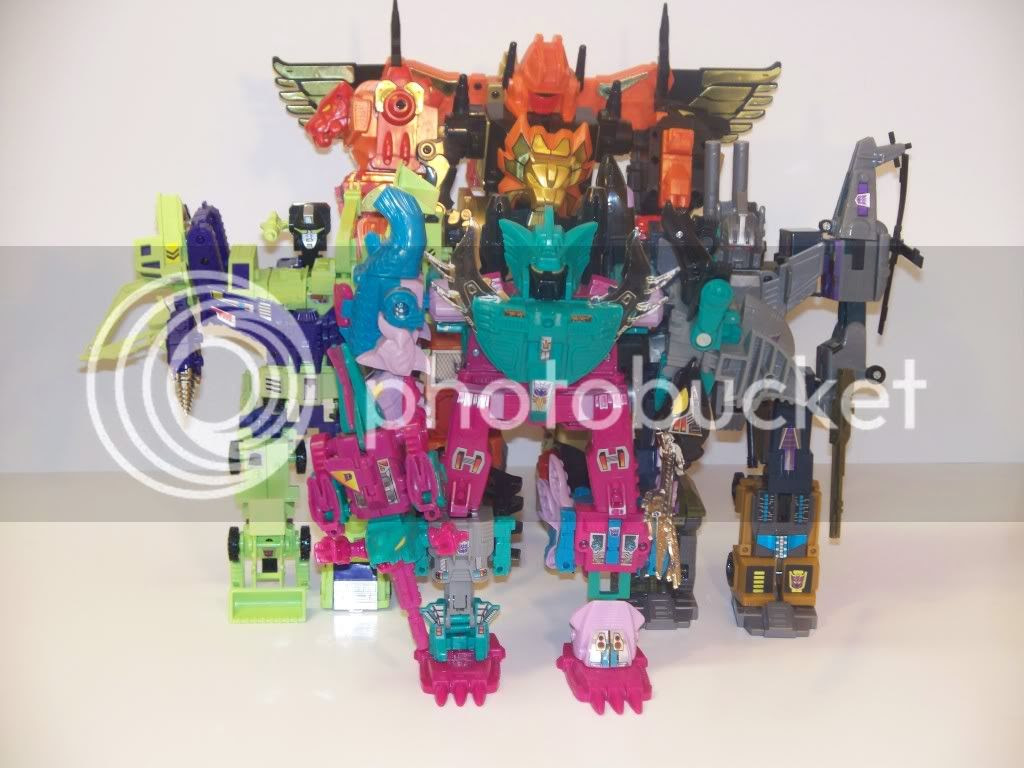 Here are my Decepticons - Predaking, Devastator, Piranacon, and Bruticus.  They're all reissues.  I used to have a Devastator, but all that remains of him are Scavenger, Bonecrusher, and Long Haul.  My original Seacons vanished somehow.  Until I got the 2010 Predaking reissue, I had never seen him in person.  I've known kids who claimed to have him, but when I asked to see him, I'd get stories like "My mom won't let me take him out of the house."  I once knew a kid who had all of the Predacons except for Divebomb and Rampage, but that's as close as I got to Predaking.  I had Tantrum, but that was it.  I still need to get Abominus and Menasor, but that should be remedied soon.  I guess I need to get Monstructor, but I never really cared for him.  I especially don't really care about his over $500 price tag on the secondary market.  That's too much for something so ugly.

I've always wondered why there were so many more Decepticon gestalts than Autobot.  Do the Decepticons need more help than the Autobots?  Is it a technology that the Autobots just aren't good at?  I don't know.
Posted by Optimal Omega at 11:47 PM No comments:

Man, getting Encore Twincast and Soundblaster really has reawakened my love of Communication Officers and their cassettes lately.  So we'll start with my Blaster molds. 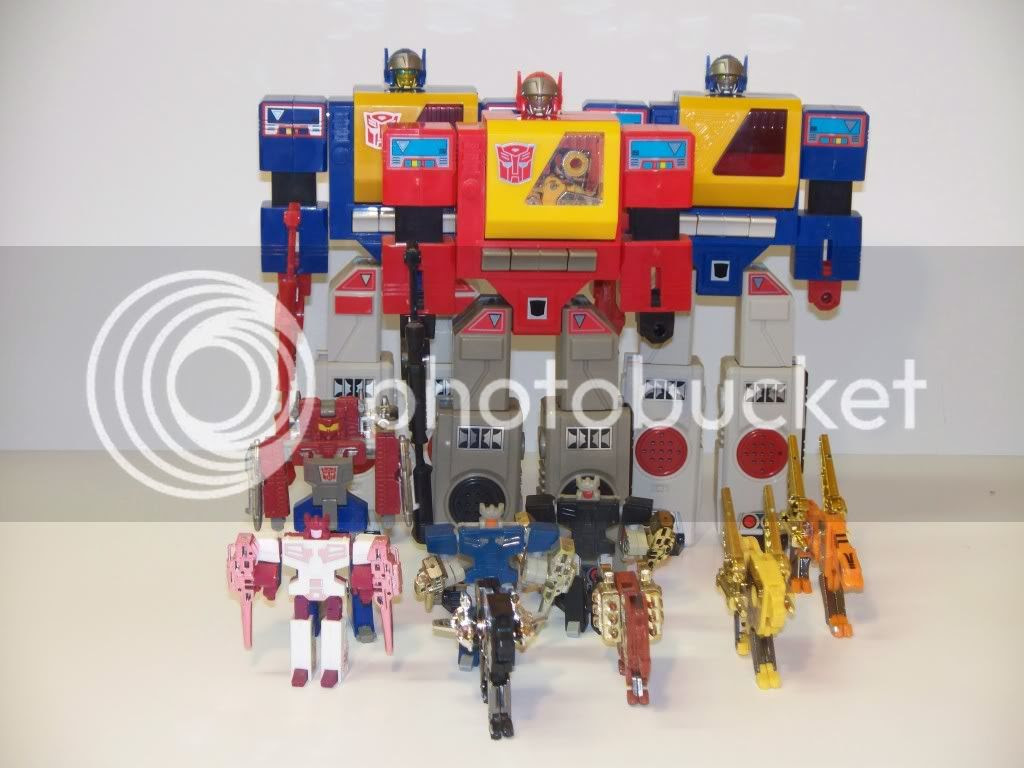 Read more »
Posted by Optimal Omega at 4:48 PM No comments:

My last post showed the Autobot Communicators and their cassettes.  This time I'll show off the Decepticons. 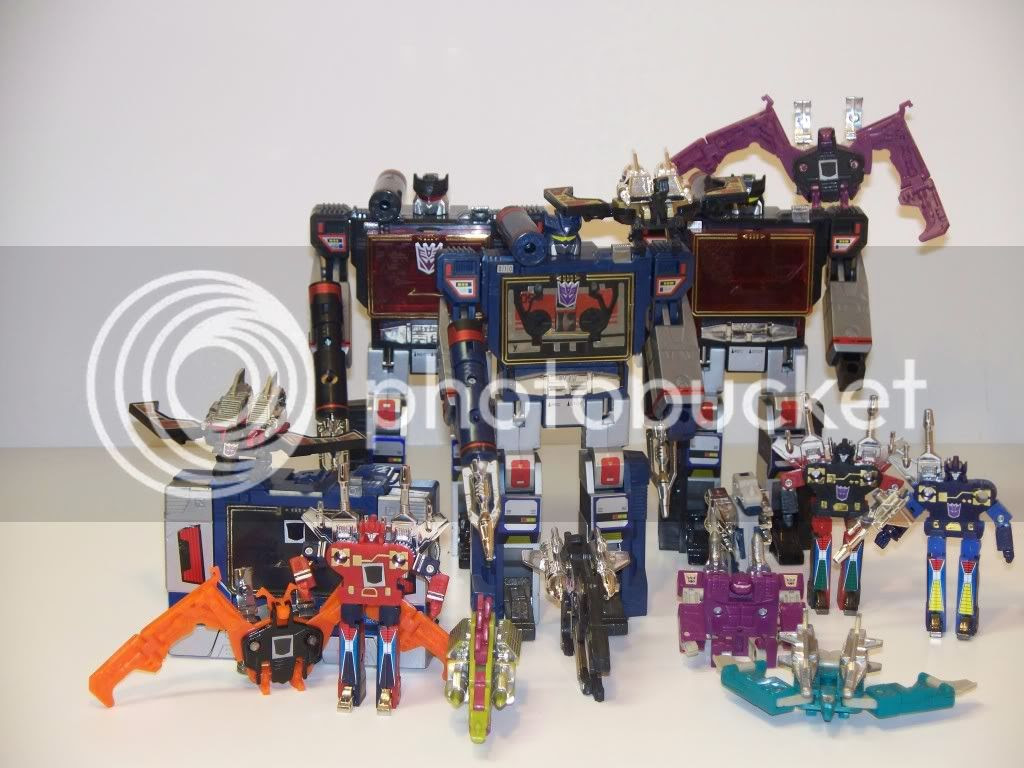 I currently have 351 Transformers.  It's...a low number to most people.  And by most people, I mean most Transformers collectors.  I consider it a large amount because my collection is essentially all G1, Masterpiece, and Classics/Generations.  There are the odd Beast Wars figures or Robots in Disguise figures, but those were all given to me as gifts by various people who were like "Hey, he likes Transformers, that's a Transformer,  I should get that for him.  He'll like that."  It's not that I hate anything that's not G1, I'm just not interested in anything other that G1 figures.  I liked Beast Wars/Machines.  Everything after that...meh.
Read more »
Posted by Optimal Omega at 4:07 AM 3 comments: