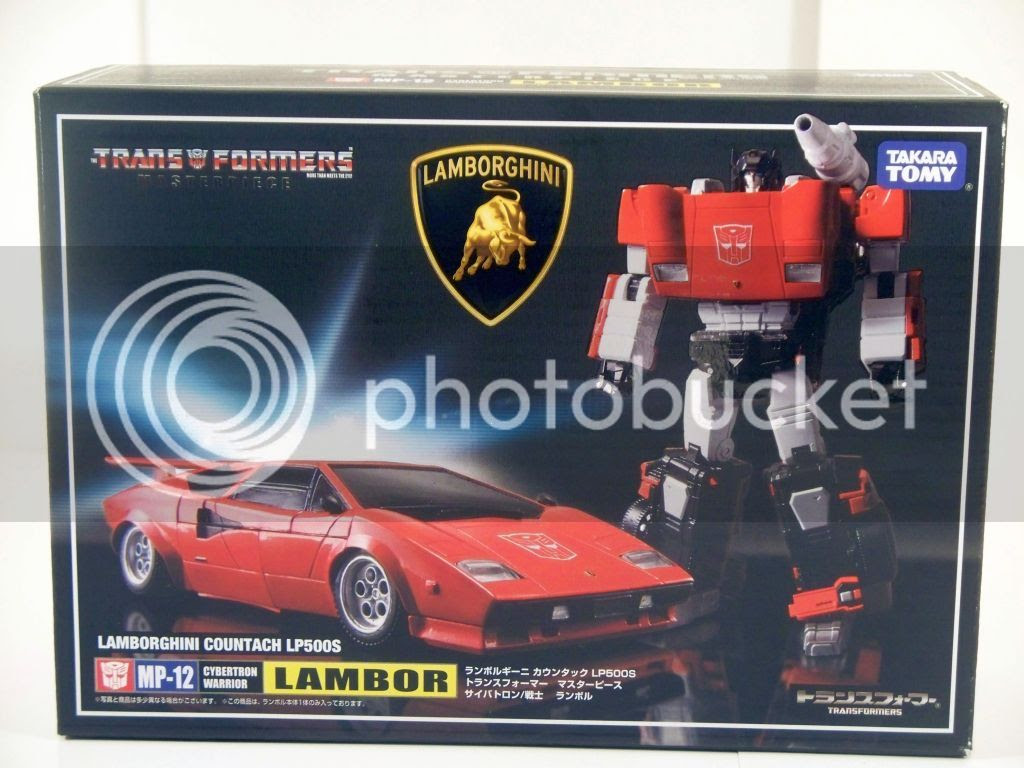 Oddly, there isn't one picture or review on the entirety of the Internet about the newly released Masterpiece Lambor, also known as MP-12 and Masterpiece Sideswipe. I guess this makes this the only blog or website to talk about him. He must not be popular or something. Try doing a Google search for MP-12 Sideswipe and not a thing pops up.

In all seriousness, this is probably the 534,698th review of this figure and most likely will wind up being the least read. Oh well.

I'm not going to go into all of the detail that everyone else has or will everywhere else. Why beat a dead horse? This will mainly be pictures.

I will say a few things about the figure before I start with the pics. After learning about the lack of die-cast, I was a little apprehensive. I understand that all-plastic figures are sturdier than those featuring die-cast parts, but I like the heft of a metal figure. That being said, for an all-plastic construction, this guy is solid. The lack of rubber tires had me concerned as well, but the plastic tires still look sharp.

I've seen online where MP-12 was essentially the size of a Classics figure which worried me greatly. Having finally gotten mine, I can say that the heights may be the same, but Sideswipe definitely has more girth and substance than a Classics figure. Just the poseability alone makes Sideswipe a worthy purchase. I love this figure. On to pics! 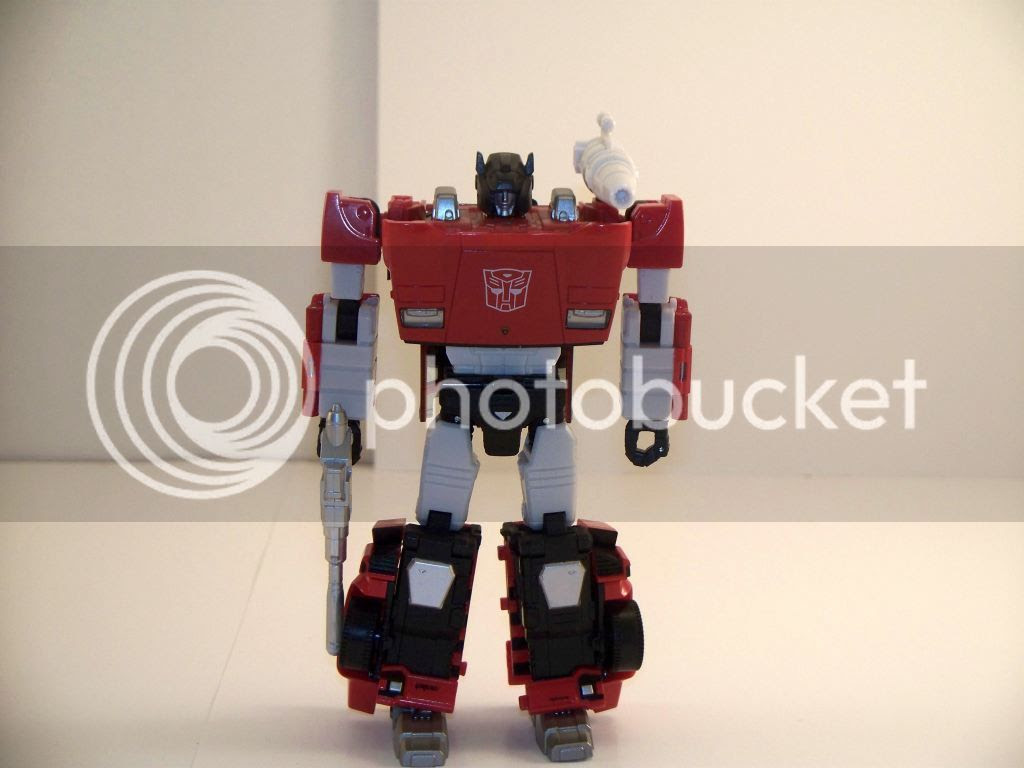 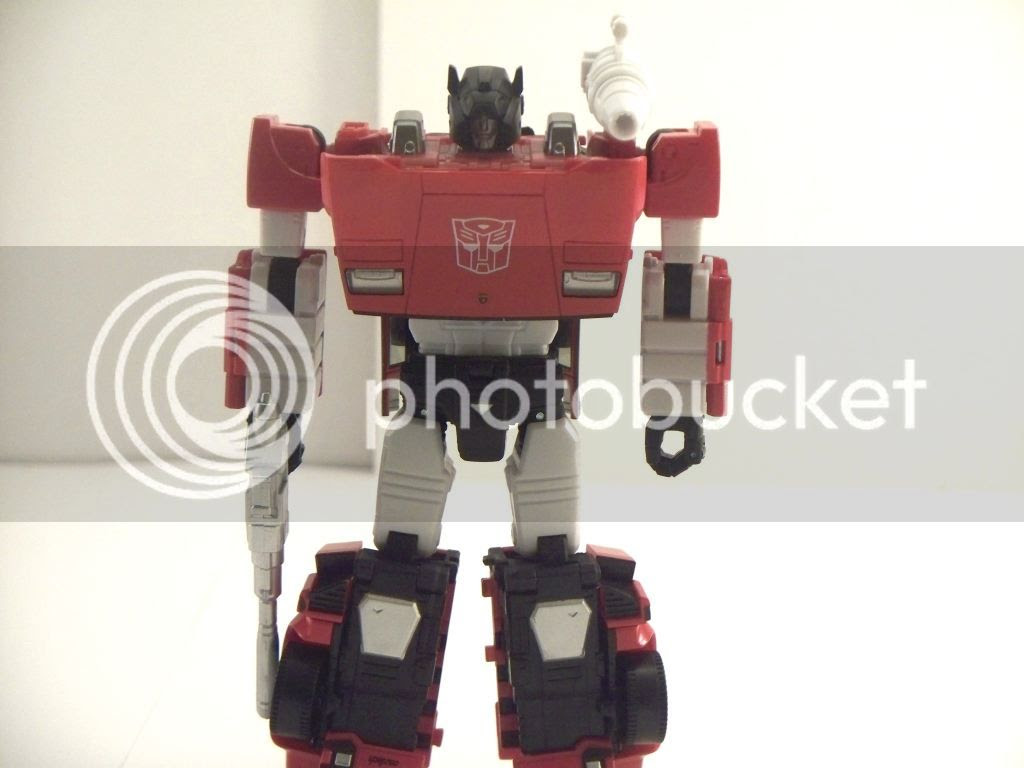 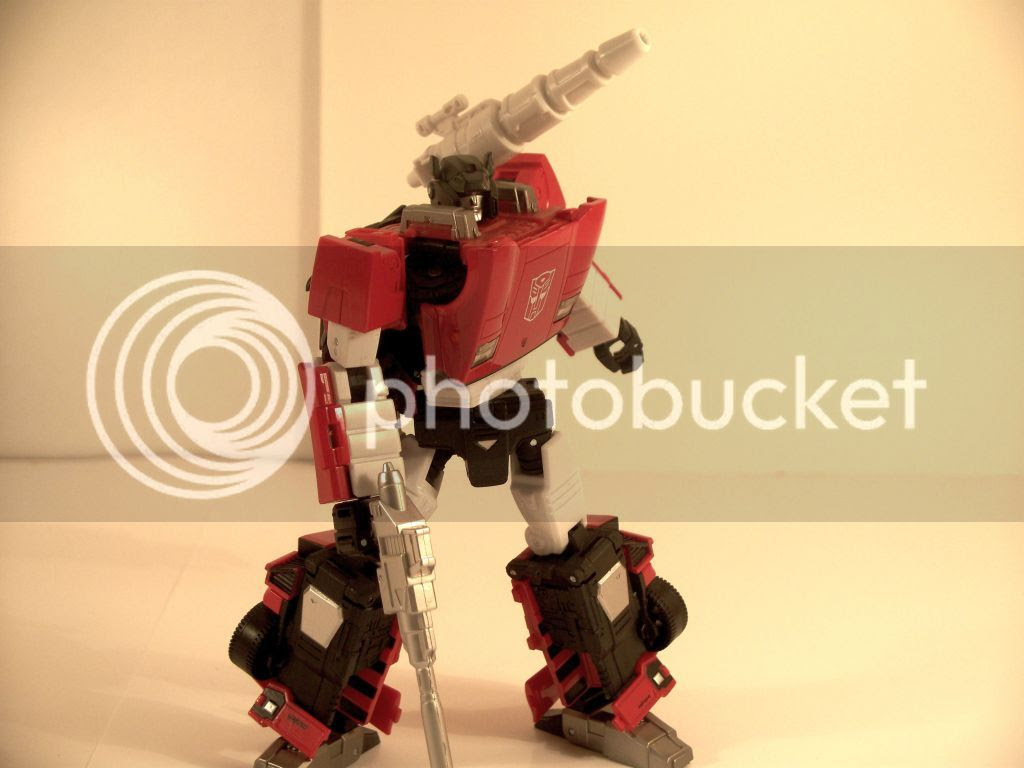 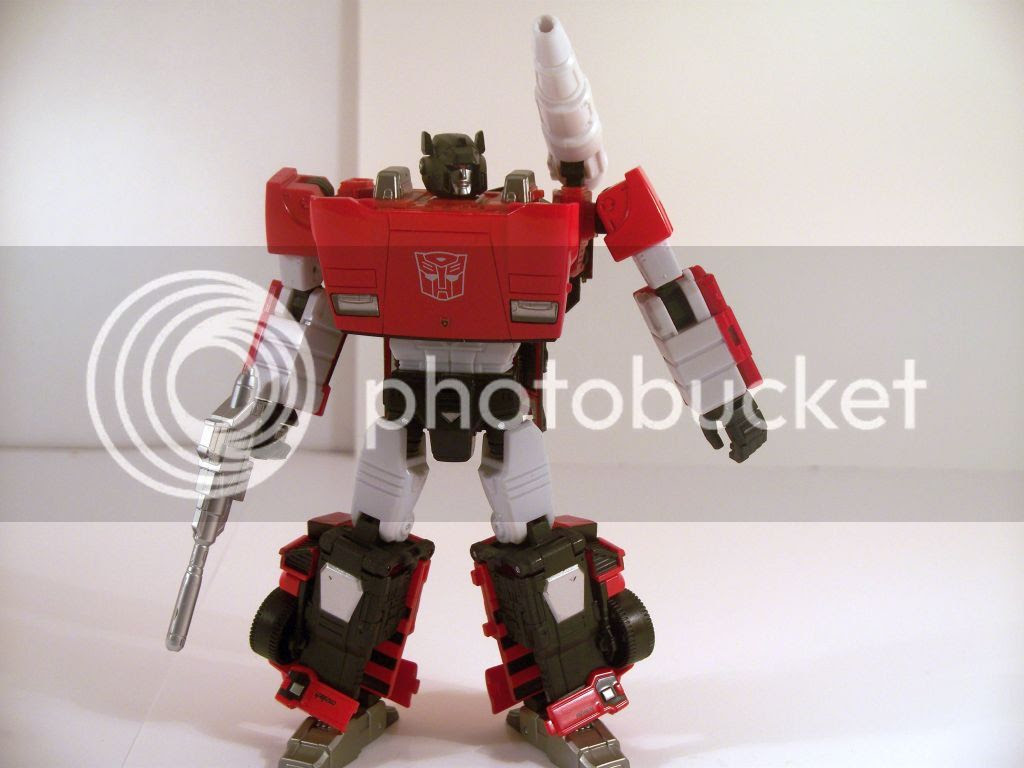 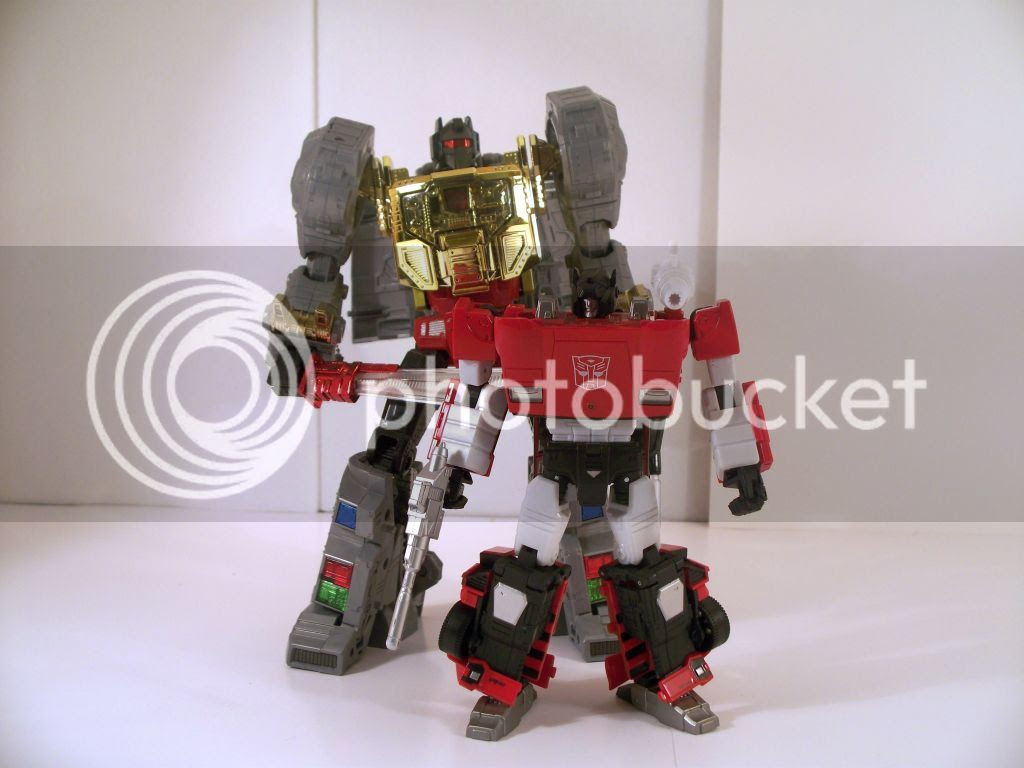 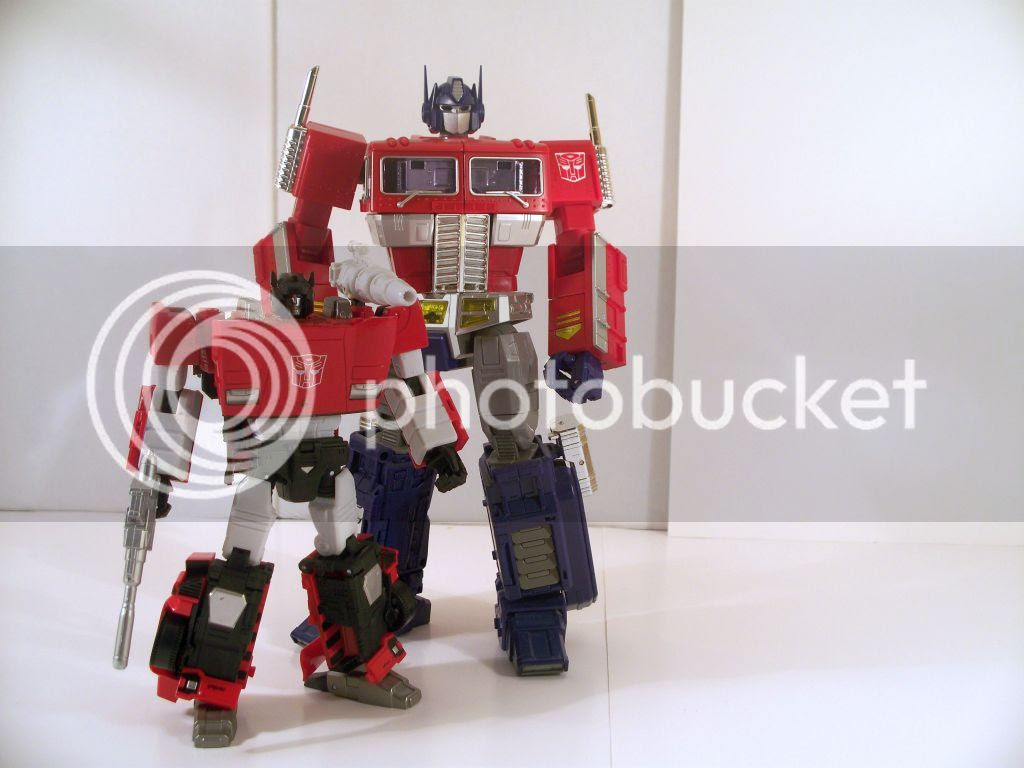 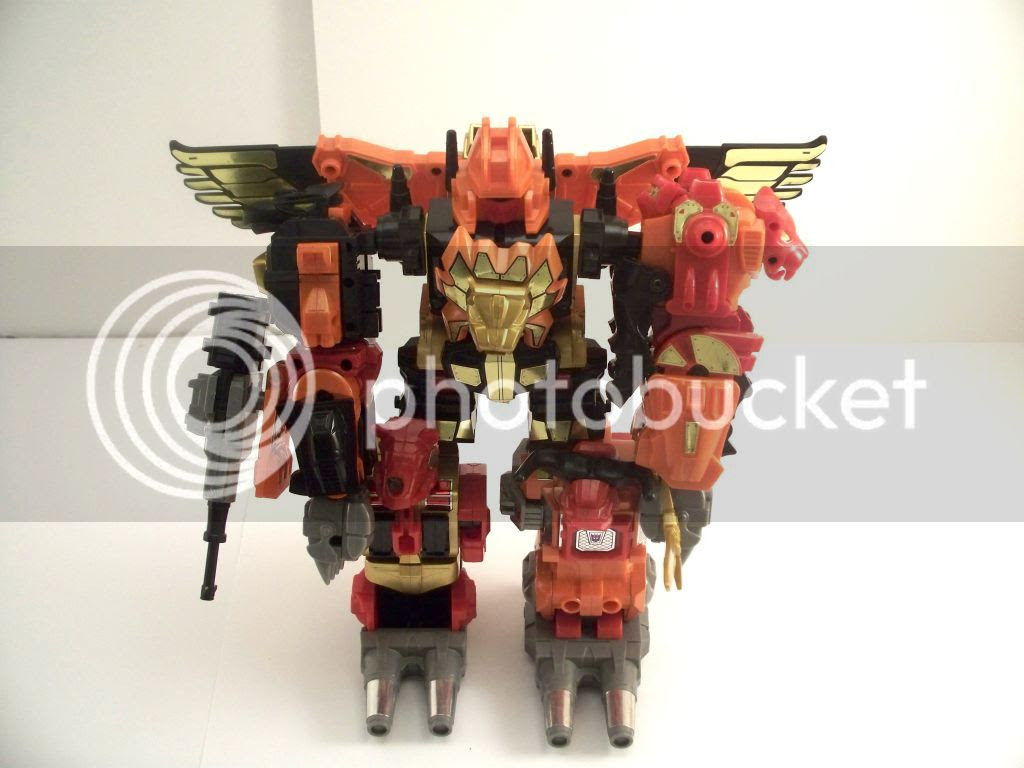 Finally, down to the big guy. Predaking is one of those characters who should kick a lot of tail, but just never did a whole lot. I mean, the first time he ever won a fight across any continuity was against Bruticus in an issue of the old Dreamwave series. Reading his bio, I get frustrated whenever he gets defeated as easily as being taken down by one shot by Pointblank in the Headmaster cartoons.

Predaking is a being who loves the thrill of the hunt. Not like how a redneck puts on a bunch of camo and sprays doe urine everywhere kind of hunter. More like "The Most Dangerous Game" by Richard Connell kind of hunt. You'd think he'd be better at it. I'm beginning to wonder if writers think of him more like a Goliath type who must be overcome. That would be great if he was utilized that way in a proper manner. But come on, Pointblank took him down in one shot!

Maybe, it could be that the writers looked at Predaking and laughed. I'm not saying that Predaking is a horrible figure, mind you. The more I think about it, the more I think I may have built Predaking up in my head that when I got him, I was destined to be disappointed.

Lets look at him: 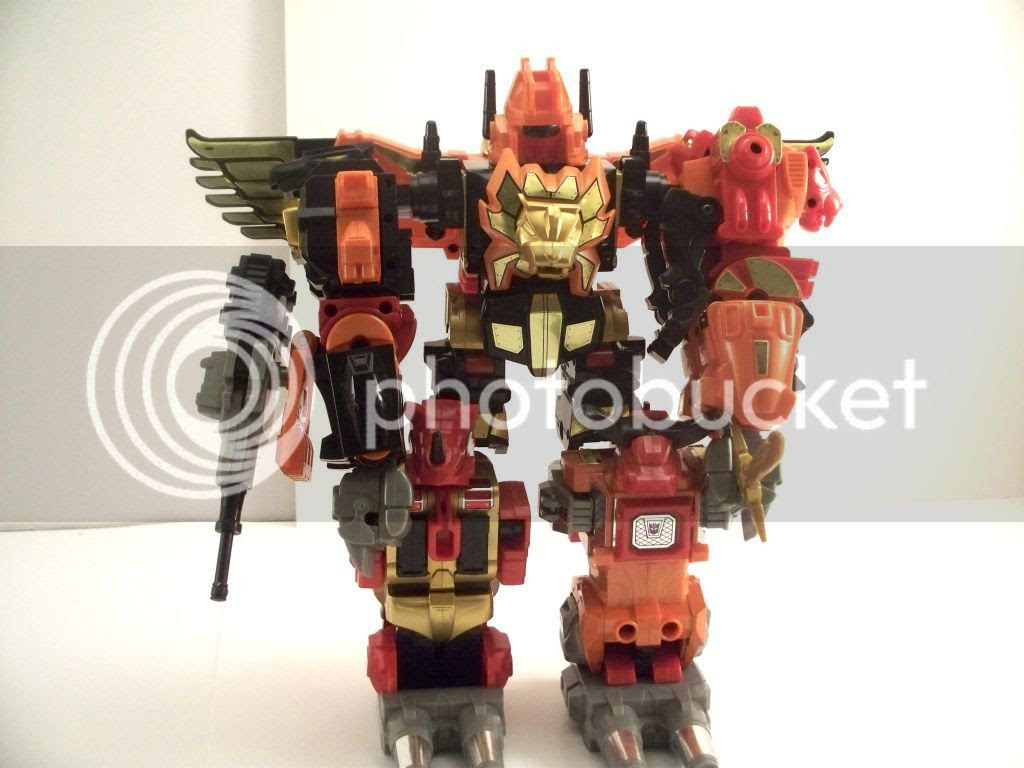 Majestic, yes? It's not just his height that stands out. He's bulky; a good kind of bulky. Predaking looks like you don't want to mess with him. I'm not too keen on his arms sagging so much, but after looking around the Internet, this appears to be because of the weight of the die-cast parts. The all-plastic versions don't have this problem.

The wings on his back really look great. To me it makes him look more menacing, like a winged version of death and doom. His fists even rotate!

The only major problems I have with Predaking are his head and sword. I think a lot of people have these same issues. The head just seems too compact. When Predaking is depicted in the fiction, his head antennae are long, the toy's are short and even with the top of the head. 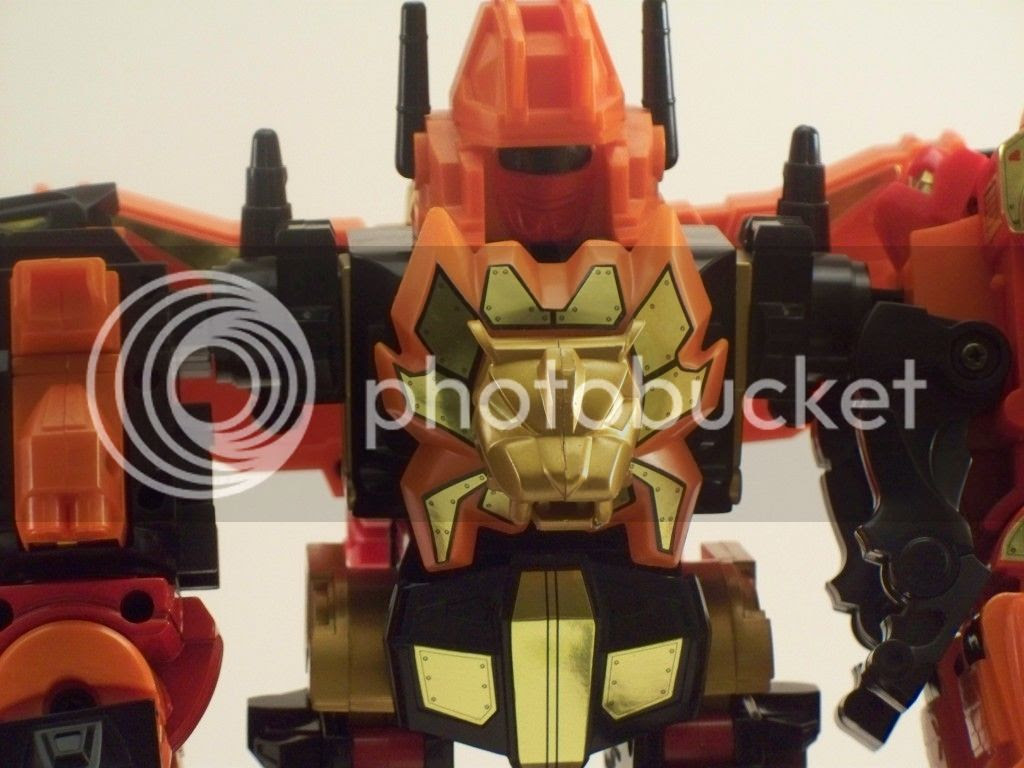 The sword. Man the sword. Predaking uses Razorclaw's sword and it is woefully short. It's...it's just wrong. I never display Predaking with his sword. It looks like me trying to use my one-year old's training fork. 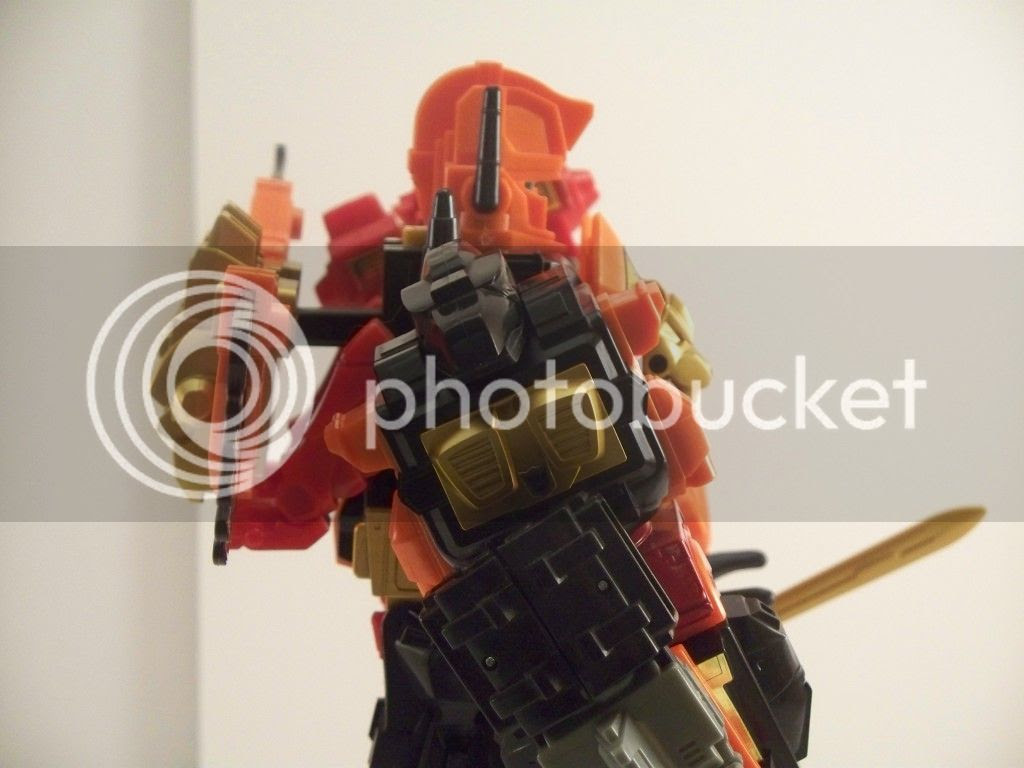 The small head and tiny sword actually have me considering buying the CrazyDevy upgrades. I'm not a big fan of third party stuff, but something needs to be done about the Predaking aesthetic look. It's just criminal how these two things have lowered my opinion of this great figure.

Overall, Predaking is an awesome and imposing figure. He towers over every other gestalt and looks like he could destroy anything in his path. This is a figure that I would love to see updated as a Classic or a Masterpiece. Other than the head and sword, I think this is a must buy for all.
Posted by Optimal Omega at 12:00 AM 1 comment:

I was struggling to come up with anything to say about Headstrong, so I've decided to combine posts on Predaking's legs. However, I really don't have a lot to say about these two, so I'm going to power through this post. Gotta get to Predaking!

Headstrong's a rhinoceros, a very good looking one at that. They've replaced his yellow hide with the gold flake and it does look better than the original. Just looking at him, I wouldn't mess with him. I would like for there to be a tail, but no matter, the rhino mode looks great. Add the dual cannon blaster on, and I wouldn't even look at him in the eye if I saw him the wild. 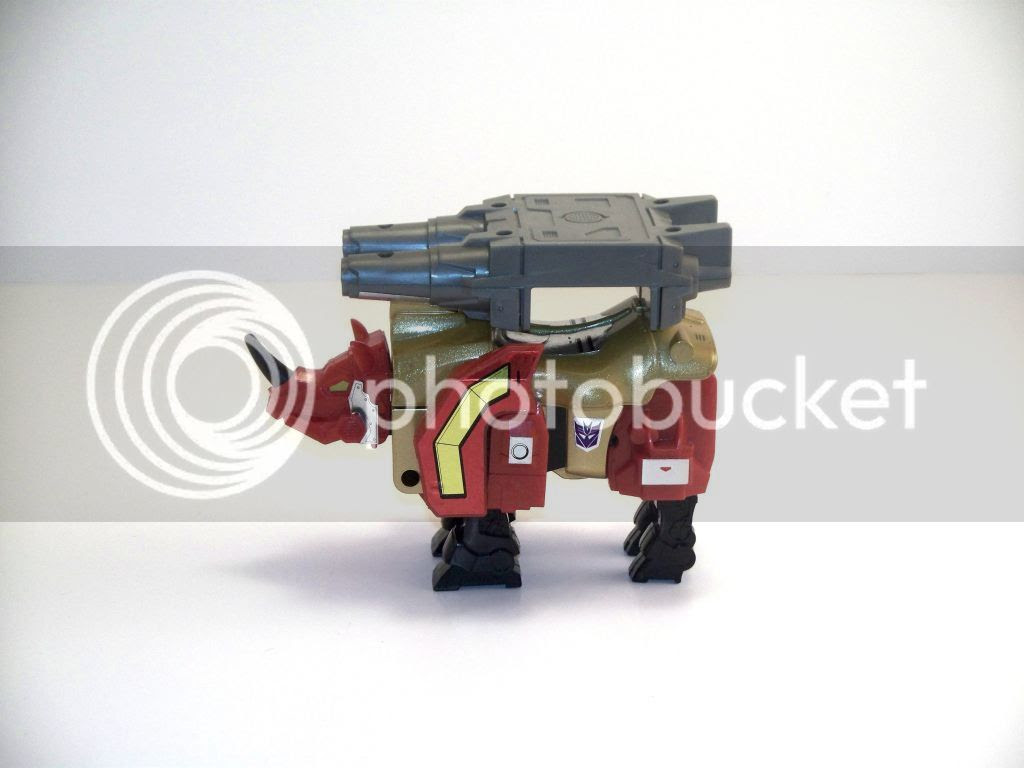 His robot mode is...well ugly, yes, but I want to say that it's a rhino that stood up and discovered that it had a humanoid head. His feet are little pieces of black plastic that just jut out from the red hind quarters of the rhino. There's a stabilizing fin in the back that must be flipped out so he can stand. His robot mode is frankly a mess. Tantrum fares a little better in my eyes. The metal flake paint, again, looks great. The bull mode is solid. Just let me say that with all of the Predacons, the animal modes are for the most part exquisite. Again, I'd like to see a tail, but I won't quibble over it too much. 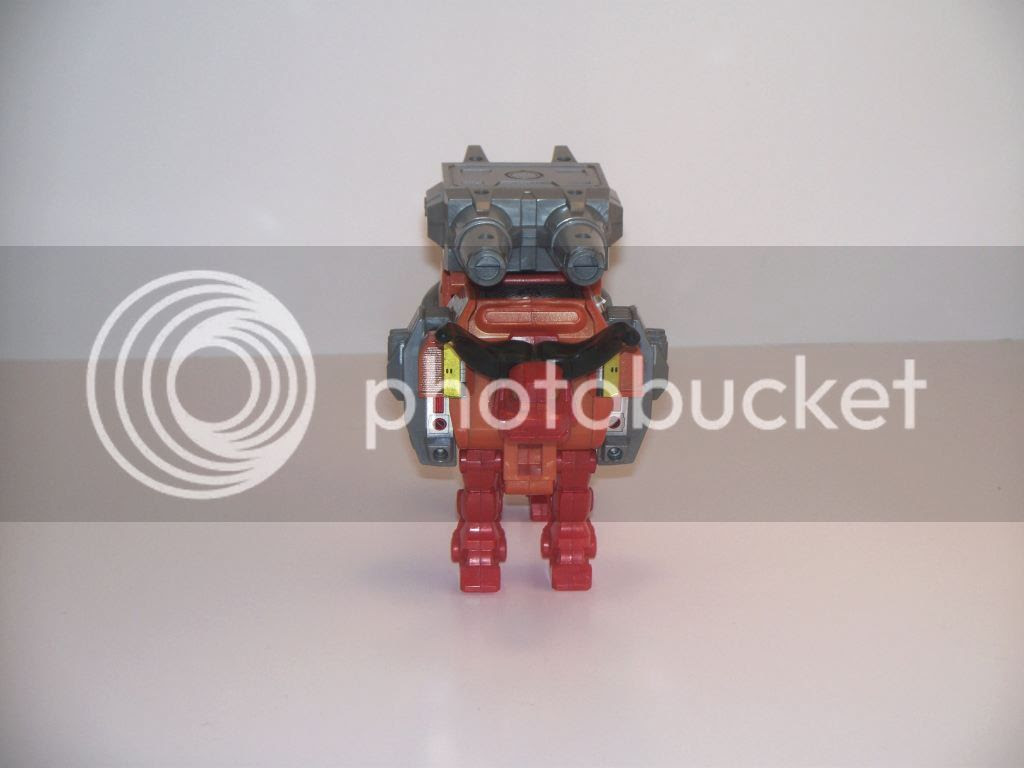 Maybe I'm just biased since I've had this guy since I was a kid, but I really like the robot mode. Tantrum is tall and his arms are really poseable. Unlike Headstrong, he has actual feet! Yay for feet!


I actually have an original all plastic version to compare with, so I'll just shit up and let the pictures do the rest. Up next - Predaking! 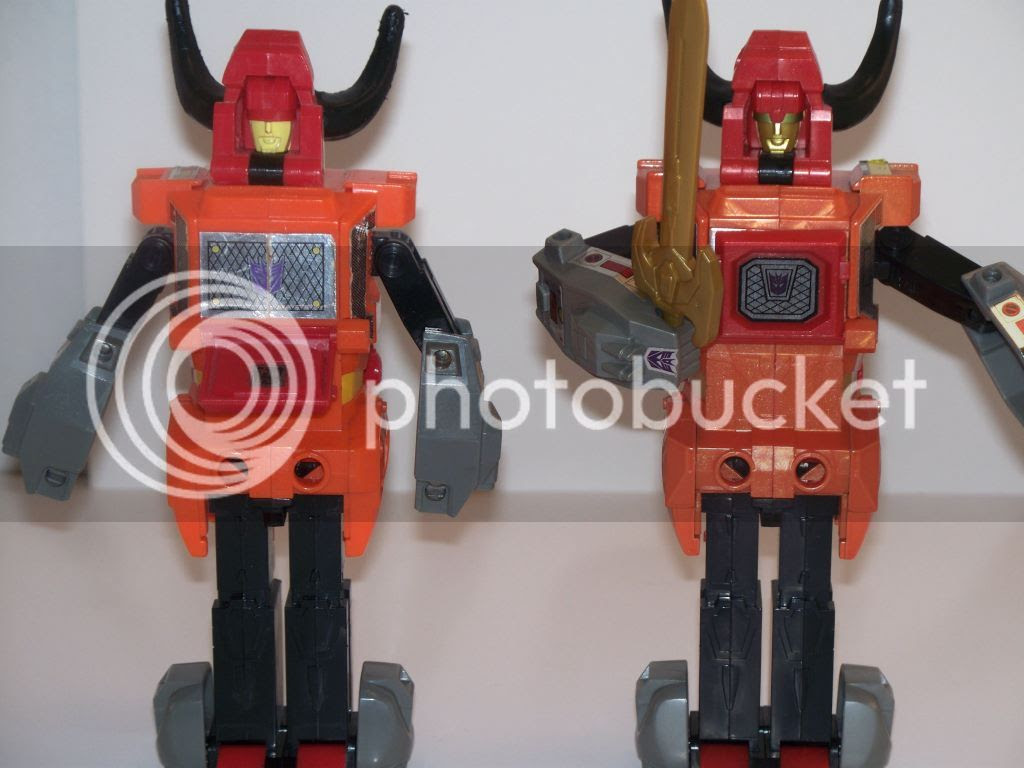 I just had an odd realization. With TakaraTomy doing Masterpieces in scale and their desire to eliminate the fandom's desire of third party products, could Masterpiece Gestalts be next?

I didn't think they'd do MP cassettes, but they are. Gestalts would be astonishing. I think that there's definitely a market for it considering the prices that the third party stuff sells for. Am I crazy?
Posted by Optimal Omega at 4:47 PM 4 comments:

So I've covered the left and right arms of the Welcome to 2010 Predaking reissue. I'm basically just disassembling my Predaking and doing posts. That means that the torso is next. Here goes my Razorclaw post.

Razorclaw's profile is pretty awesome. It's so awesome, that I'm just going to copy it directly from the TFWiki:


Know that when the Predacons are on the hunt, their leader Razorclaw is all business. Every drop of fuel in his system and every thought in his processor are dedicated to the task at hand, and he often lies in wait, completely motionless, for long stretches of time. Fools confuse this for laziness. Many of them have become his prey.
Like all the Predacons, Razorclaw revels in the hunt. And the only thing he appreciates more than an easy kill is one earned in battle with worthy prey. In these situations, Razorclaw prefers to face his foe with honor. It costs him little to give them a well-earned moment of dignity, as their ultimate fate will remain the same.

Awesome, right? It figures that the ultimate predator would be the leader if the Predacons. If only this had been exploited in the U.S. cartoon or the Marvel Comics. Well, the G1 run. I actually liked what Furman did with him in the G2 series.

The best use of Razorclaw so far has naturally been in the IDW comics. First Simon Furman established Razorclaw's sense of honor during "Stormbringer" then Mike Costa added the survival of the fittest angle in the relaunched G1 comic. Truly a great Decepticon.

Such a great character deserves a great toy. Razorclaw missed the boat on that. Badly. Don't get me wrong, I don't hate the figure, but I don't live it either.

Razorclaw was definitely designed with the intention of being Predaking's torso first, in my mind, and a Transformer second. It works for his alt mode, which is gorgeous. I mean look at it: 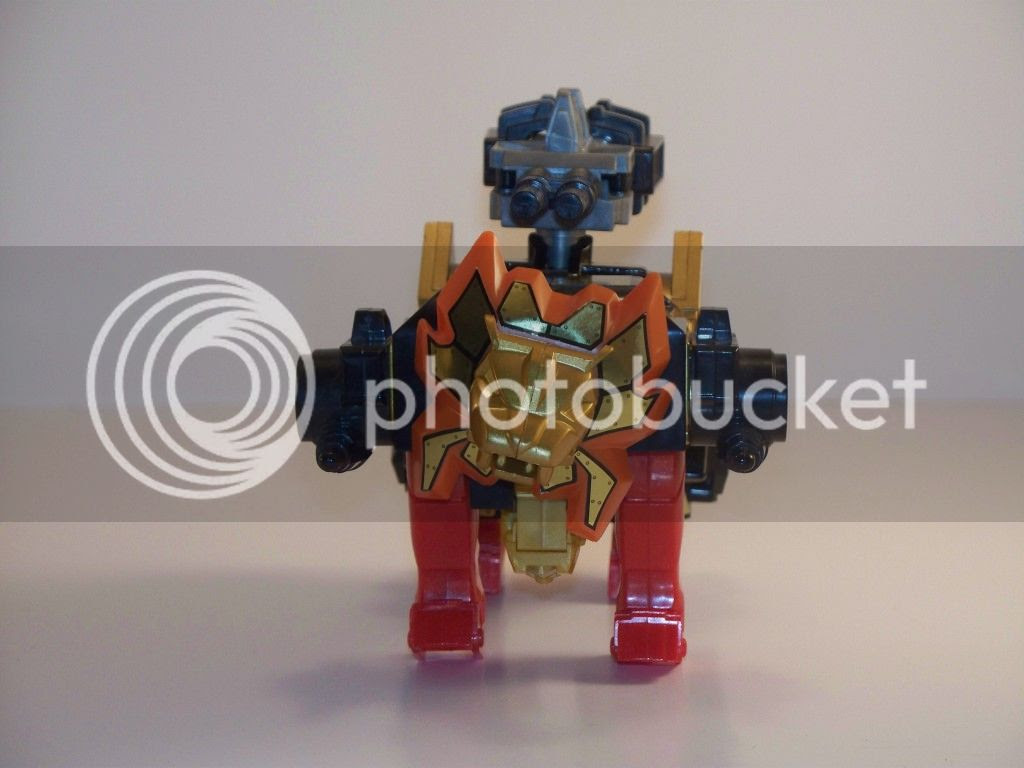 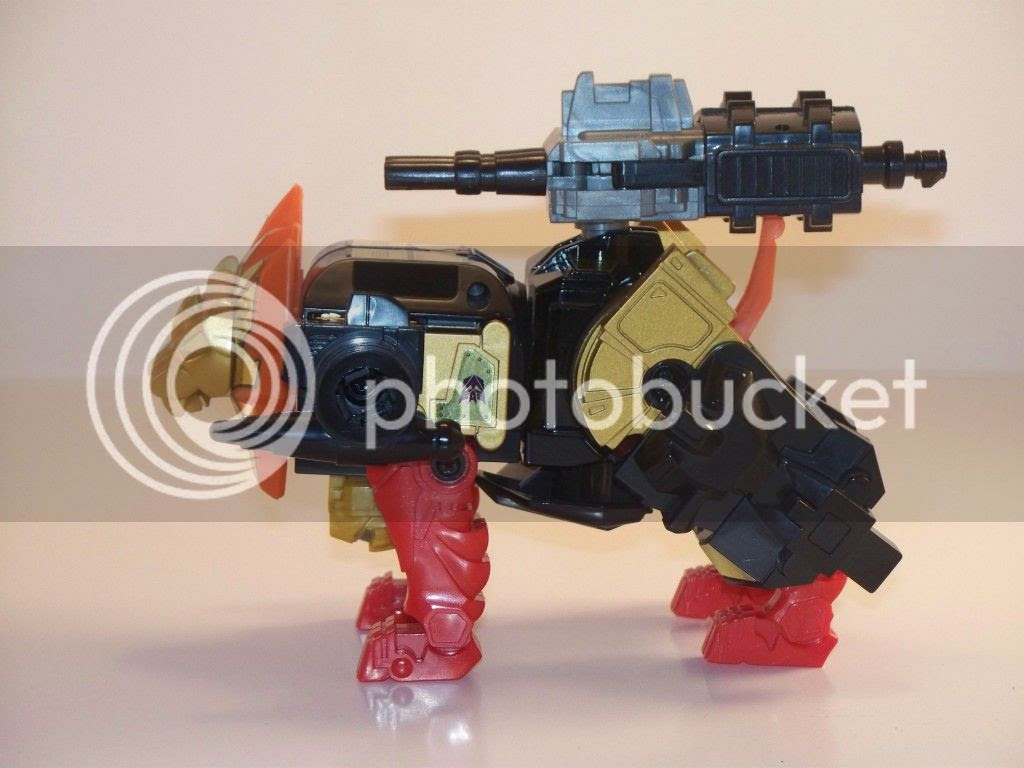 Gorgeous, isn't it? The wide body, the mane, even the legs are beautiful. It screams "King of the Jungle". I don't think a better lion has been released in other toy lines. Maybe the original Leo Prime, but I doubt it. I really like the change from yellow to gold plastic. Just comparing the Welcome to 2010 version to pictures of the original, the gold just seems to go better with the black.

If only that awesome lion mode translated to an awesome robot mode. The main thing I dislike about this mode are his arms. Razorclaw has the shortest, stubbiest arms I've ever seen. To me, he should have had arms that elongate like Divebomb or Rampage. They just throw off everything about him. 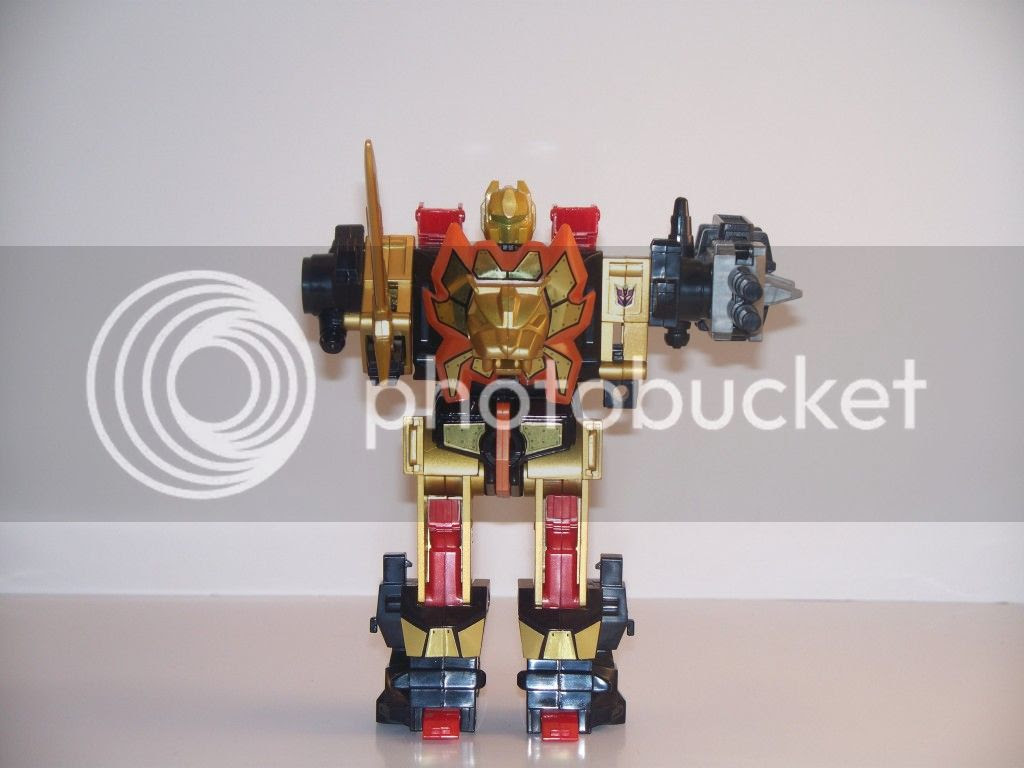 Because his arms are so short, it just throws everything off. I think that if Razorclaw's arms were just a tad longer, he could hold his cannon. They're just so out of proportion for his size! I'm so unnerved by them that I almost never put him into bot mode. 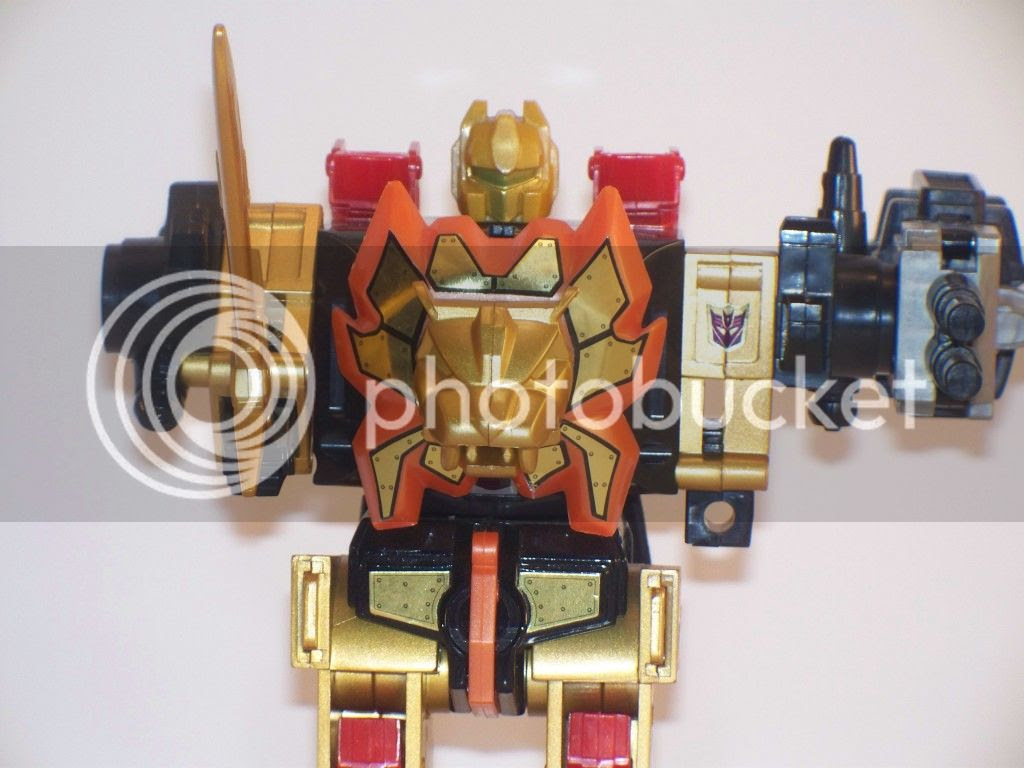 Taking everything into account while looking at this figure, I can't help but be a little let down. Razorclaw possesses perhaps the best lion alt mode of any ever released, but when coupled with his so-so robot mode, a lot is taken away. Maybe it's just me.

Does anyone know what the TFwiki was parodying on Razorclaw's profile?

Up next, Headstrong!
Posted by Optimal Omega at 12:00 AM No comments: