Some days I get good deals, others, I just break down and buy something just because I need something fun.  Nothing says fun more than a base. 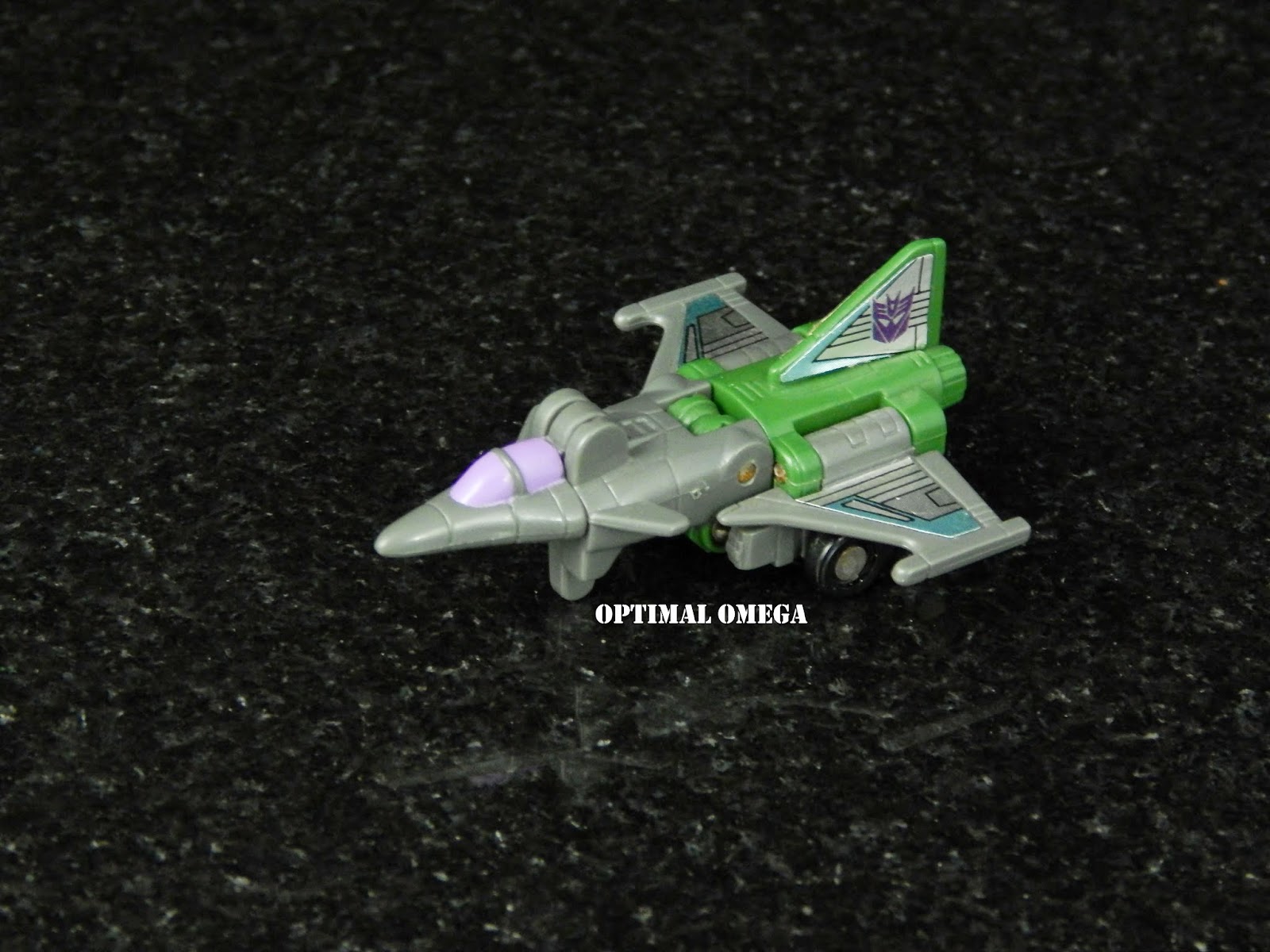 Skyhopper is a redeco of Storm Cloud from the Air Strike Patrol.  While Storm Cloud had a two-tone color scheme, Sky Hopper features decals on his wings and tail fin.  This adds to the overall look of the jet mode. 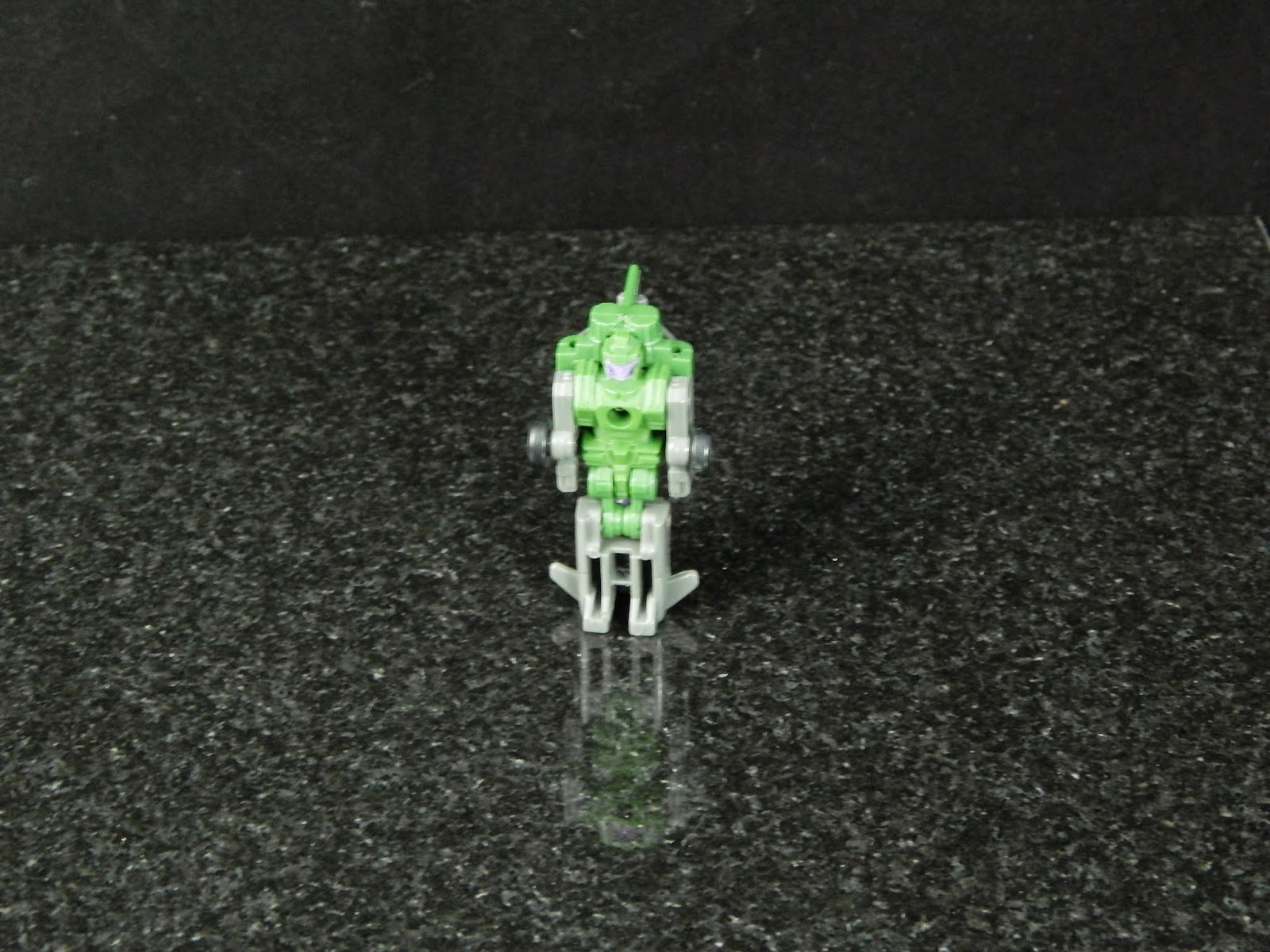 This picture proves that I have a lot of work to do on my black background photography skills.  If you happen to own a Storm Cloud, look at him and imagine it with a white face, green body, and gray legs. 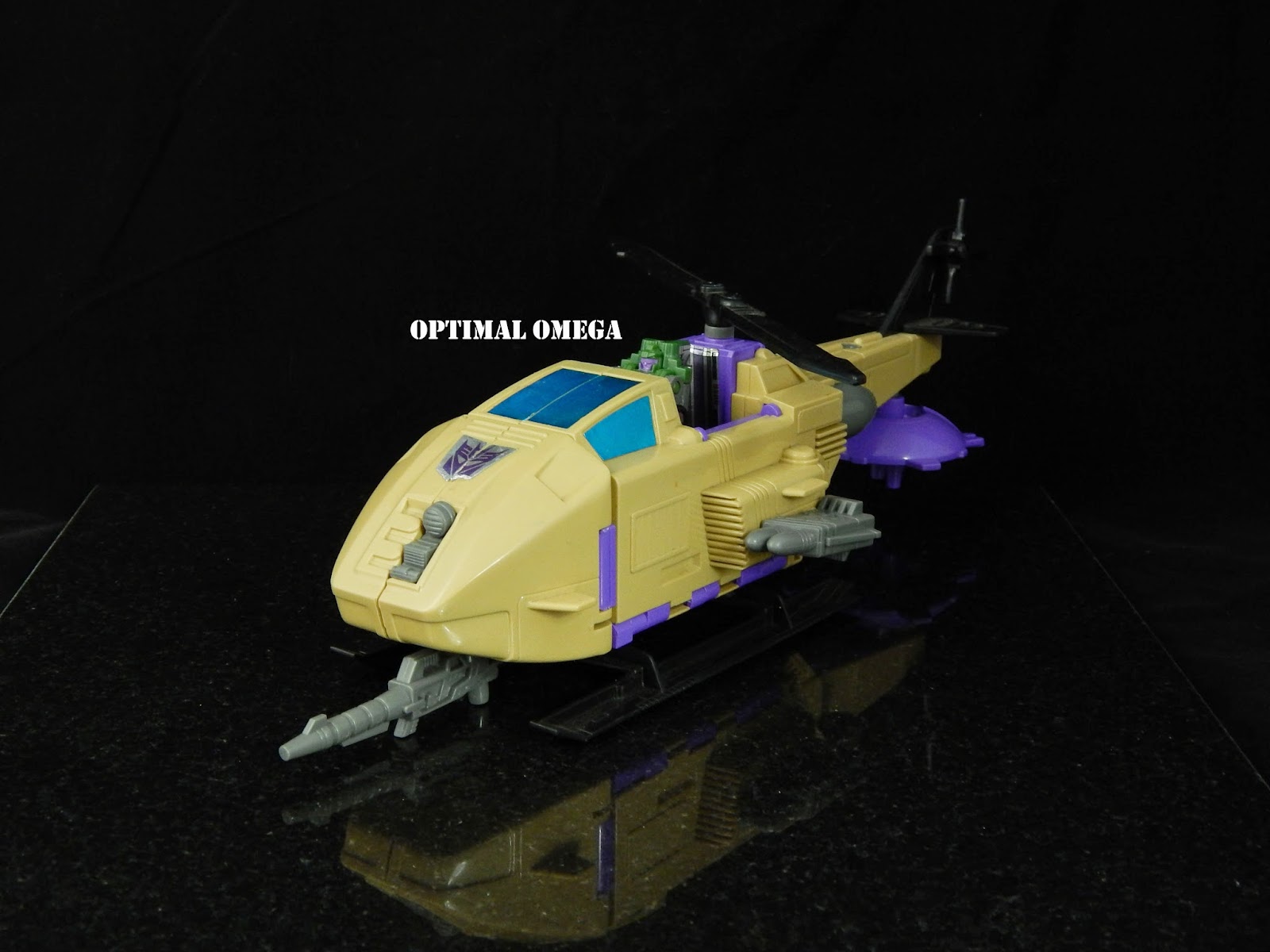 Skyhopper comes with a giant helicopter to pilot.  Because a robot that can turn into a jet needs to pilot a helicopter.  Skyhopper stands in the cockpit, and there is only room for one figure.  The blades rotate and there's enough clearance that Skyhopper isn't hit by the,.  There are gray missile launchers on either side of the chopper and a cannon mounted on the bottom. 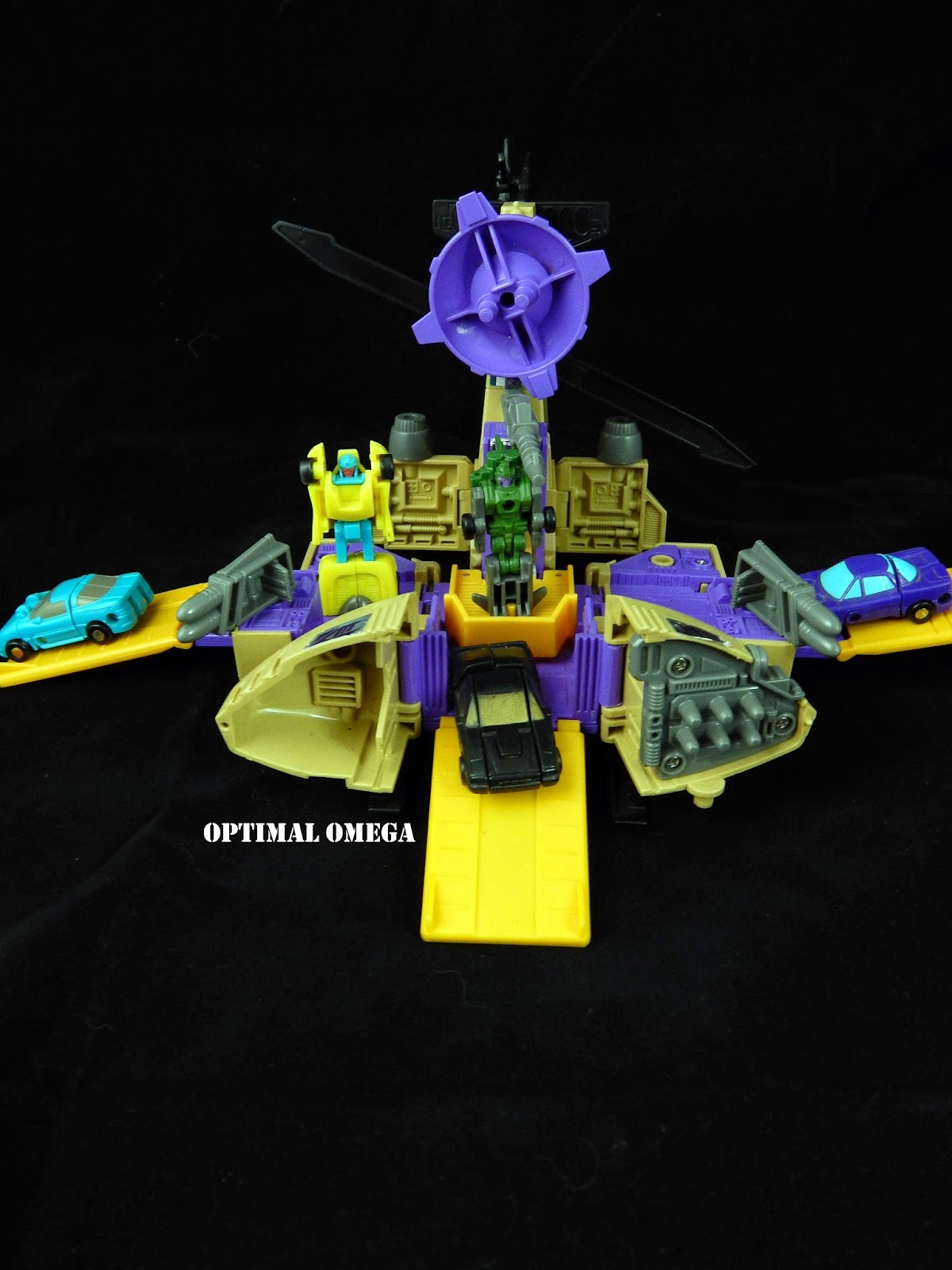 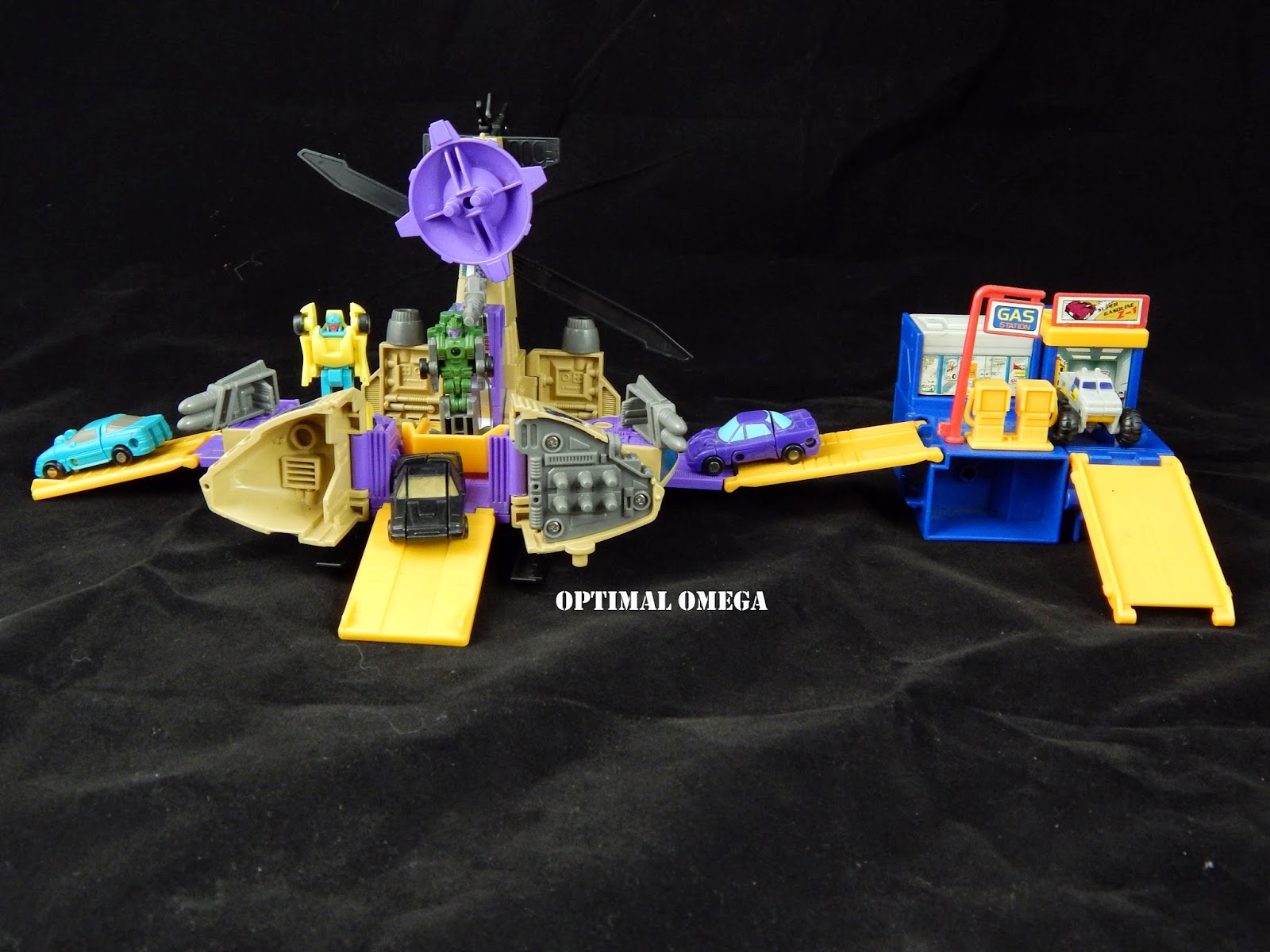 One of the fun things about Micromasters is the play factor.  Since they were designed to compete with Micro Machines, the play sets offered a lot of things to do.  I only own one other Decepticon set, and that's Greasepit, but it still connects well with the helicopter set.  Hopefully I'll be able to add more sets sooner, rather than later.  And no, that isn't me dropping any hints.  Micromasters are nice and all, but I'm kinda just getting them as the mood strikes me.
Posted by Optimal Omega at 12:00 AM No comments:

Now that I've gotten Air Raid, it's time to look at the new version of Superion. 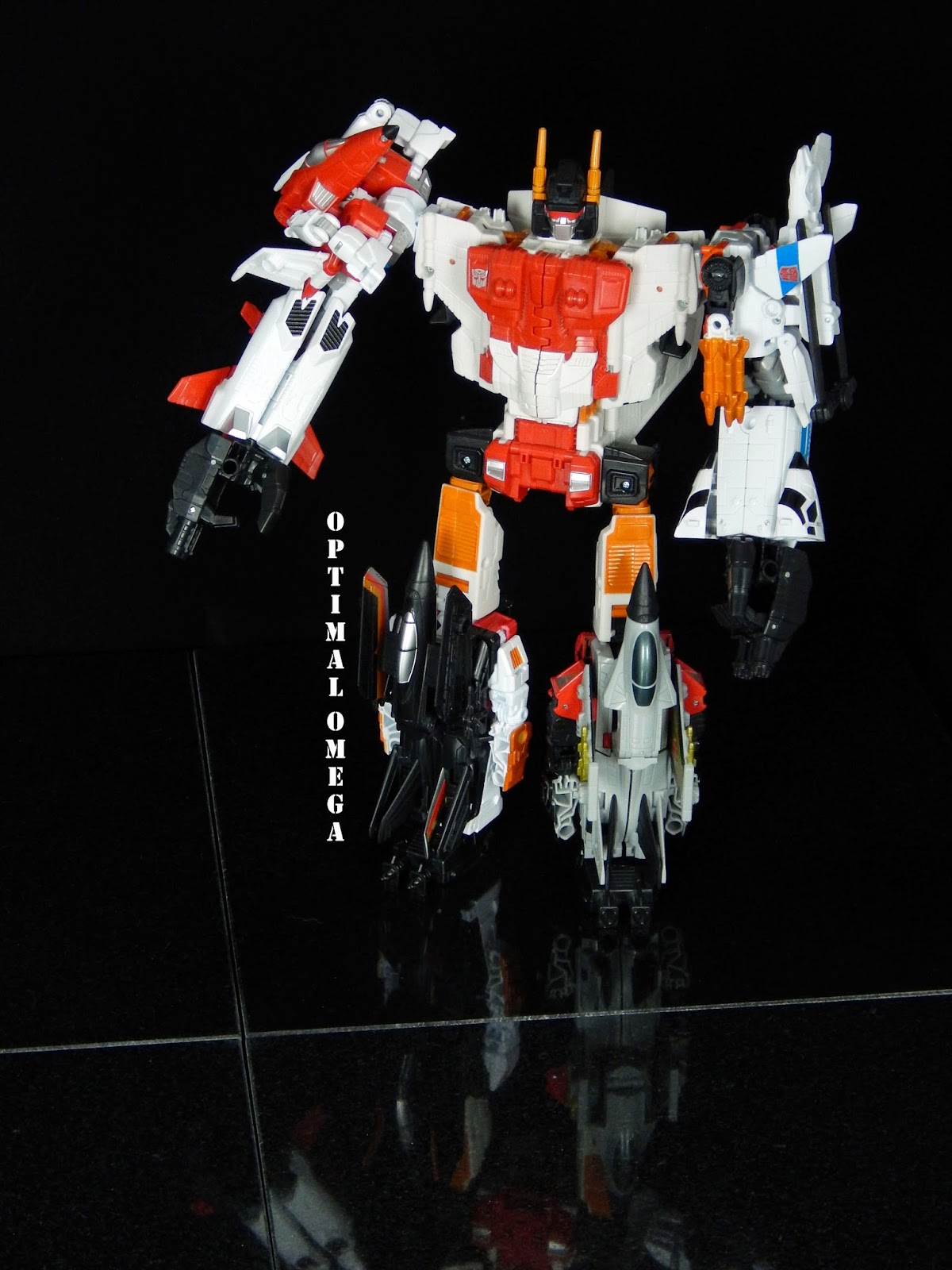 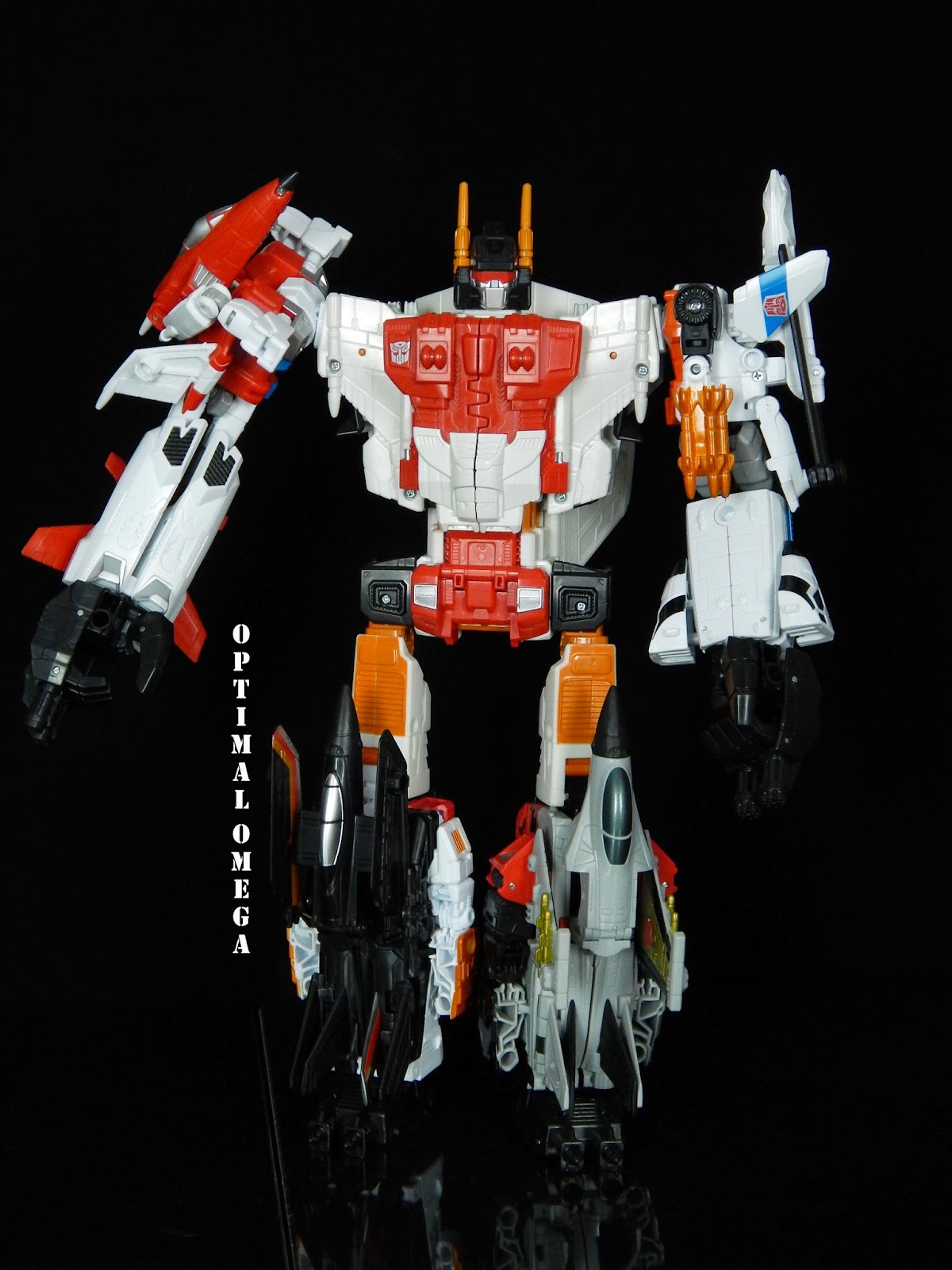 The first thing that I don't like: the really long arms.  And I mean really long arms.  Long arms that end in fists that are overly large.  Both are just too out of proportion.  I understand the fact that fists are designed to double as feet, but man, that those fists are just way too big.  It's funny that while the fists are so large, the feet wind up so small. 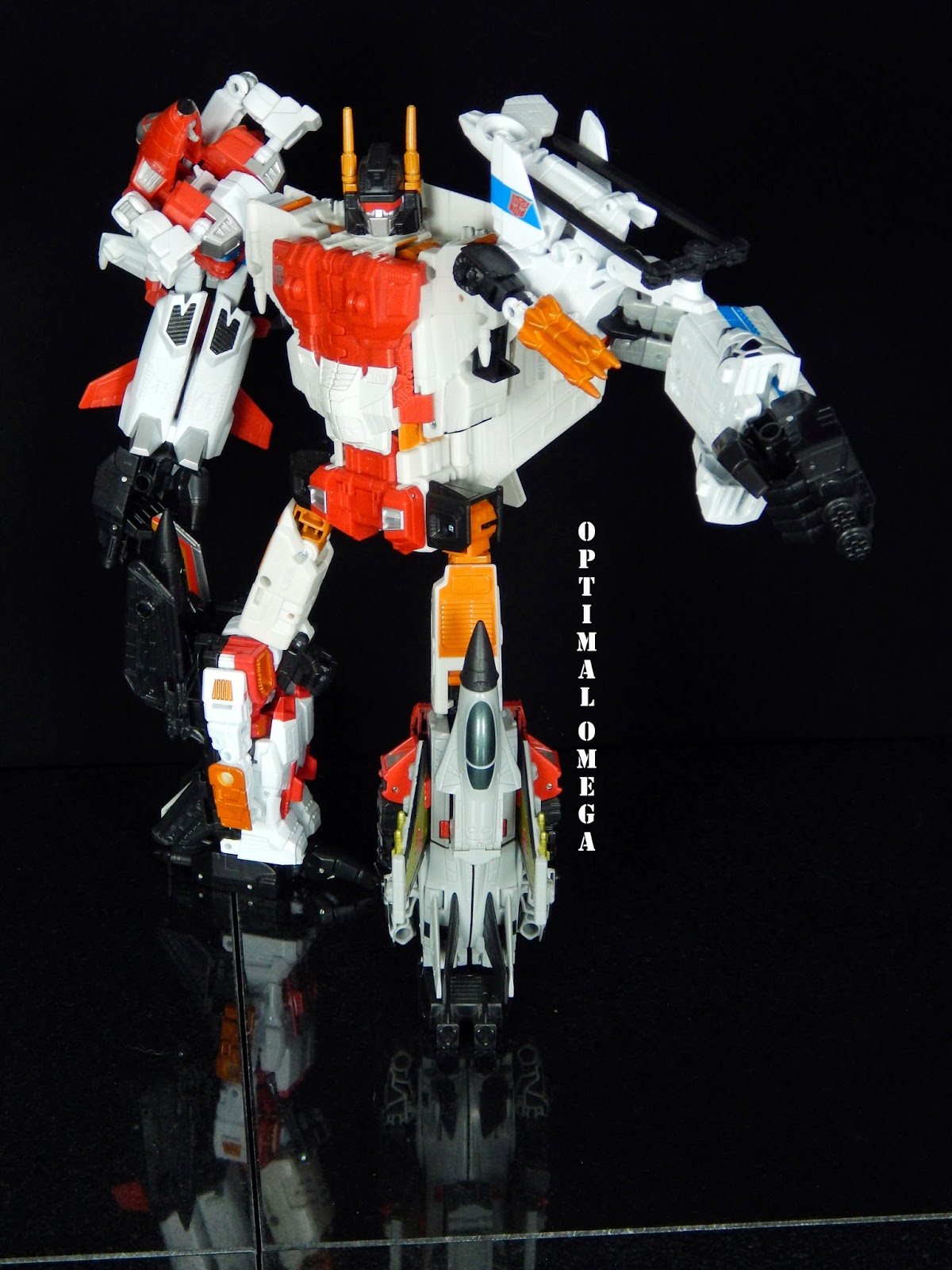 On the plus side, man is Superion capable of striking some poses.  Still, look at how weird the fists look. 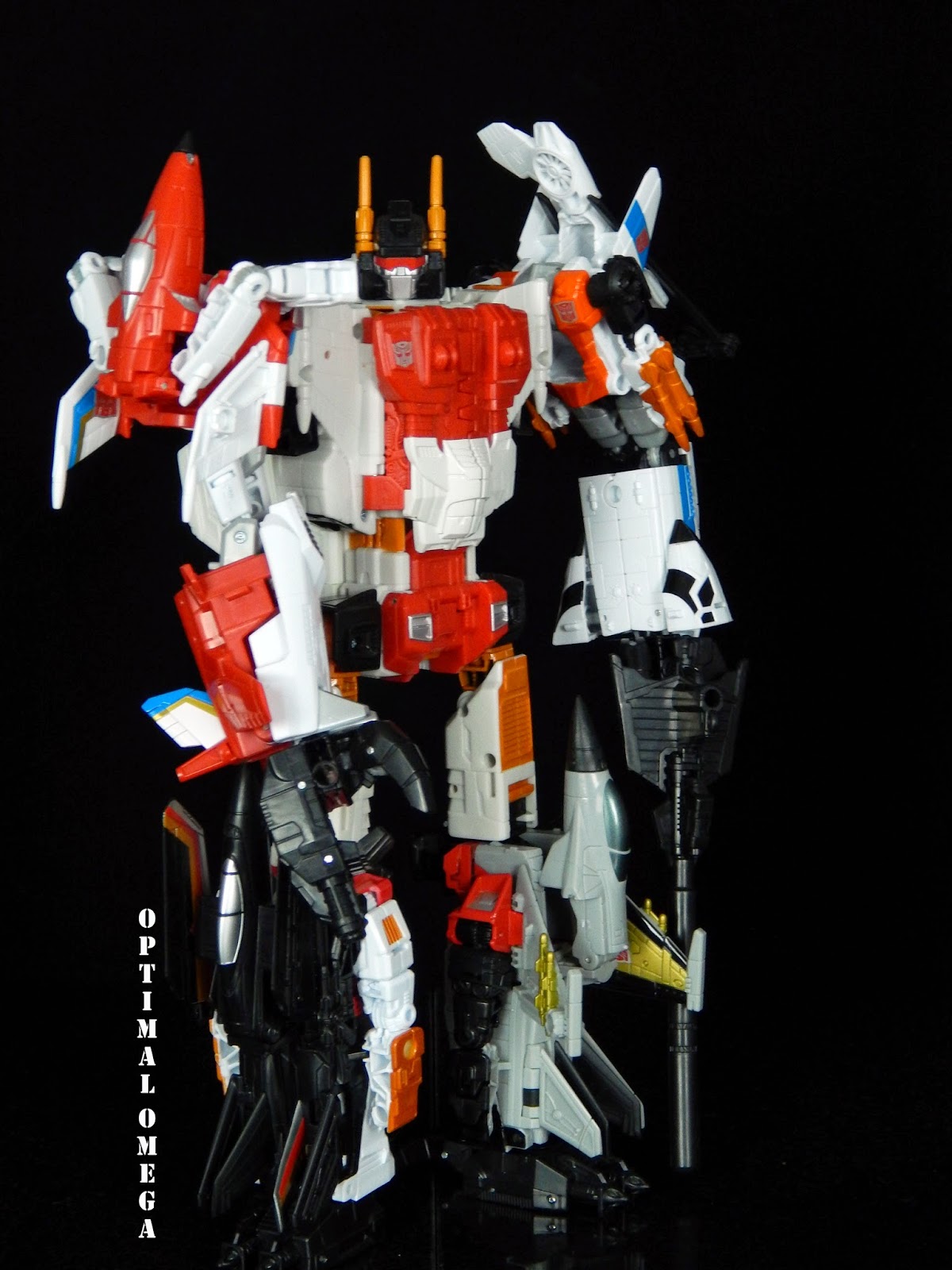 A minor quibble that I have is with the gun.  It doesn't seat well in the fists.  Mine is extremely loose and pretty much just moves to wherever it wants. 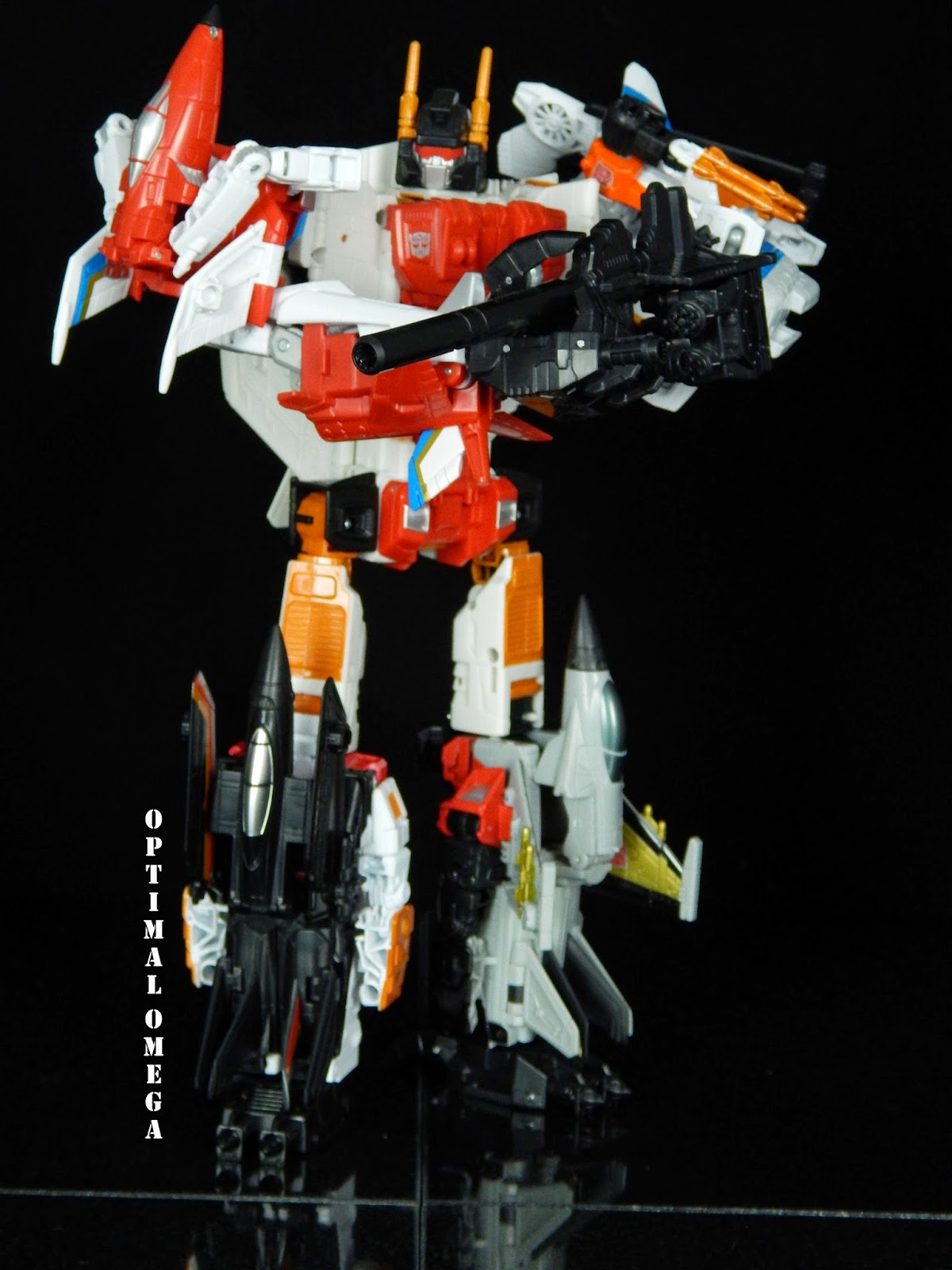 I really wish that my G1 Superion could pull off a pose like that. 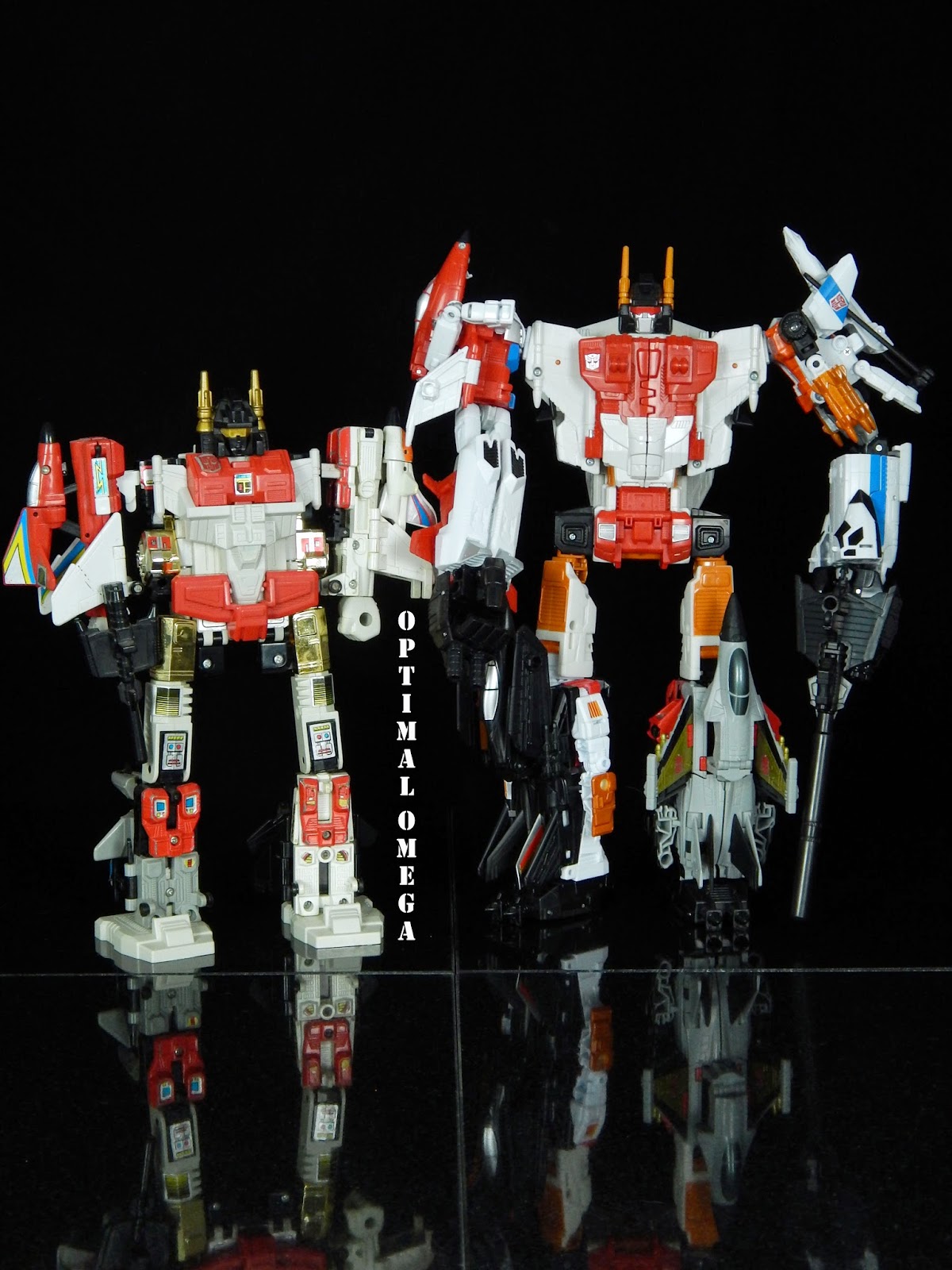 Let's just end with a shot of G1 and Combiner Wars Superion.  This was meant to be a really in depth review where I'd talk about what I liked and what I saw as problems with this new line of combiners, but I really can't muster the energy to write about these guys anymore.  I'm apathetic about the line, and I think that what little I wrote shows that.

Posted by Optimal Omega at 12:00 AM No comments:

So I finally decided to ship Air Raid from my pile of loot at BigBadToyStore.  I actually let him sit there for a bit before I shipped him, really, because I was having way too much fun with my Masterpiece Star Saber.  But, know I have him.  Instead of a full review, we'll make this a quickie since he's just like the rest of the Aerialbot limbs. 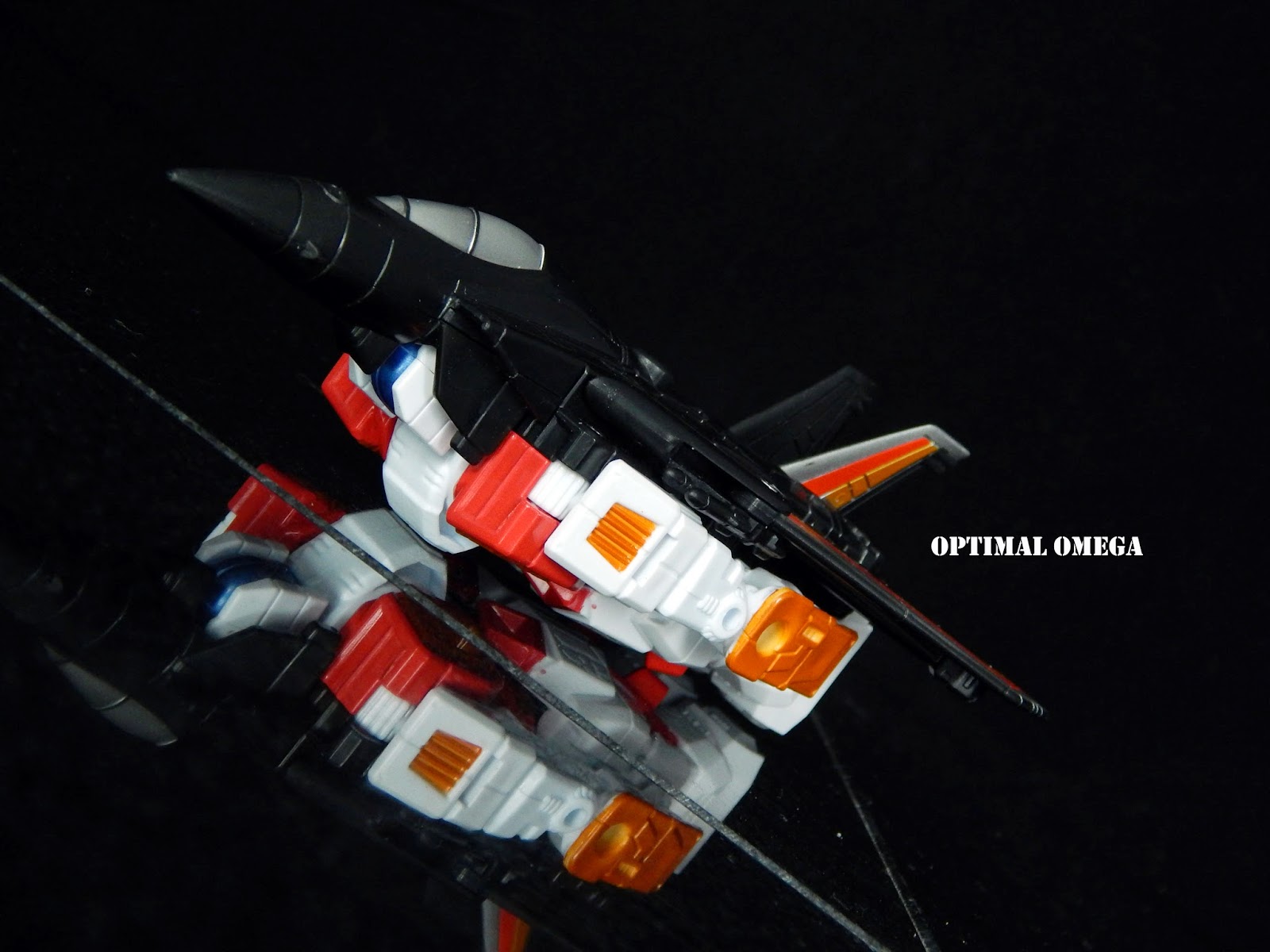 Air Raid has perhaps my favorite jet mode out of the limbs.  His wings are moveable and his tail fins are rubber.  One downside to Air Raid, he comes with a comic in place of the collector's card.  I'd rather have the card, to be honest. 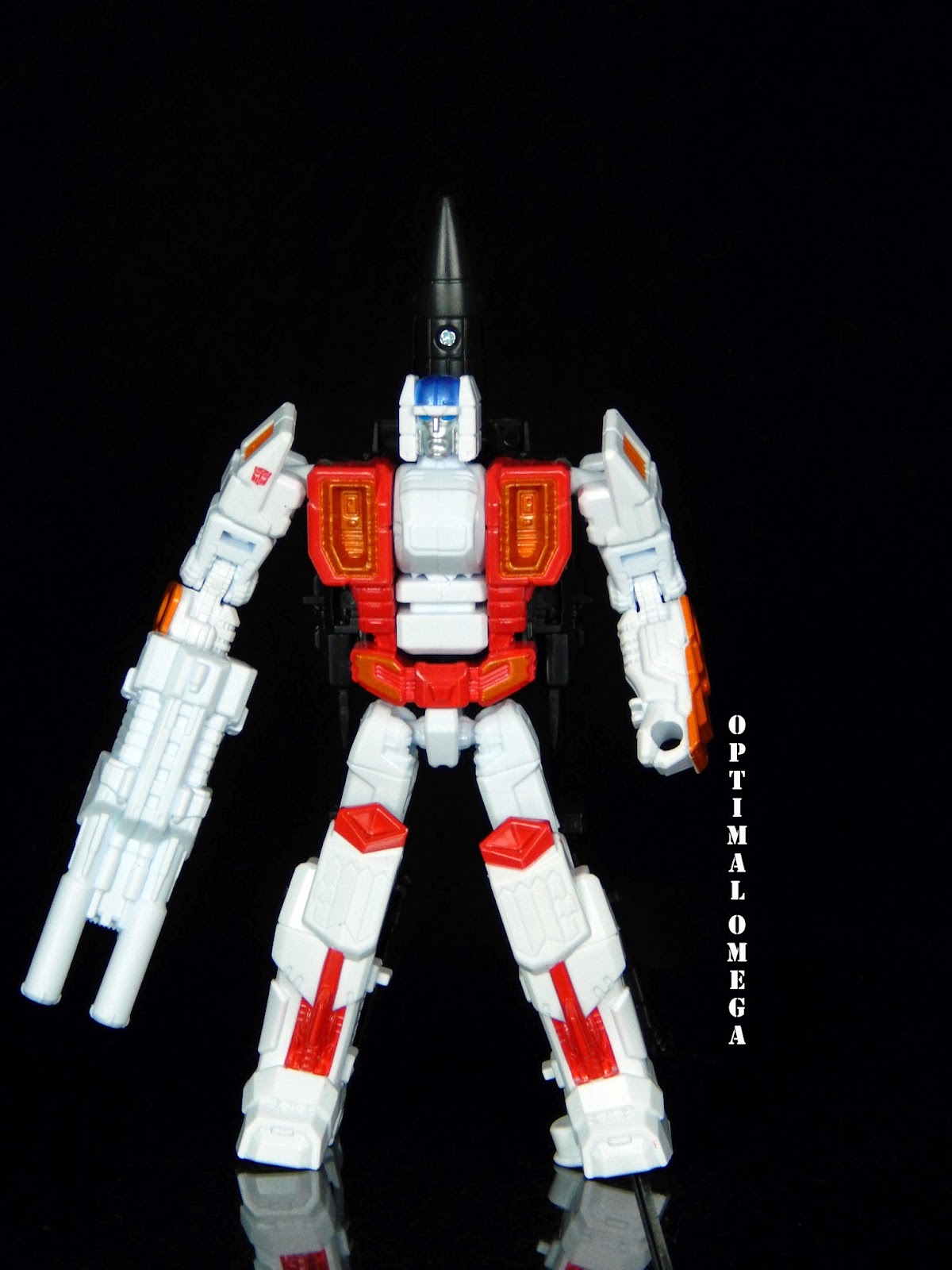 Quite a bit of Air Raid should look familiar if you already own Skydive since Air Raid is just a retool of Skydive.  I really like Air Raid's head sculpt. 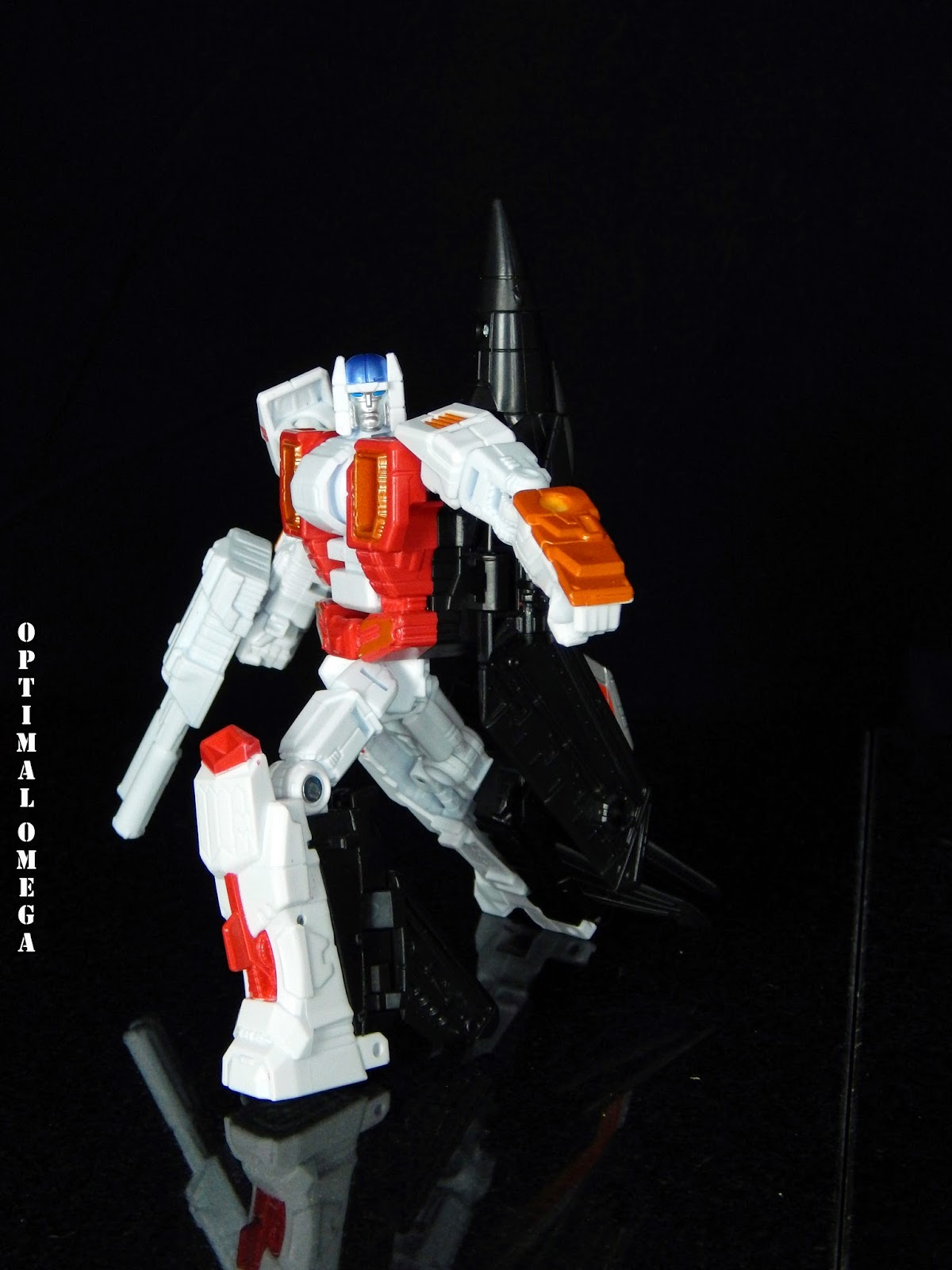 Poseability is what we've come to expect from the Combiner Wars line, so I'm not going to rehash anything I've already said before. 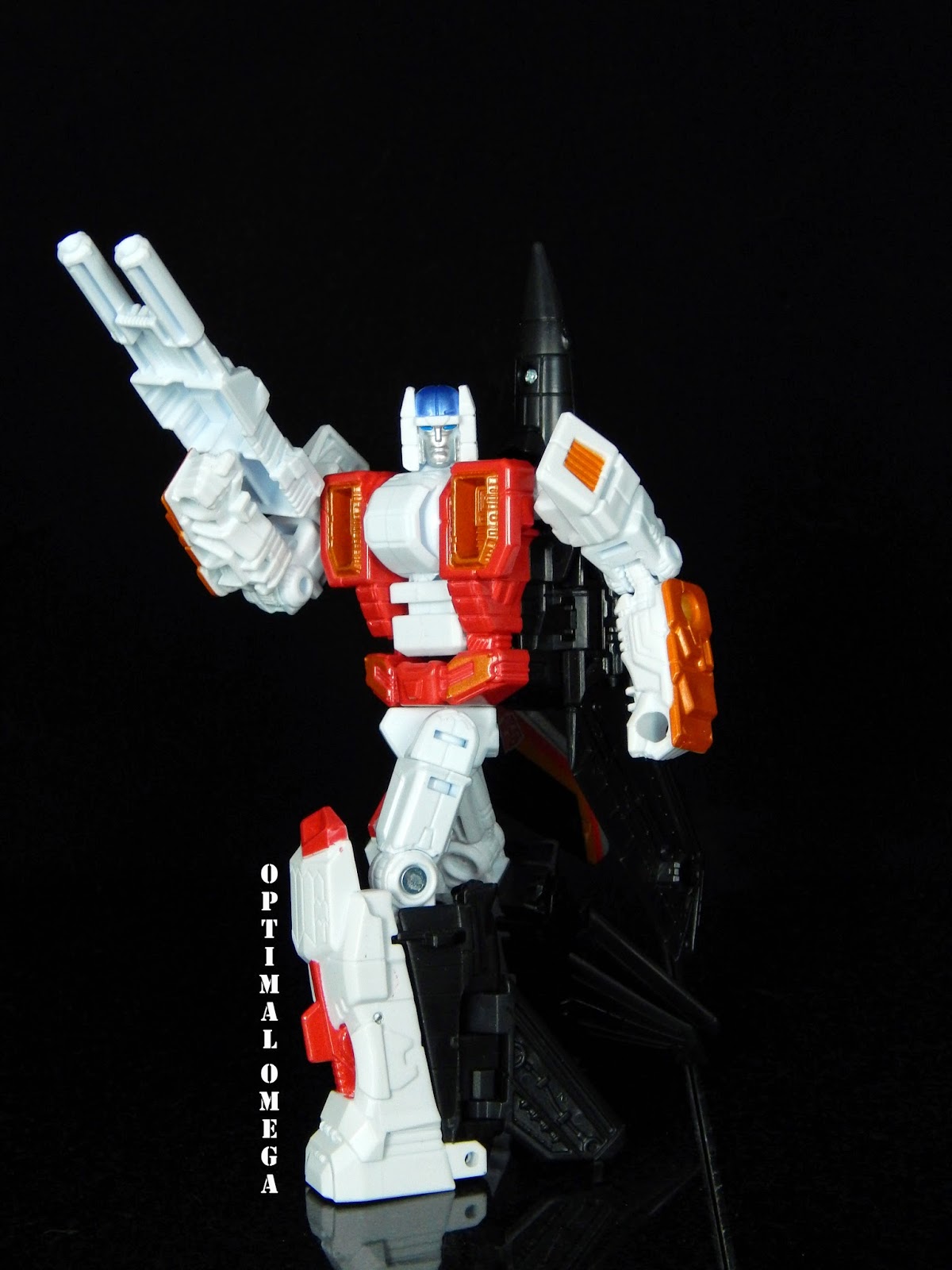 Still wish he would've come with a collector's card... 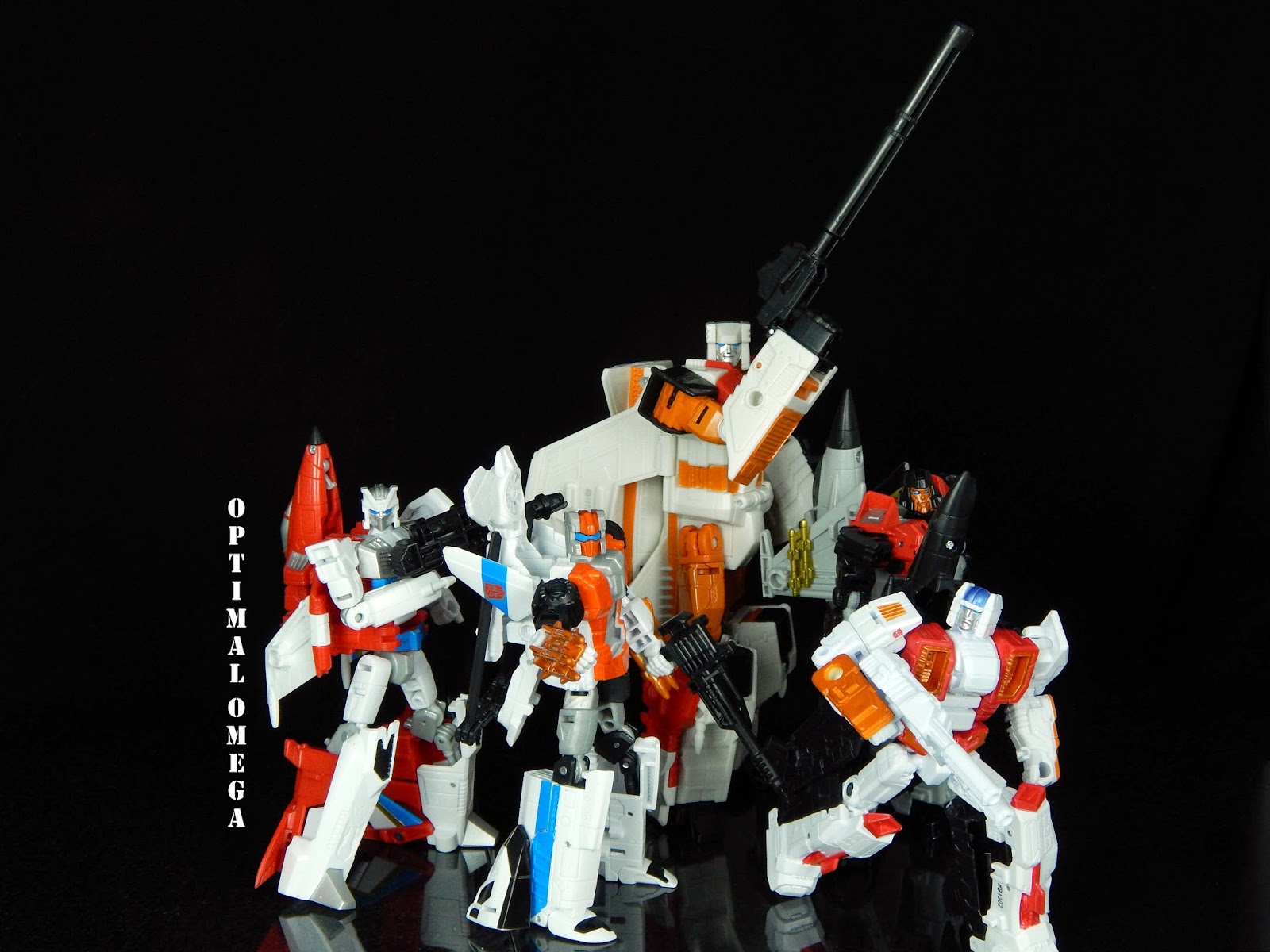 Group shot!  I'll talk about Superion in my next post.
Posted by Optimal Omega at 12:00 AM No comments: 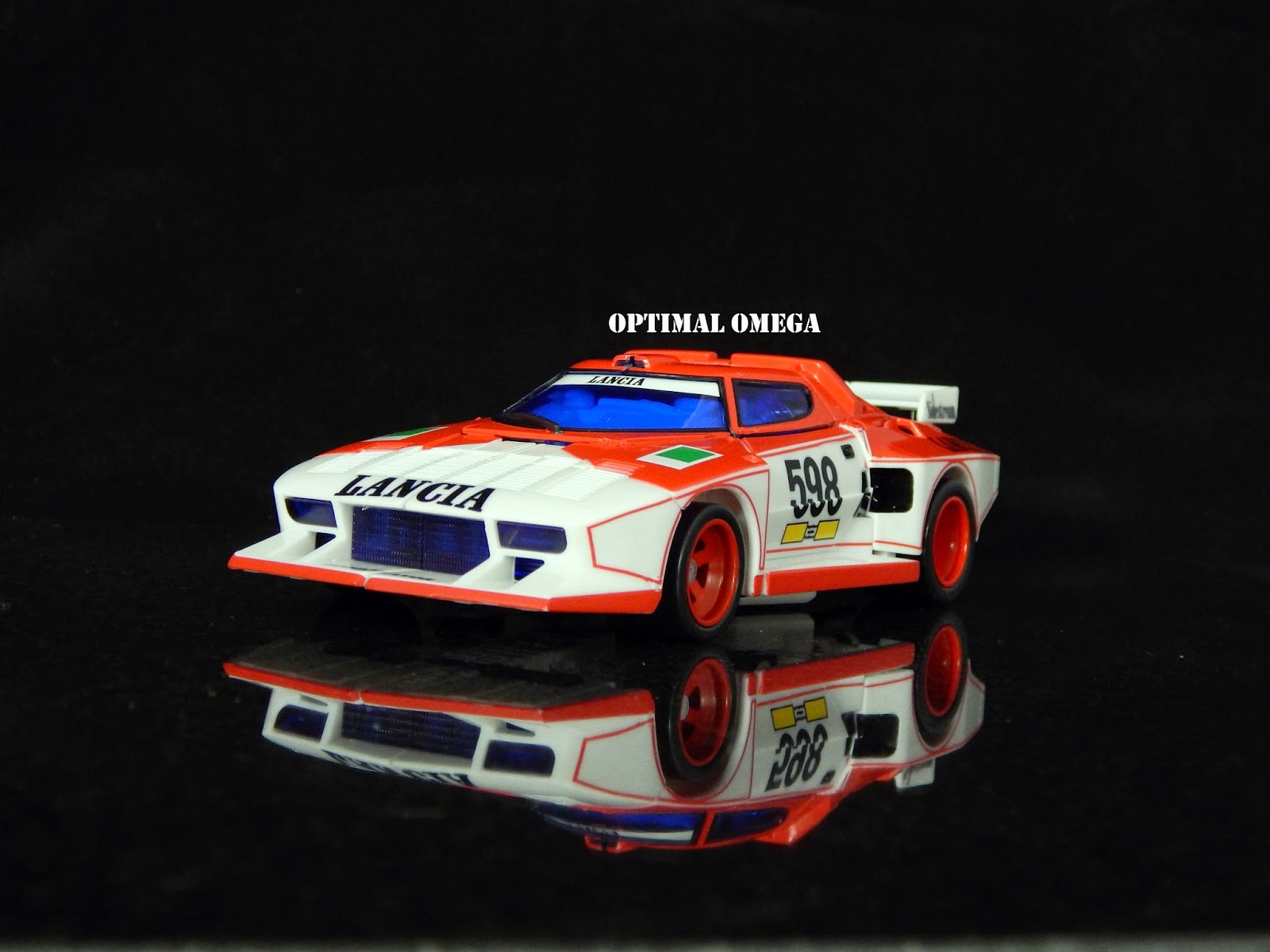 As those of you who follow my Facebook page know, I've had some issues getting my Masterpiece Exhaust.  Then again, no one follows my Facebook page.  At any rate, let me relate the long saga of Exhaust.  I pre-ordered him from BBTS as soon as the listing went up, only to discover later that they would not be able to carry him thanks to the fine people at Marlboro Cigarettes.  Everyone, it seemed, was dropping their listings due to the threat of legal action from the weasels at Phillip Morris.  Luckily, Colbey from Random Toy Reviews had a secret supplier that I will not name that he uses to get a lot of his foreign figures from.  He was nice enough to let me know who he uses and I was able to order from them and I was a very happy man.  That is until he was actually released.  I received an email stating that they weren't sure how many they were going to get, or when they'd be able to receive them.  Pins and needles, man, pins and needles.  Luckily, a couple of days before Easter, I was invoiced for shipping, which meant I was getting my Exhaust!  This was good, as I noticed that he was going for way too much on the secondary market.  No way would I pay those kind of prices.  Had I realized what a frenzy would be going on over this figure, I may have ordered a couple of extras.  Good way to pay for more acquisitions...
As with most Japanese figures, I was introduced to Exhaust through the Dreamwave comics and message boards.  I had no knowledge of Marlboor or his history in the line.  I don't think I would ever own an actual Marlboor Diaclone figurem but I am glad to get the Masterpiece figure. 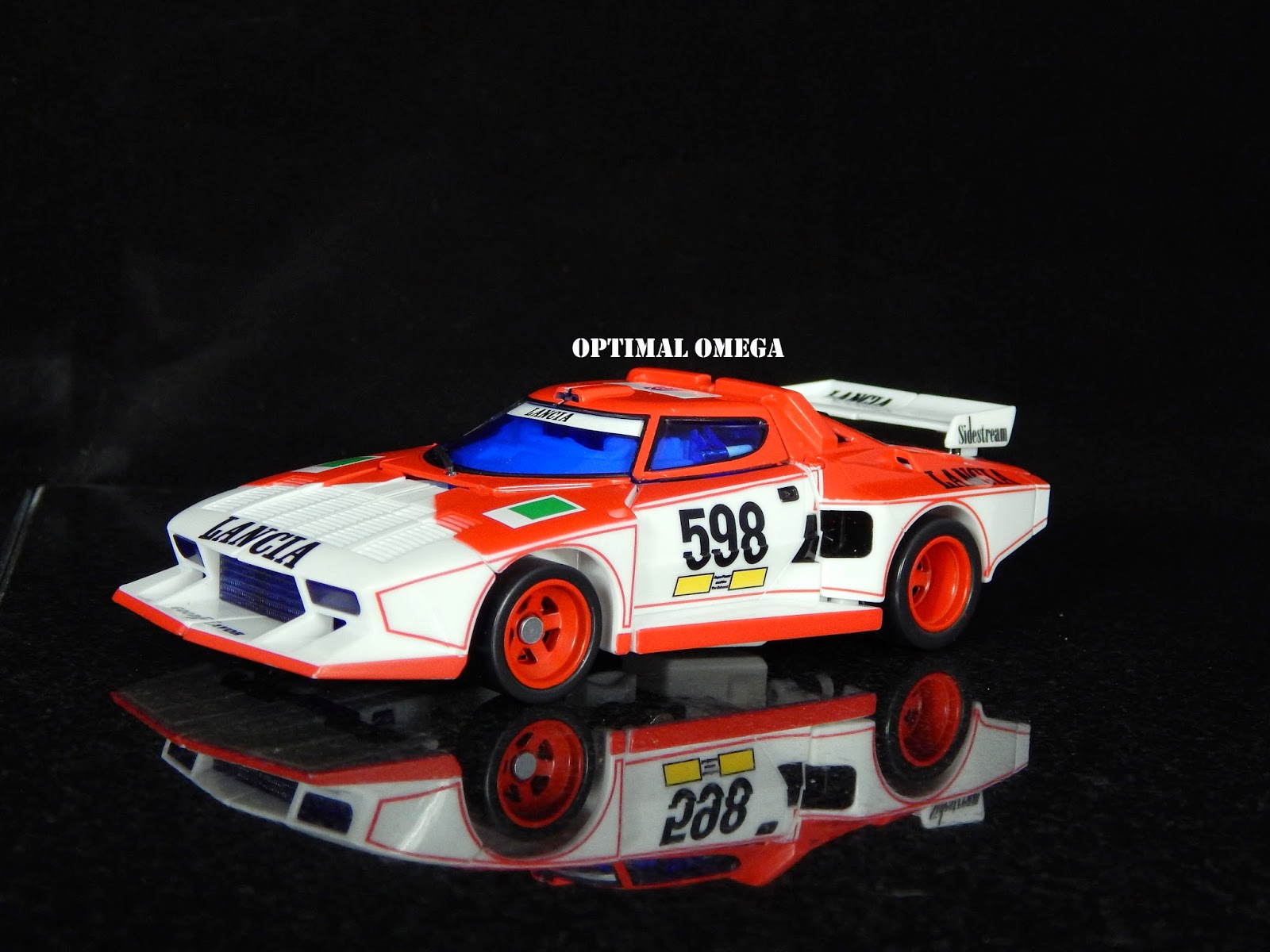 Here's Exhaust right out of the box.  We're not going to go into a lot of detail here because this is really just a repaint of Wheeljack.  The deco for Exhaust isn't spot on to Marlboor Wheeljack, but we all knew that going in.  Changes were made to satisfy the fine tobacco purveyors at Phillip Morris, but they still weren't enough. 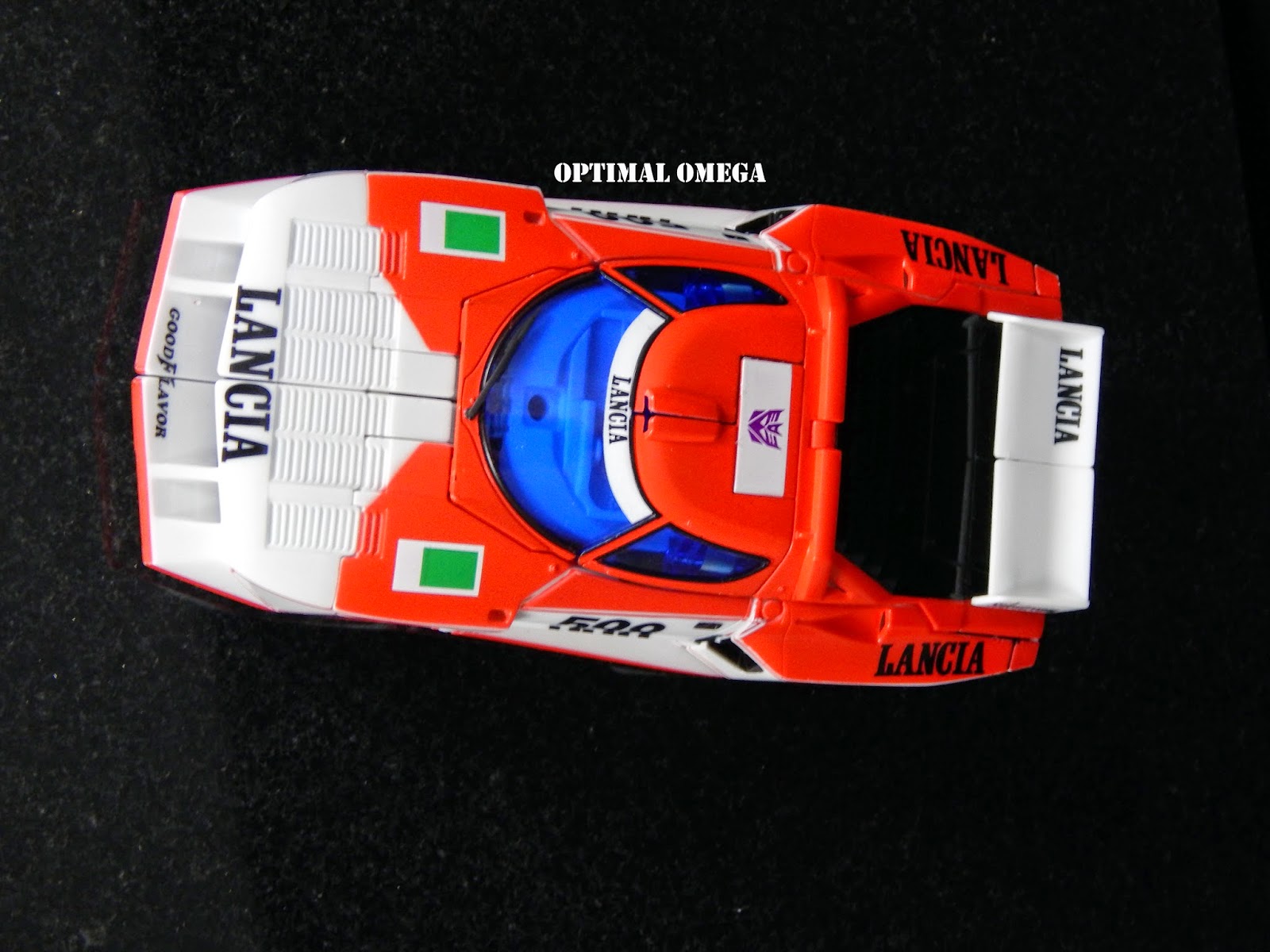 Here's an overhead shot showing off the deco.  The chevron on the hood has been altered, and the ones on the green boxes have been eliminated altogether. 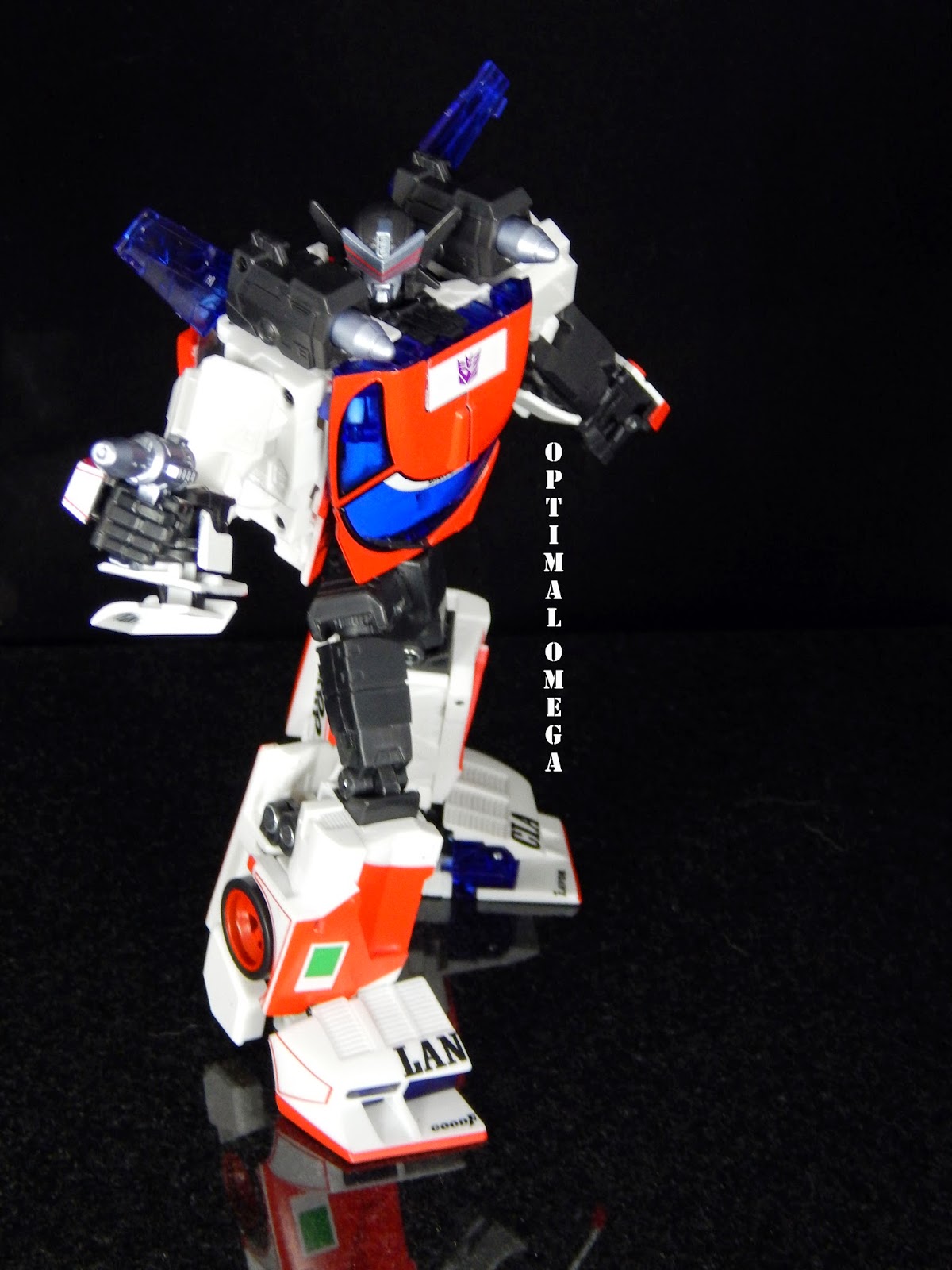 As nice as the paint job is on the car, I really love robot mode.  The red really jumps out at you.  Those purple wings are to die for.  And look at those twin mounted missile launchers!  The real star of the show, however, is the head sculpt. 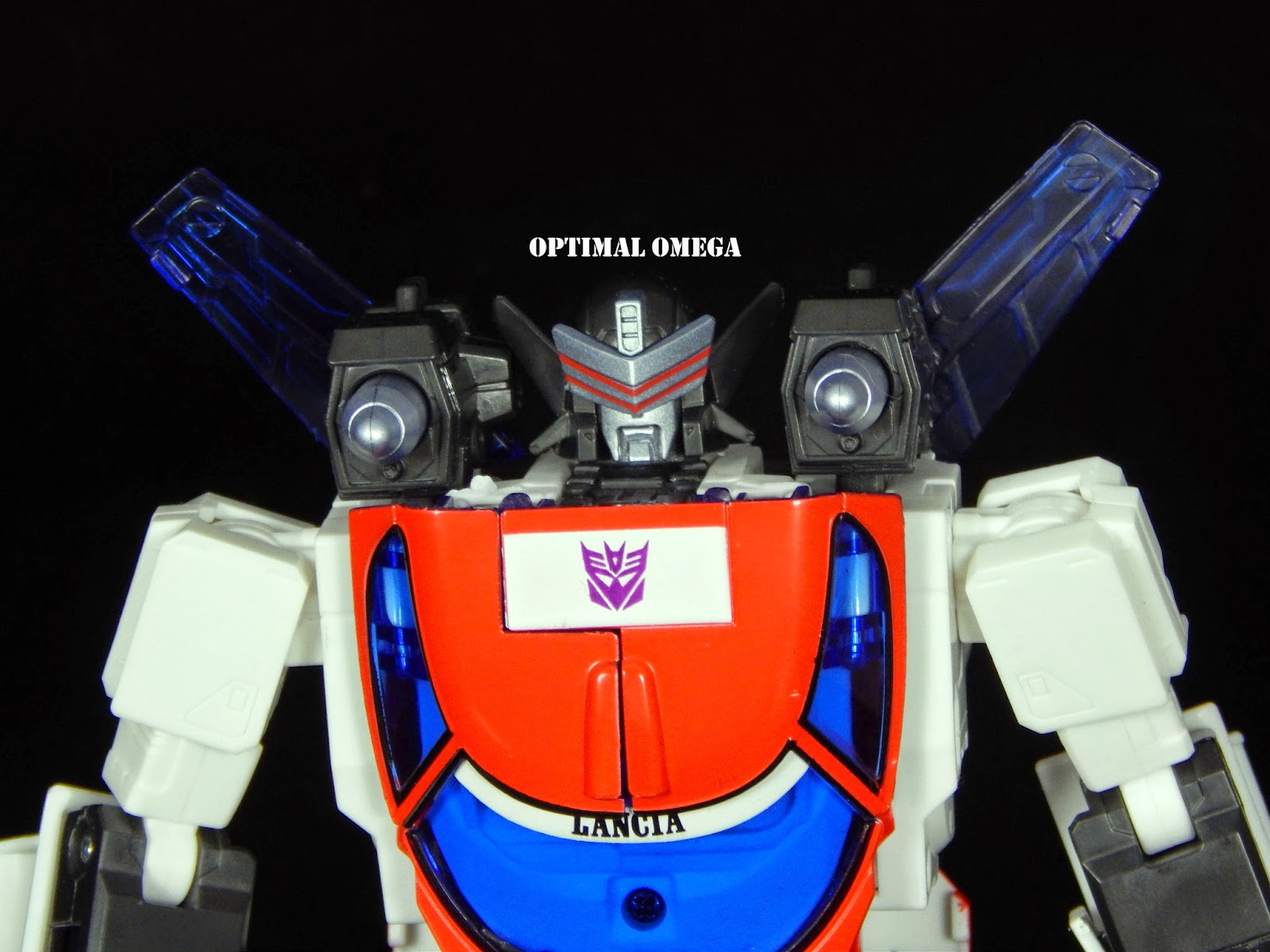 That visor is impossibly cool.  The stoic shape of the mouth, the points on the head, all of that just adds up to awesome.  The head is dead on to the original Marlboor sculpt.  I'm assuming, since I haven't actually seen Marlboor.  Still, it's damn cool. 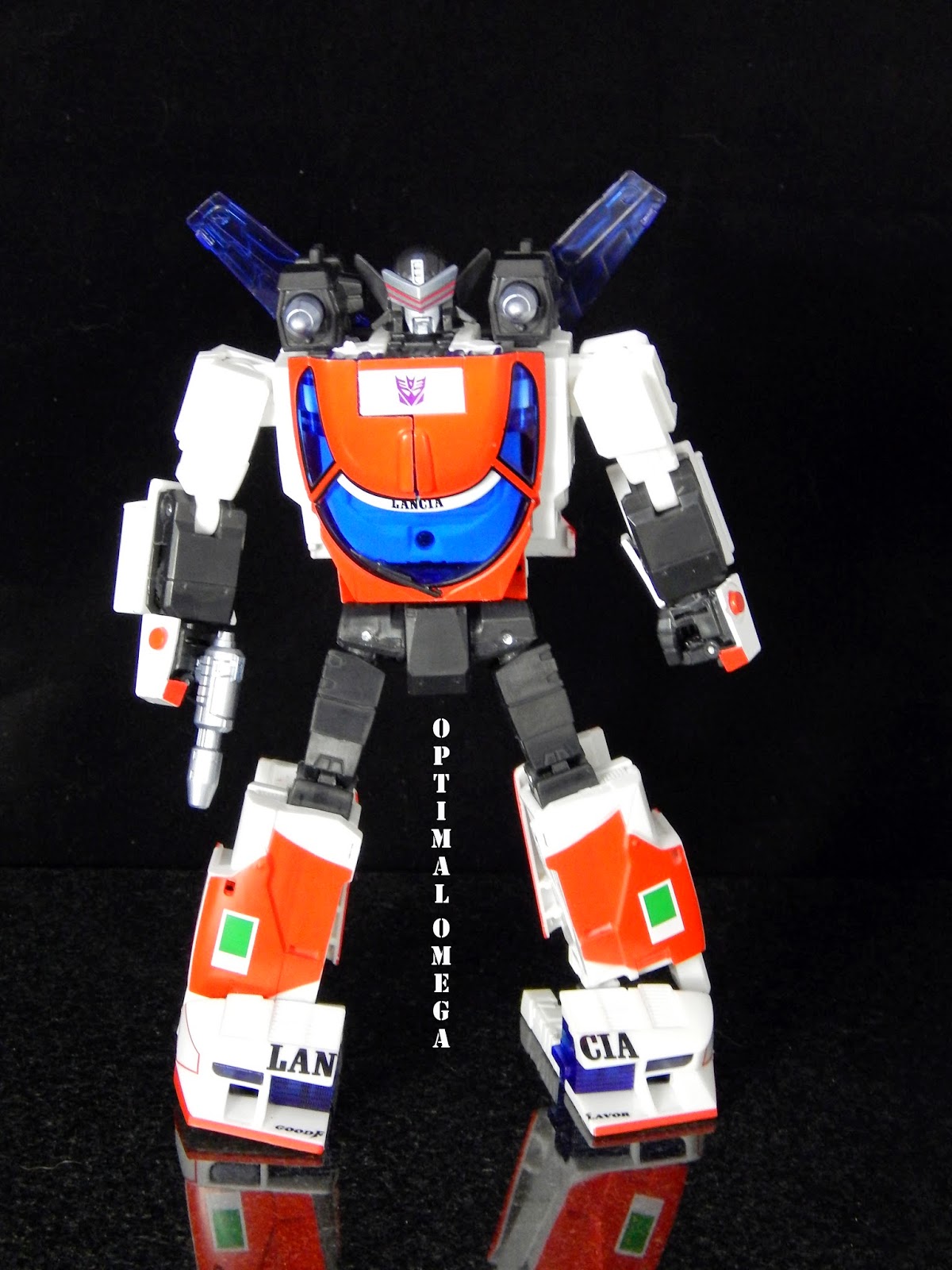 It's amazing what some different colors can do for a figure.  Yes, Masterpiece Wheeljack was already cool and incredible, but Exhaust just seems to jump right out at you.  Perhaps it has more to do with the fact that there hasn't been a Decepticon release in something like two years!  Come on, Takara, get us more Decepticons already. 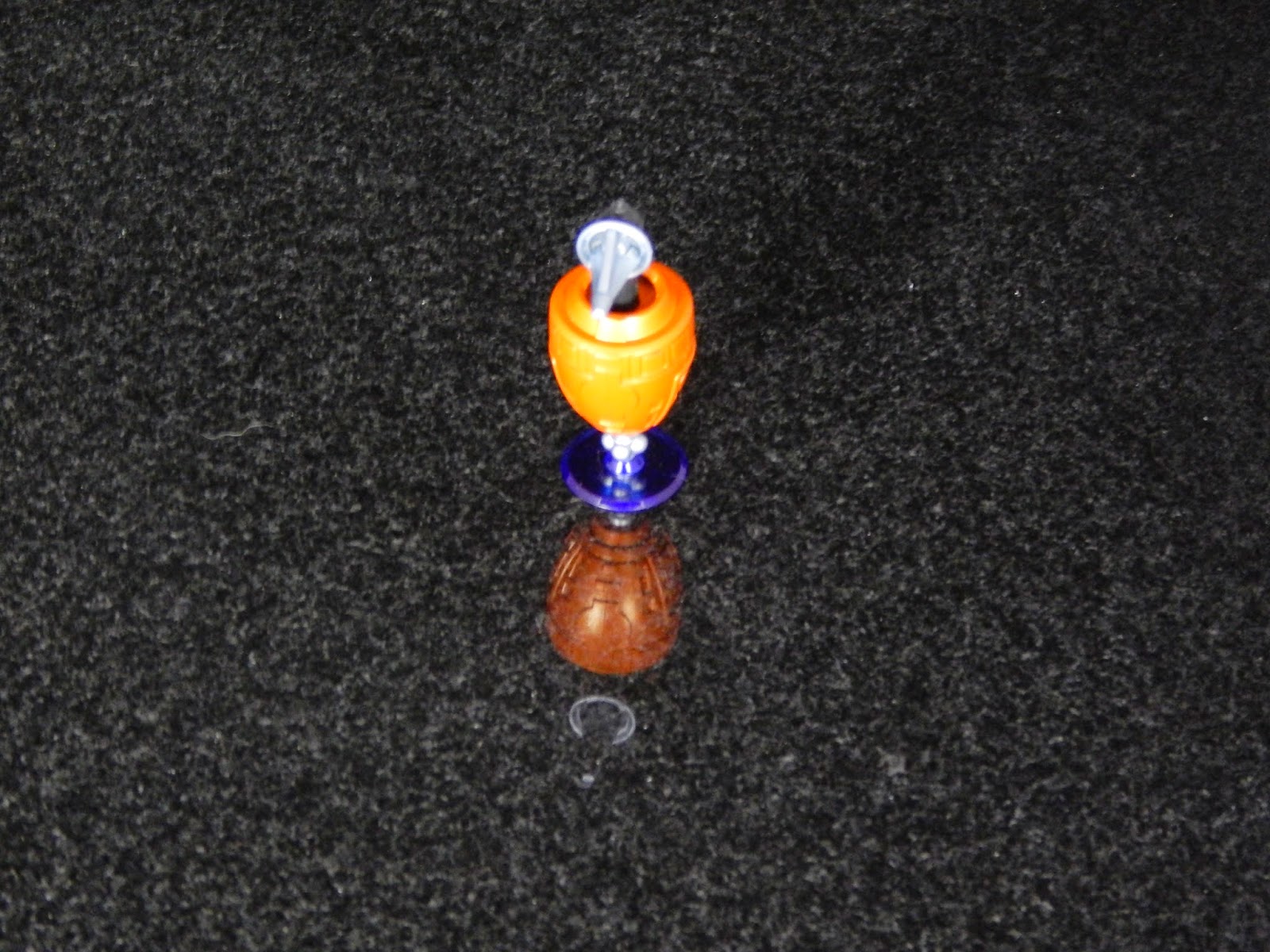 Exhaust comes with an Immobilizer as an accessory.  He can hold it in his hand, as well.  It's neat, I suppose.  Certainly G1 accurate. 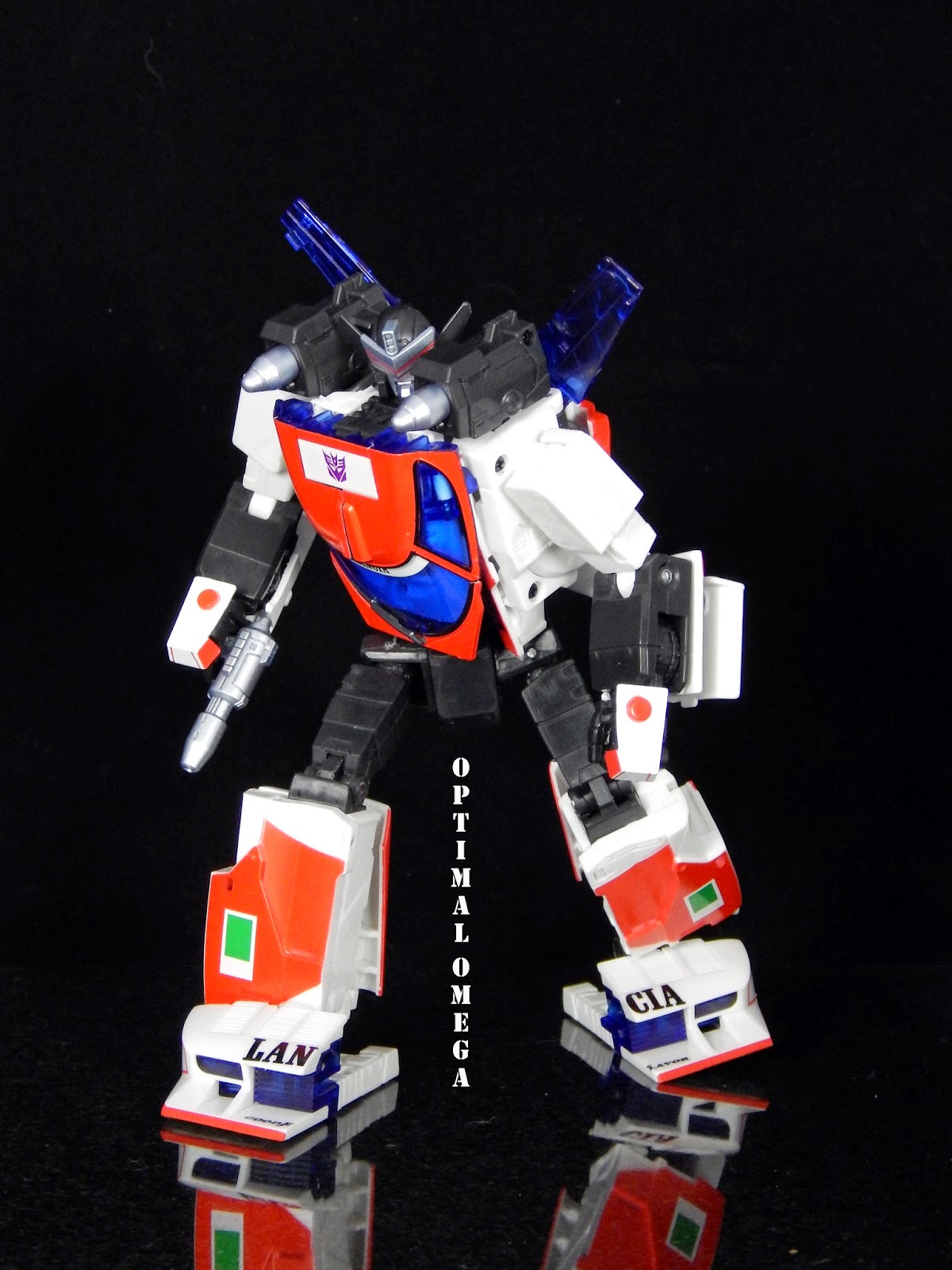 If you can, find Exhaust.  I wouldn't recommend paying the insane prices he's going for on eBay, but hopefully there are some that can be had at reasonable prices.
Posted by Optimal Omega at 12:00 AM No comments: