Jettison some weight, or I'll never make it to Cybertron!

I don't know if I've mentioned this before, but I have another kid coming.  That's kid number 4.  He's due in a month, and no, I don't have a name for him yet.  Due to the newest addition coming, coupled with the general malaise over Transformers that I experienced over the last 6 months, I've been trying to clear out some of the clutter in my collection.  Most of it was junk that I was holding on to for various reasons: childhood attachment, the need to have multiples, even in horrible condition, and just plain collection padding. 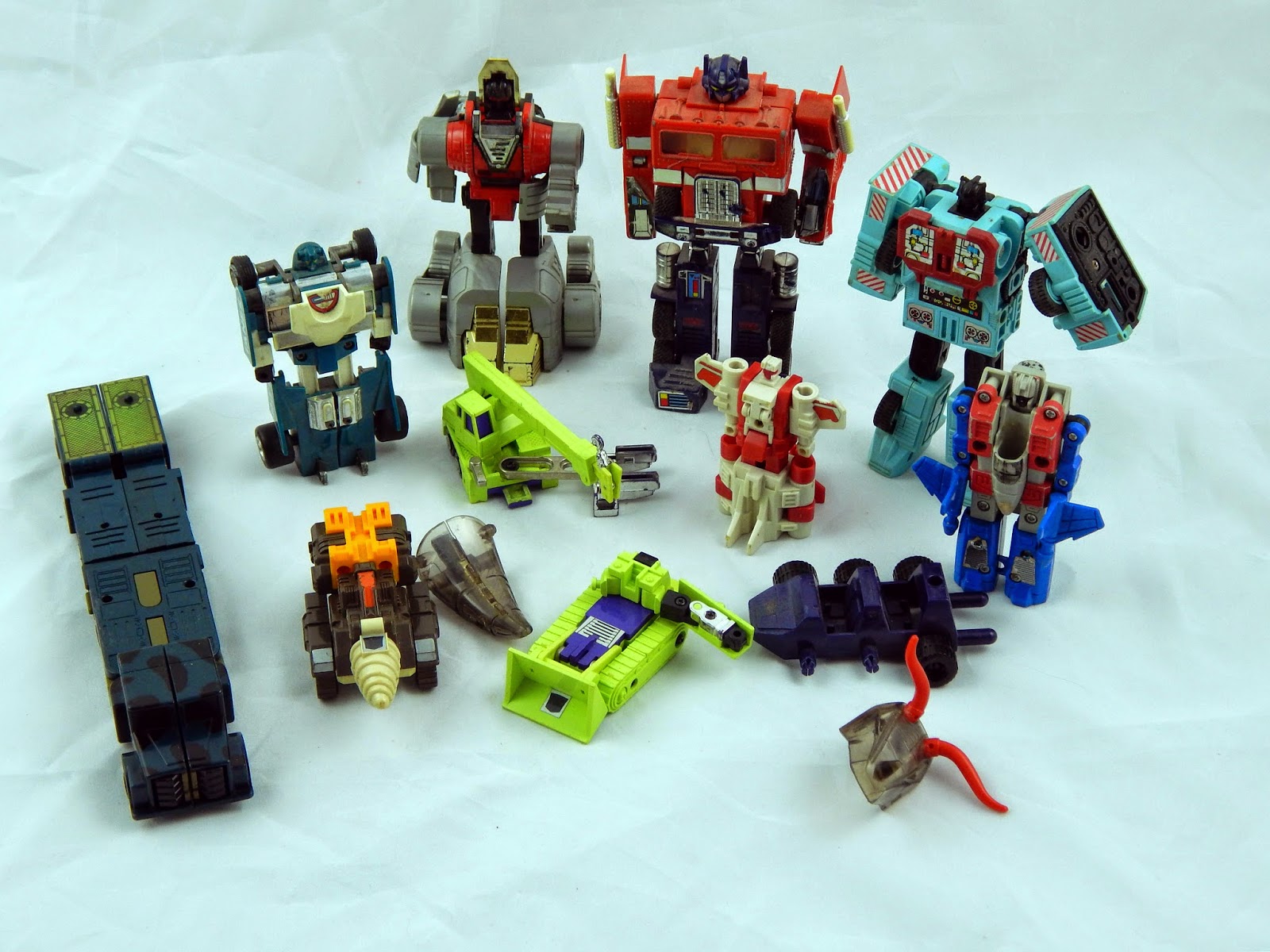 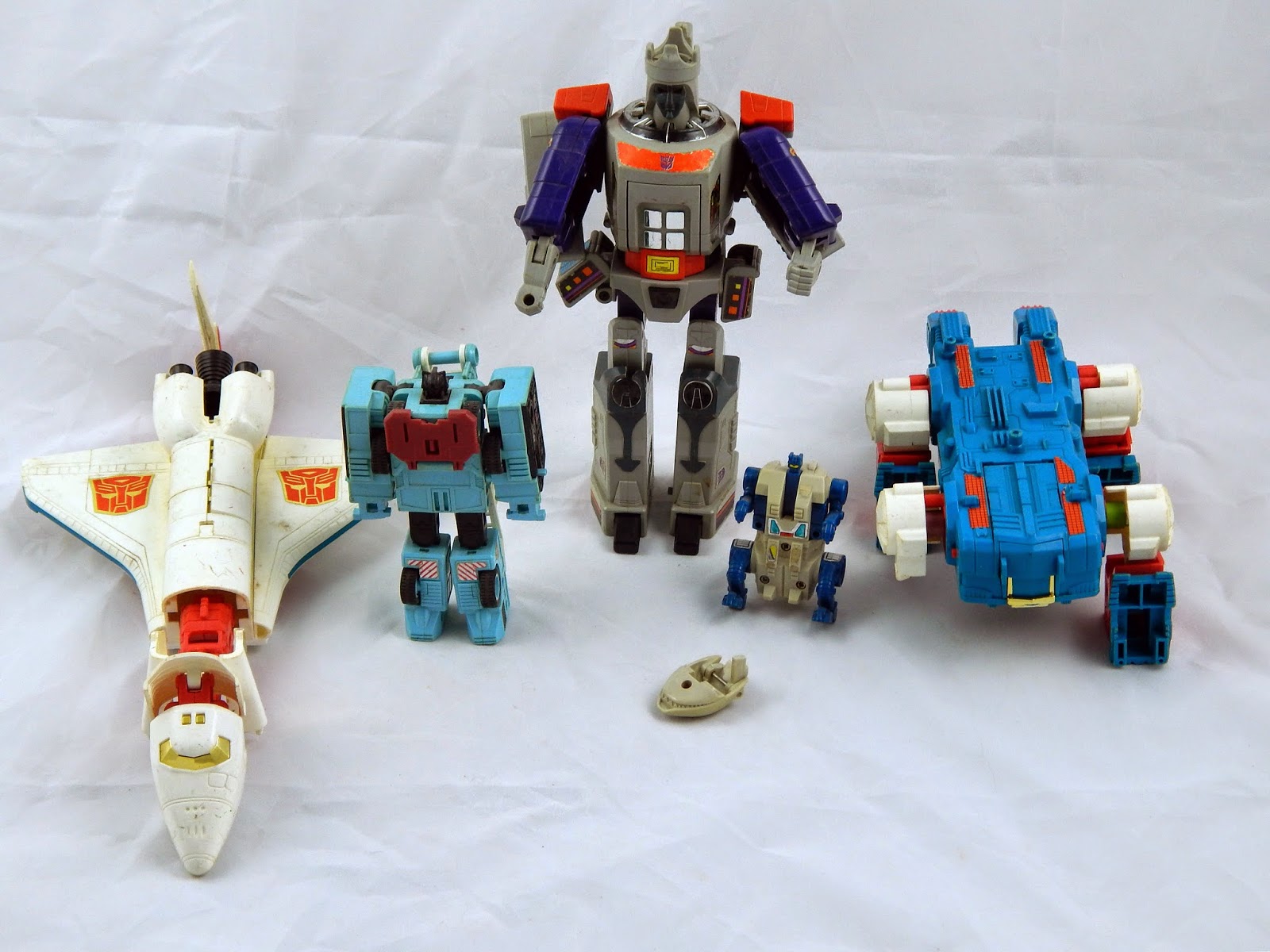 And this.  As you can see, it's all broken stuff.  Amazingly enough, it all sold at good prices, well, good prices for me.  Simple auctions starting off at $0.99 resulted in some nice pocket change.  More than that, it cleared some space.  Selling all of this on eBay taught me a couple of things that I hadn't realized before.  First, lots like this: 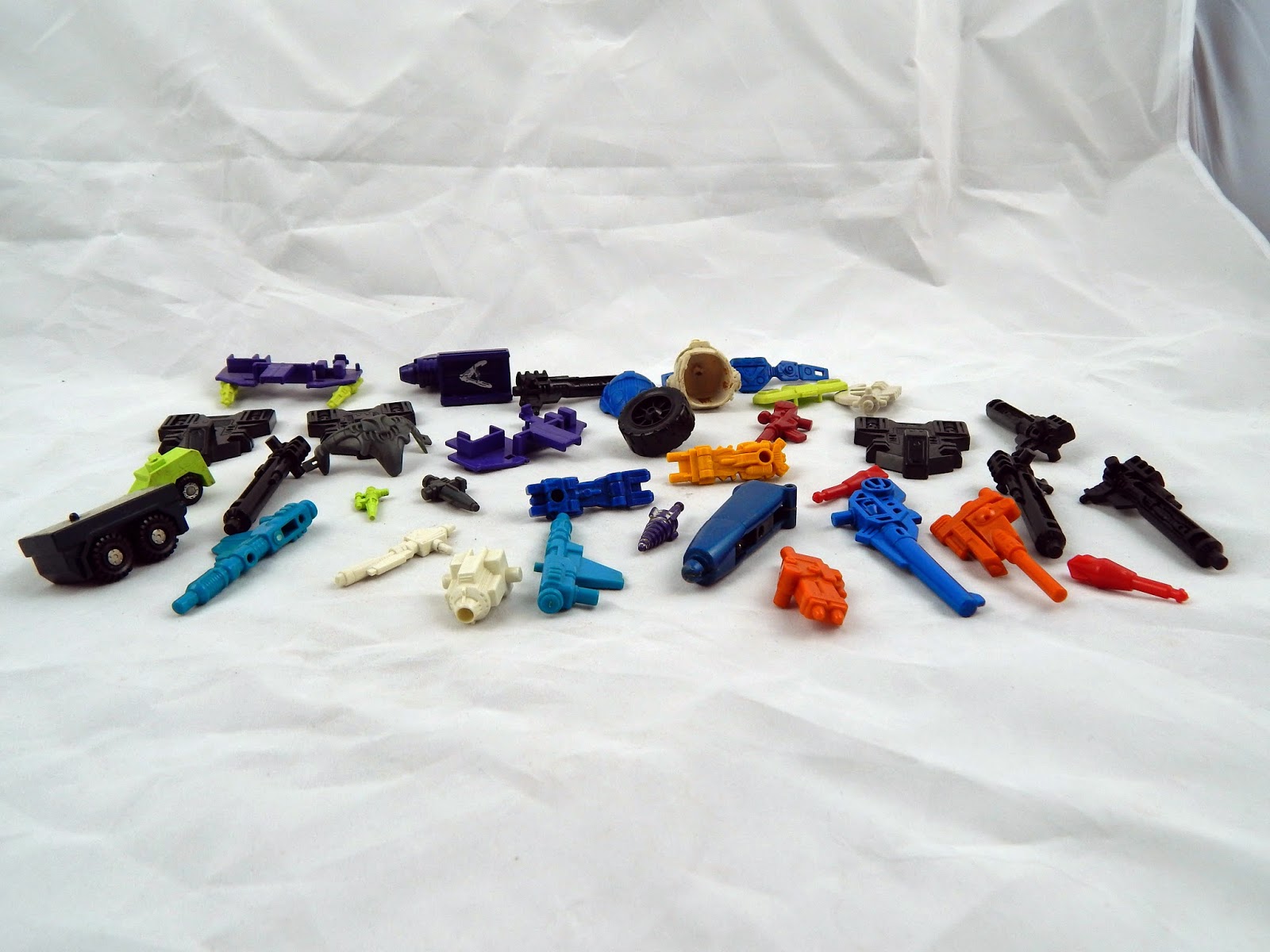 Seem to inspire a ton of bidding.  I sold a couple of lots of just parts and weapons and made a veritable killing.  I was going to just put lots containing weapons up for a Buy It Now of like $15.  I have really underestimated to market for parts.  Now I know, and am much wiser for it.  Still, I have to confess to not understanding the notion of paying so much for parts that aren't in great condition, but whatever.

I also learned that I have no clue on what to charge for shipping.  Afraid of overcharging, I wound up shelling out more for shipping.  After the first few auctions, I kind of over-corrected and just went with USPS flat rate shipping.  It cost a lot more, but it did get the items to the customers faster, had built in insurance, and tracking.  I'm certain that it affected some of the final auction prices and I could've gotten more for what I sold, but I never once got a negative feedback on shipping prices, so there's that.

I'm also going to confess to getting a little sell-happy.  At first, I was sure that it would be hard to part with any part of my collection, but that hasn't been the case.  Now I'm looking at other things to sell to clear clutter: boxes, paperwork, my entire G.I. Joe collection.  My wife thinks I've been bitten by a bug., which she is way too happy about.  Happy wife, happy life.
Posted by Optimal Omega at 12:00 AM 2 comments:

Email ThisBlogThis!Share to TwitterShare to FacebookShare to Pinterest
Labels: Articles

I turned 37 a couple of months ago, which makes me closer to 40 than I care to think about.  According to my wife, I'm hard to shop for.  However, I think I'm pretty easy since there are only like three things that I'm interested in.  At any rate, I was given the task of buying my own present - a task I readily accepted.  My choice of present?  Carnivac! 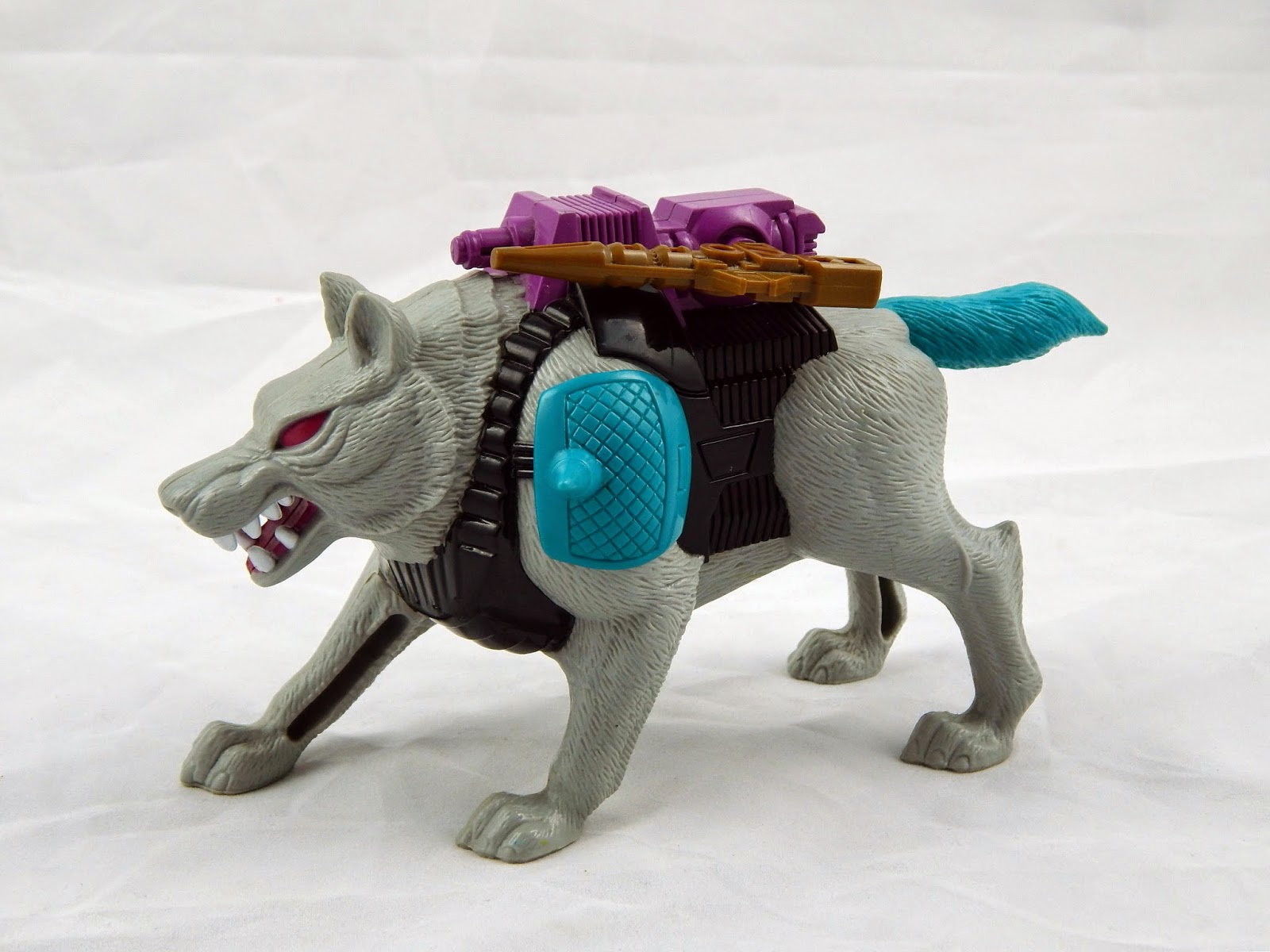 Look, I'm a big fan of Pretenders, and I know that they aren't very popular, but I've loved them since they were first introduced.  The Pretender Beasts were figures that I never got around to as a kid, but I'm working on getting them.  What better place to start than with a sorely needed boost to my Decepticon ranks. 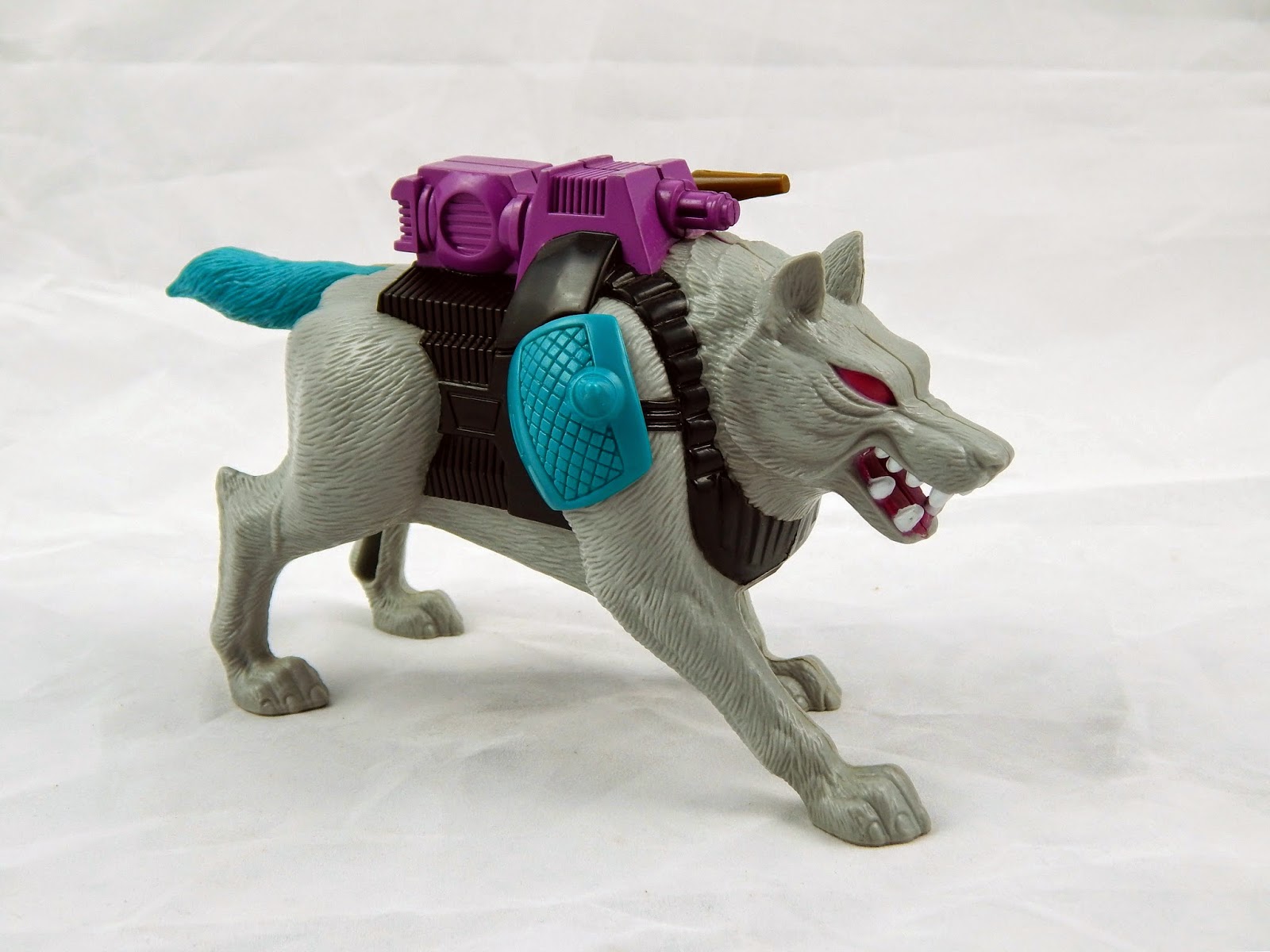 Carnivac's outer shell is a wolf, and he looks pretty vicious.  Just look at those teeth and the spike-filled shoulder pads!  Even without the cannon mounted on his back, I'd give Carivac a wide berth. 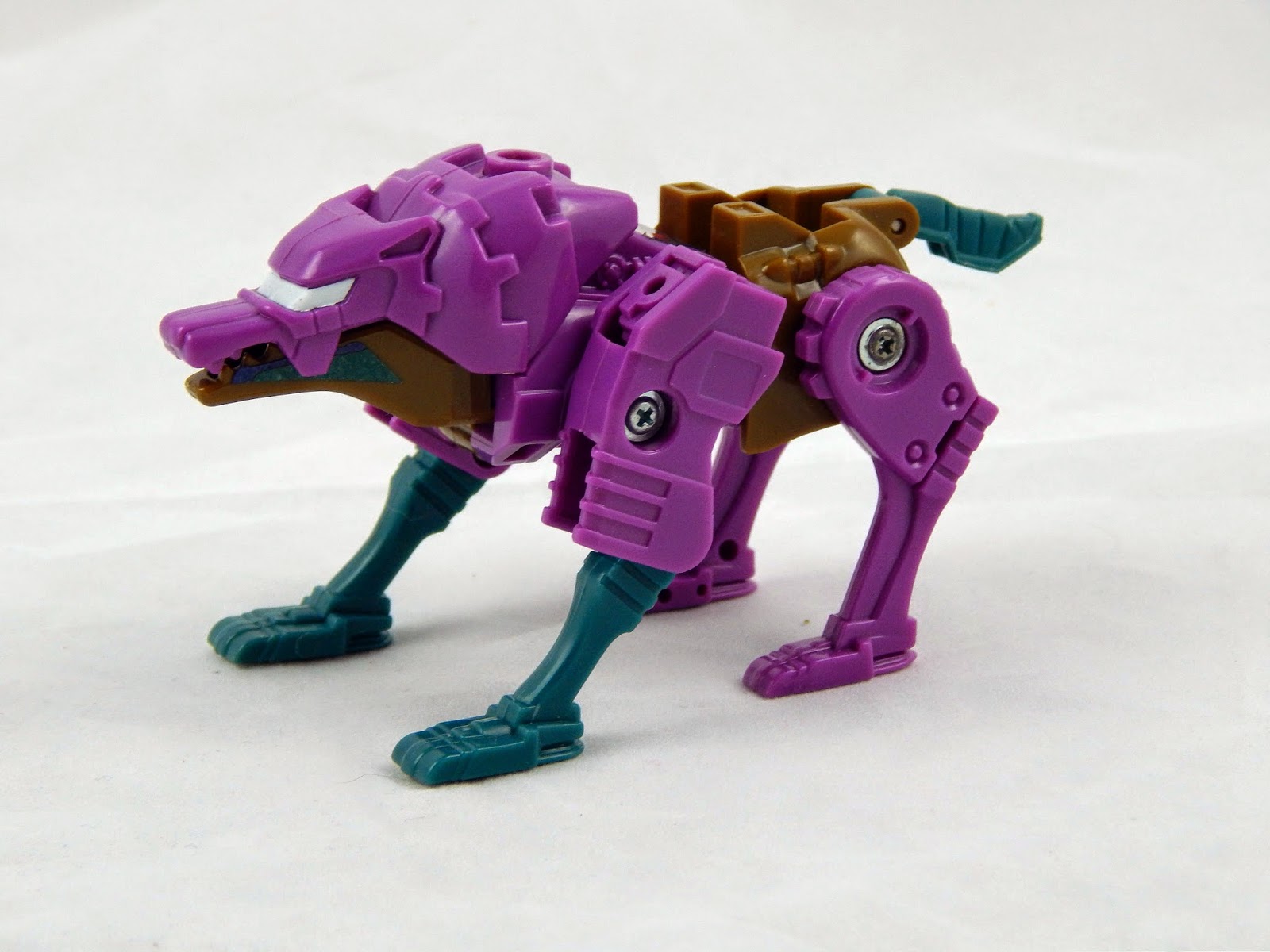 Hiding inside that wolf shell is a robotic wolf, or as people where I live like to say "wulf".  I'm not really sure who decided on Carnivac's color scheme, but I'm not really digging the combination.  Black or grey would have been a nice touch for the body. 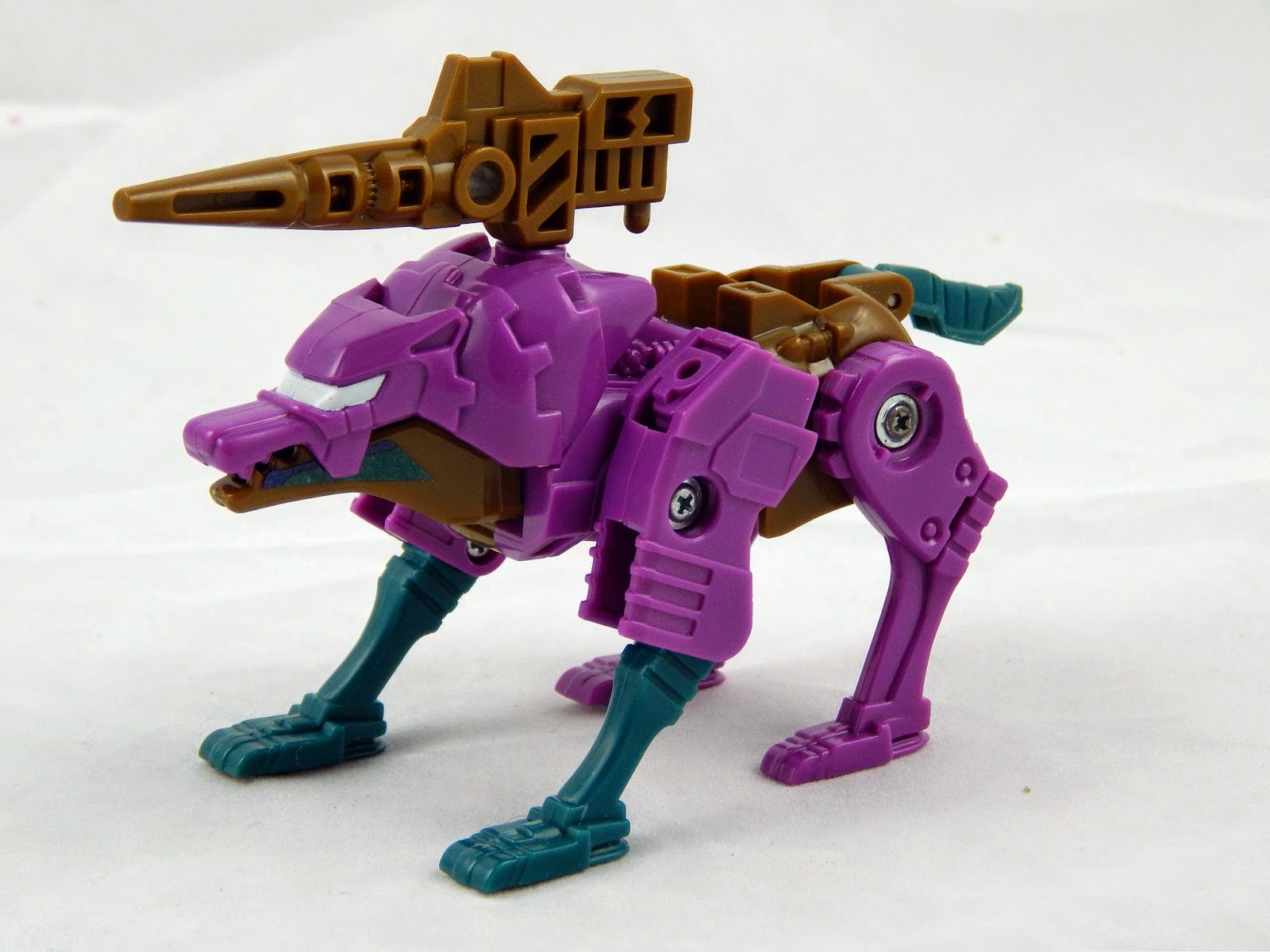 Carnivac's anti-thermal cannon mounts to his back, for an attack mode.  As if running into a giant robotic wolf in the forest wasn't distressing enough, now you have to worry about being blown to smithereens in the process.  This is a look I don't think will ever be used much in my display. 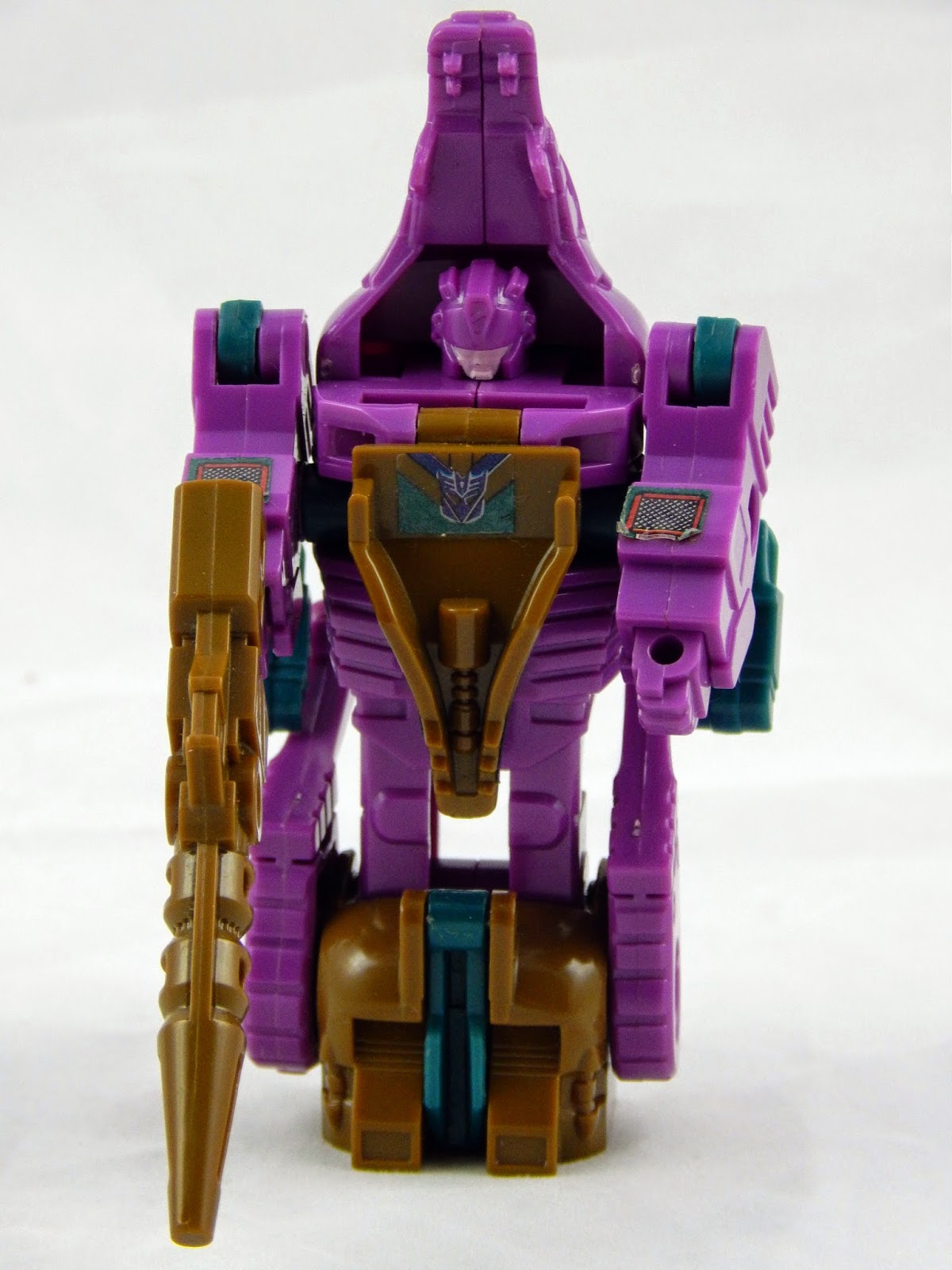 Flip a couple of parts, and we go from wolf to very short robot.  I think that Carnivac's rifle is almost as tall as he is!  Carnivac's look in robot mode is decent, but I kind of wish that something could be done with the wolf snout.  It just adds an odd silhouette. 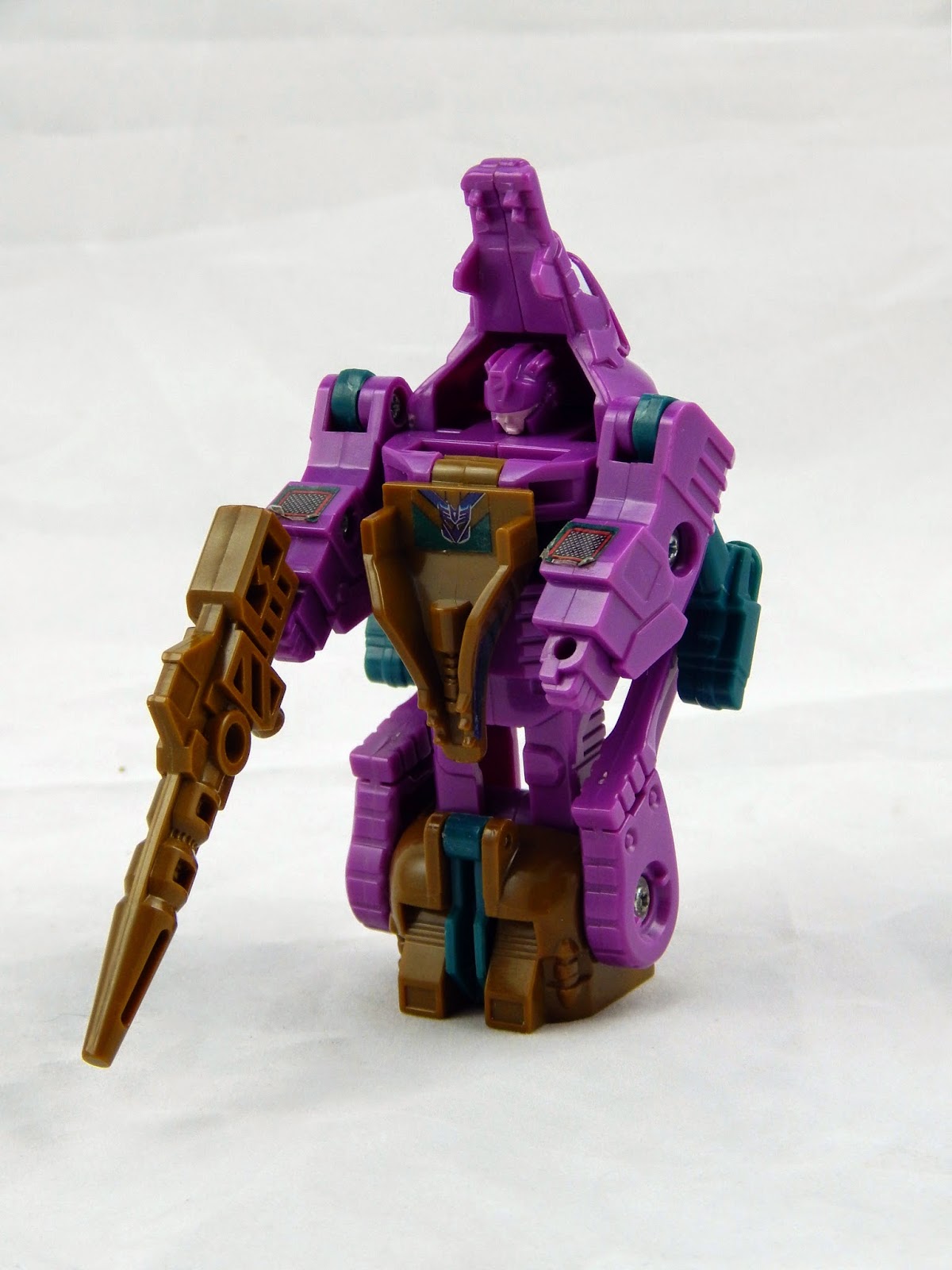 Overall, Carnivac is a fine addition to my display, and a nice addition to my finally growing ranks of Decepticons and Pretenders.  Very nice looking stuff.
Posted by Optimal Omega at 12:00 AM 6 comments: