About a week into the New Year, I received a not-so-little package delivered by UPS from BigBadToyStore.  When I opened the package, this happened:


Yes, that song really went through my head as I held Magnus in my hands for the first time.  Although, to be fair, I hadn't actually opened him yet.  When I finally did a couple of days later, I was still very impressed with him. 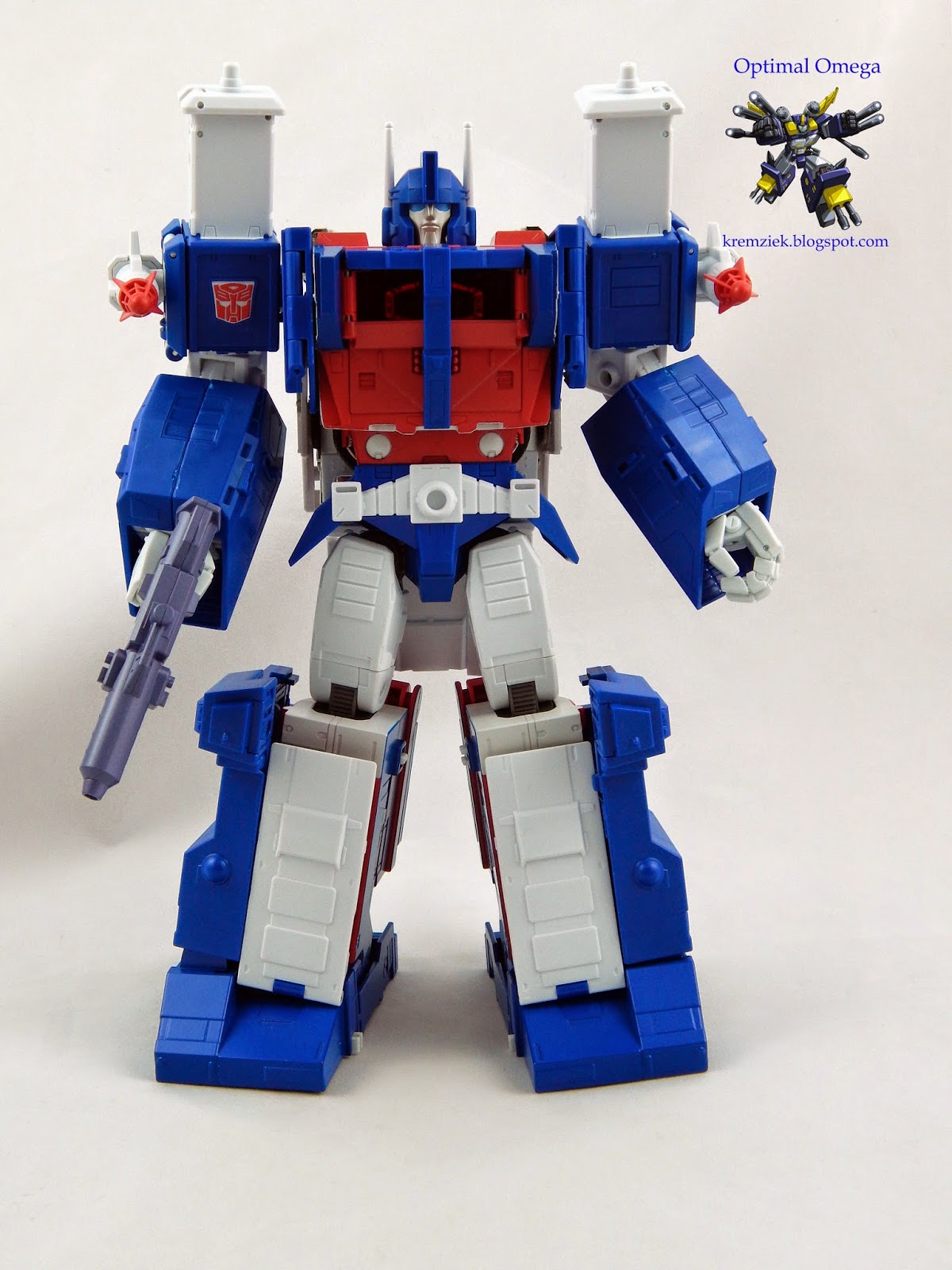 The first thing that caught my attention was just how heavy Ultra Magnus is.  He seems to weigh more than MP-01 Prime.  That's due to the die-cast in Ultra Magnus' massive, massive feet.  I think if he were to wear shoes, he'd be a 13EEEEE. 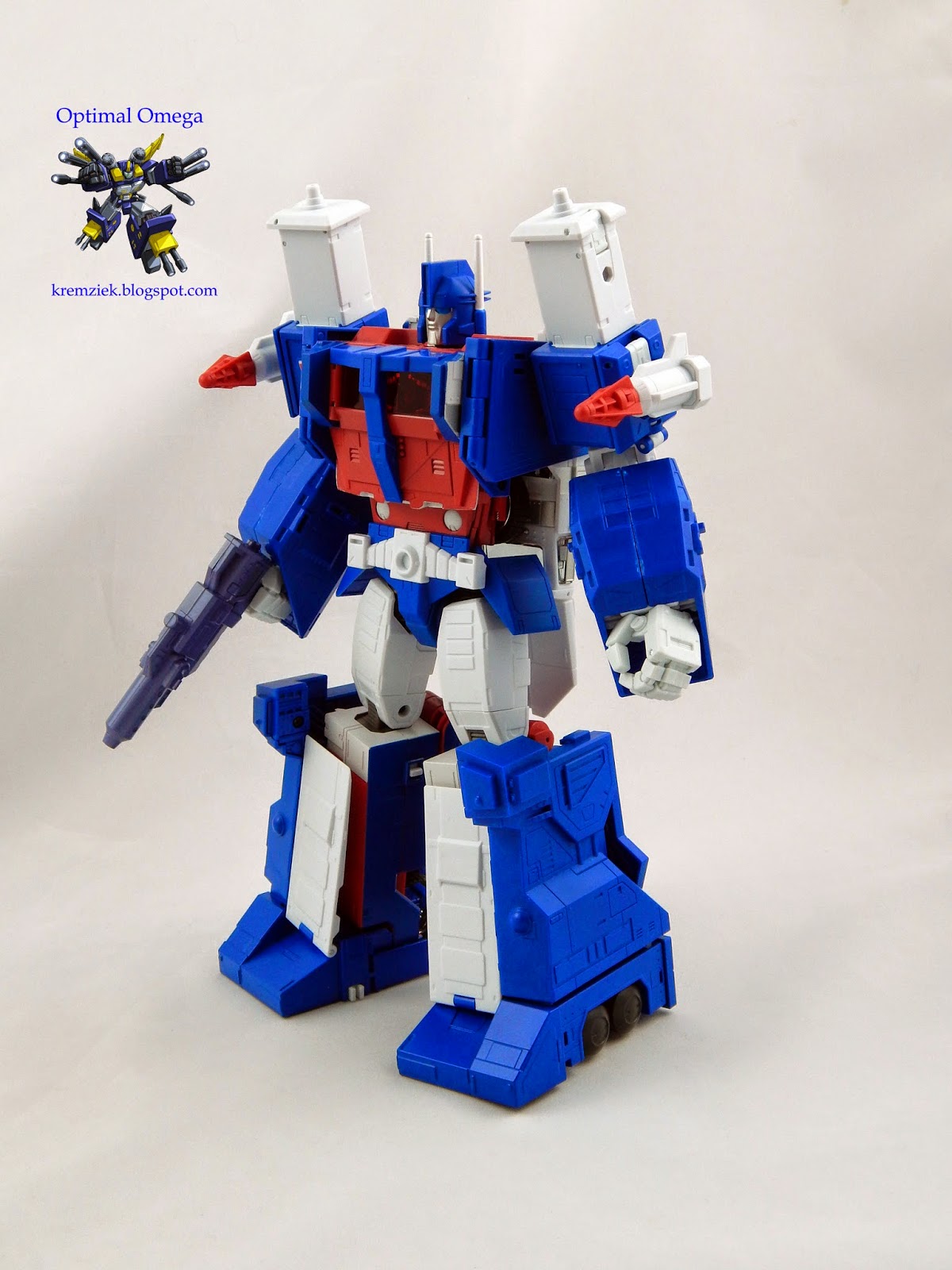 Ultra Magnus is fashioned after his animation model, and the attention to detail is spectacular.  The small wheels on the feet are something that I really enjoy.  Still, if you want to copy the toy version a bit more, you can flip those wheels to reveal the vehicle mode tires. 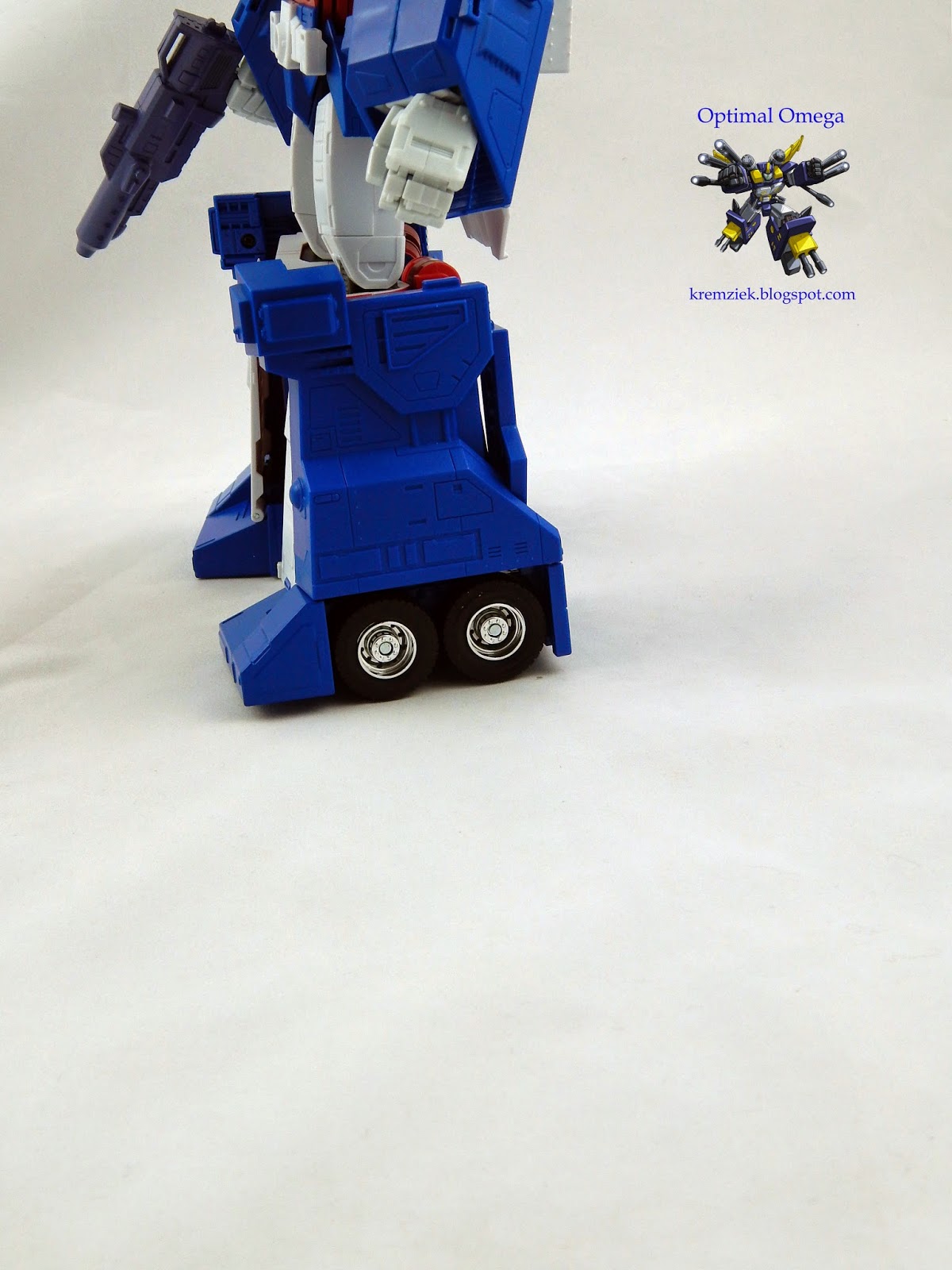 Instead of just being an Optimus Prime that's plugged into a trailer, Ultra Magnus is his own mold, as evidenced when you turn him around. 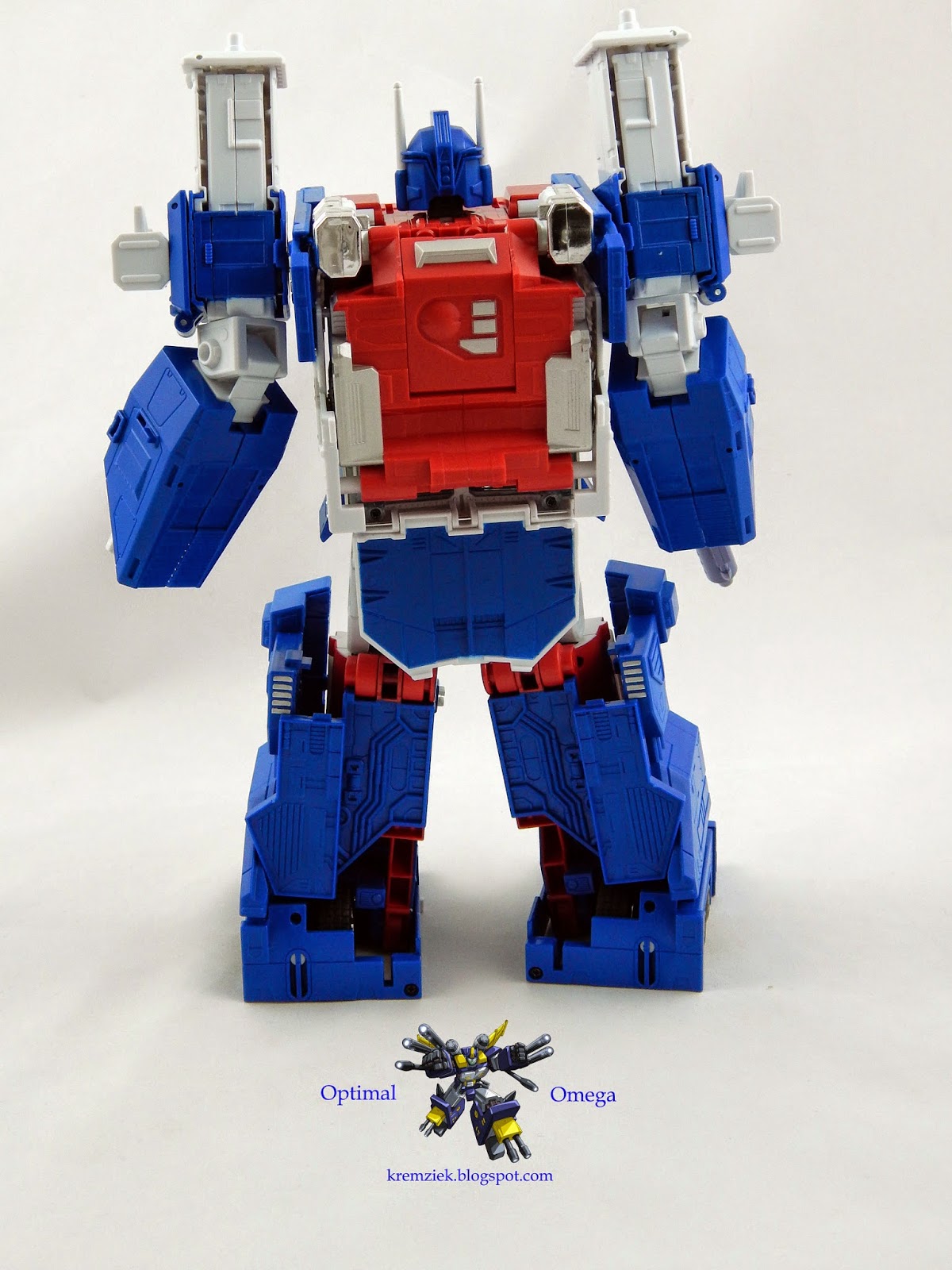 I don't see an Optimus Prime plugged into a suit, do you?  Due to all of this awesomeness and rejiggering of the MP-10 mold, waist articulation is nonexistent.  Articulation is limited to his head, shoulders, elbows, thighs, knees, feet, and fists.  Poor us, suffering with such limited articulation. 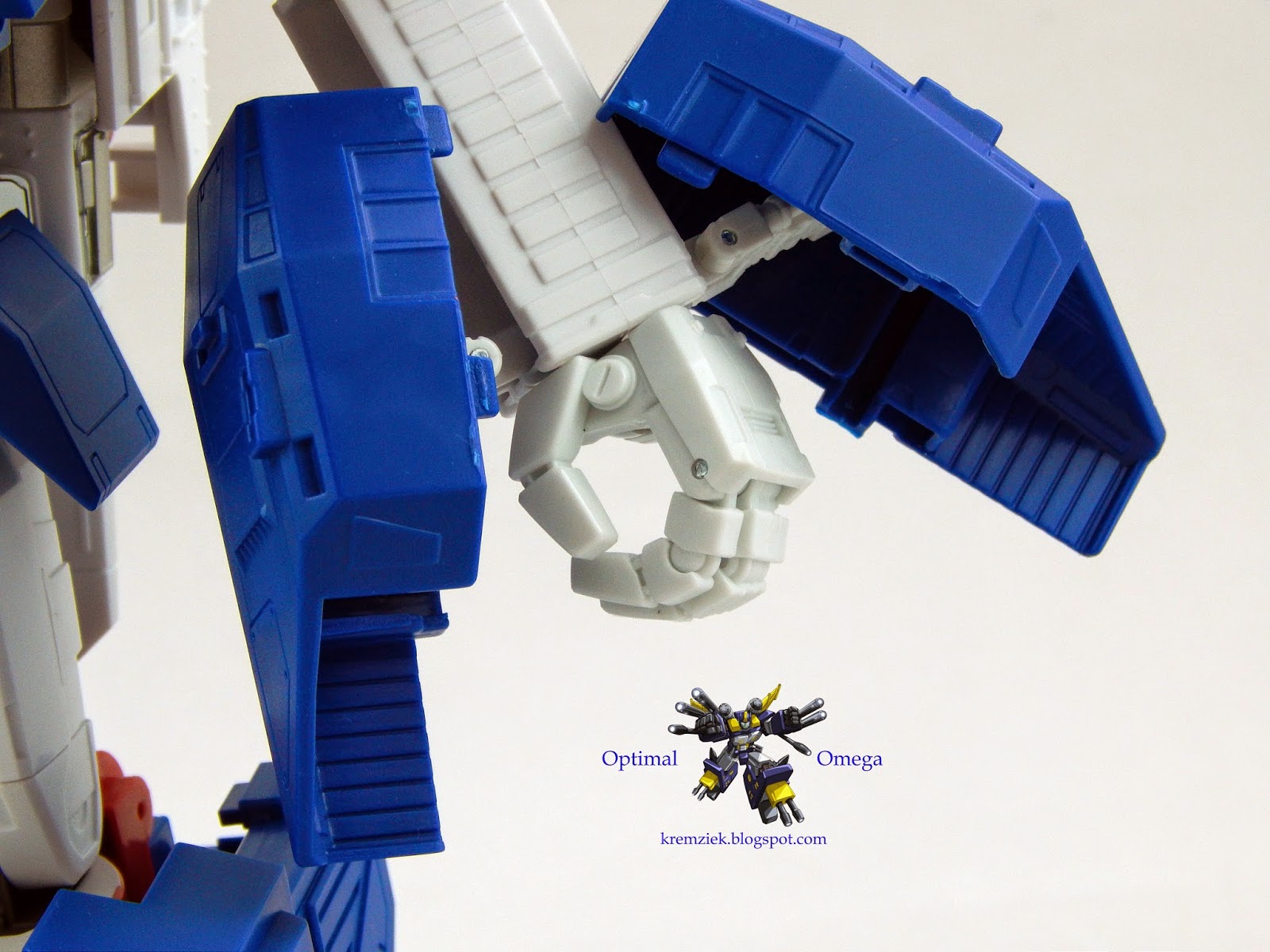 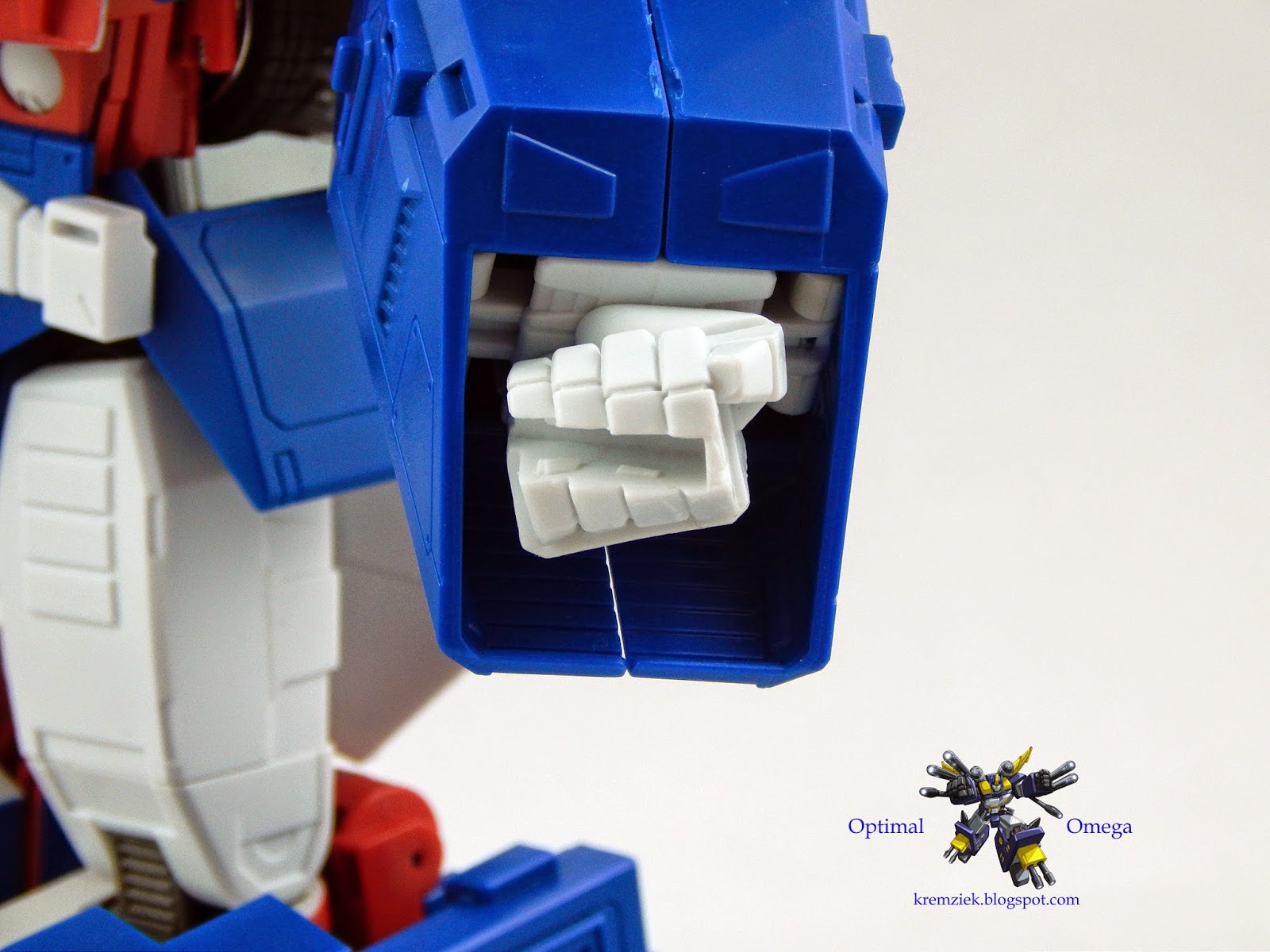 The fists are closed, and feature a slot that one end of the Matrix can fit in.  I'm not really a fan of that pose, so I didn't take any pictures of it.  I'm sure that a shot of this can be easily found on the Internet, if you really want to see one. 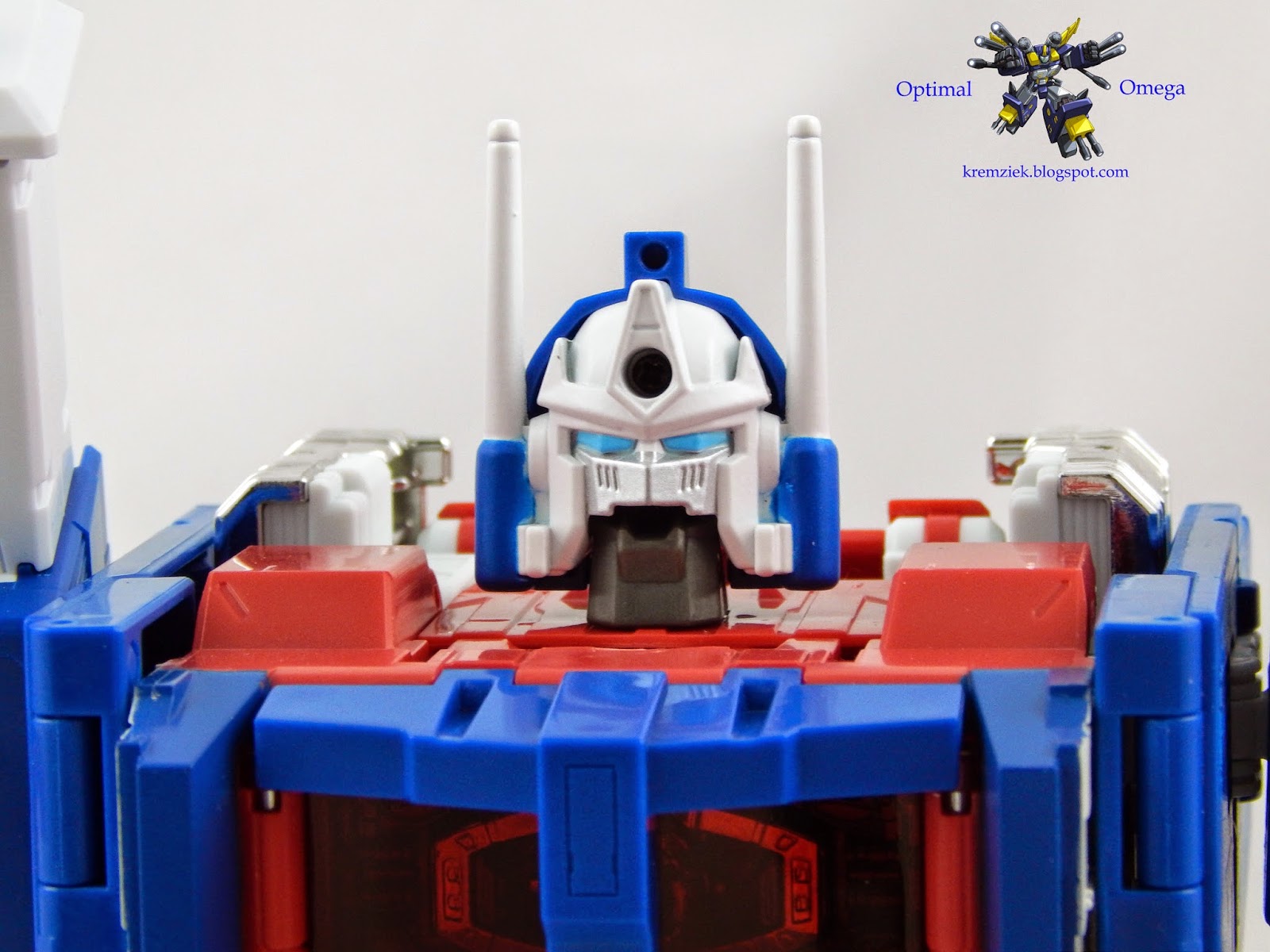 If you pop off Magnus' face, you can see a nice little homage to the G1 Magnus.  Also, you can replace the stoic face with an "O Face".
This is the face one would use when utilizing the Matrix fists.  When not using one of the faces, they can store conveniently in his back. 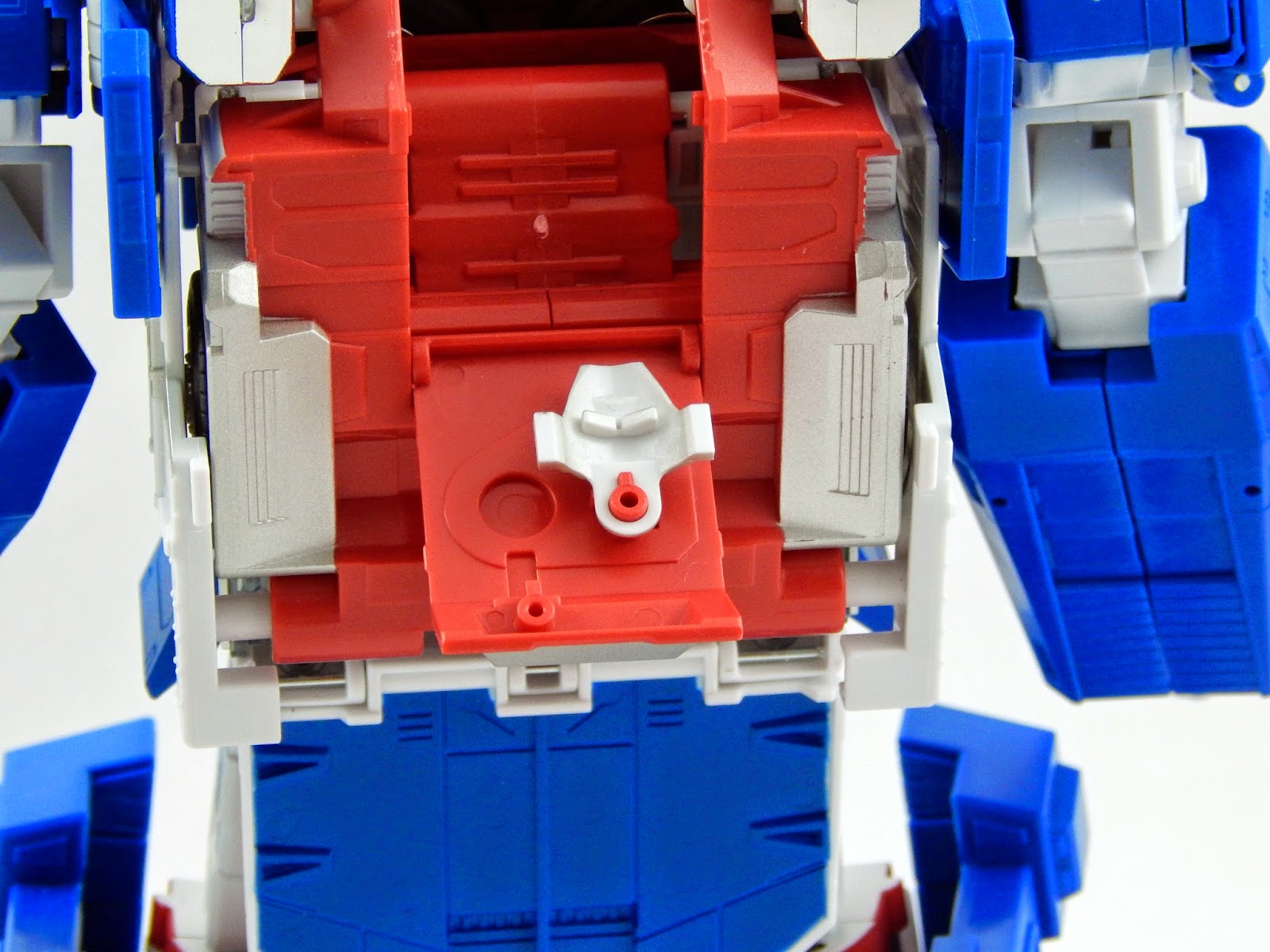 Both faces can store here, but I'm not really why both faces would be stored at the same time.  Will Takara release a "I can't deal with this right now!" face? 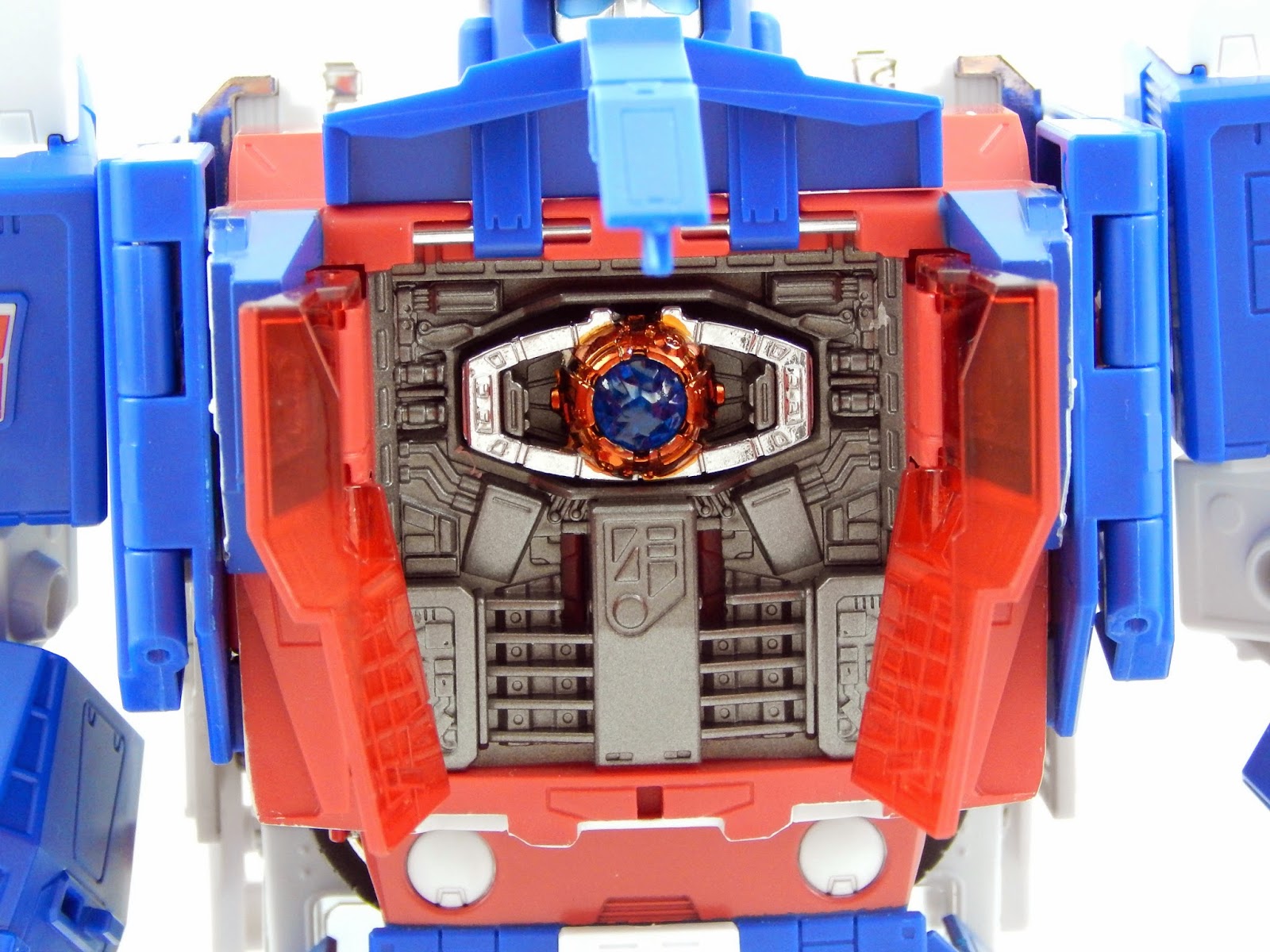 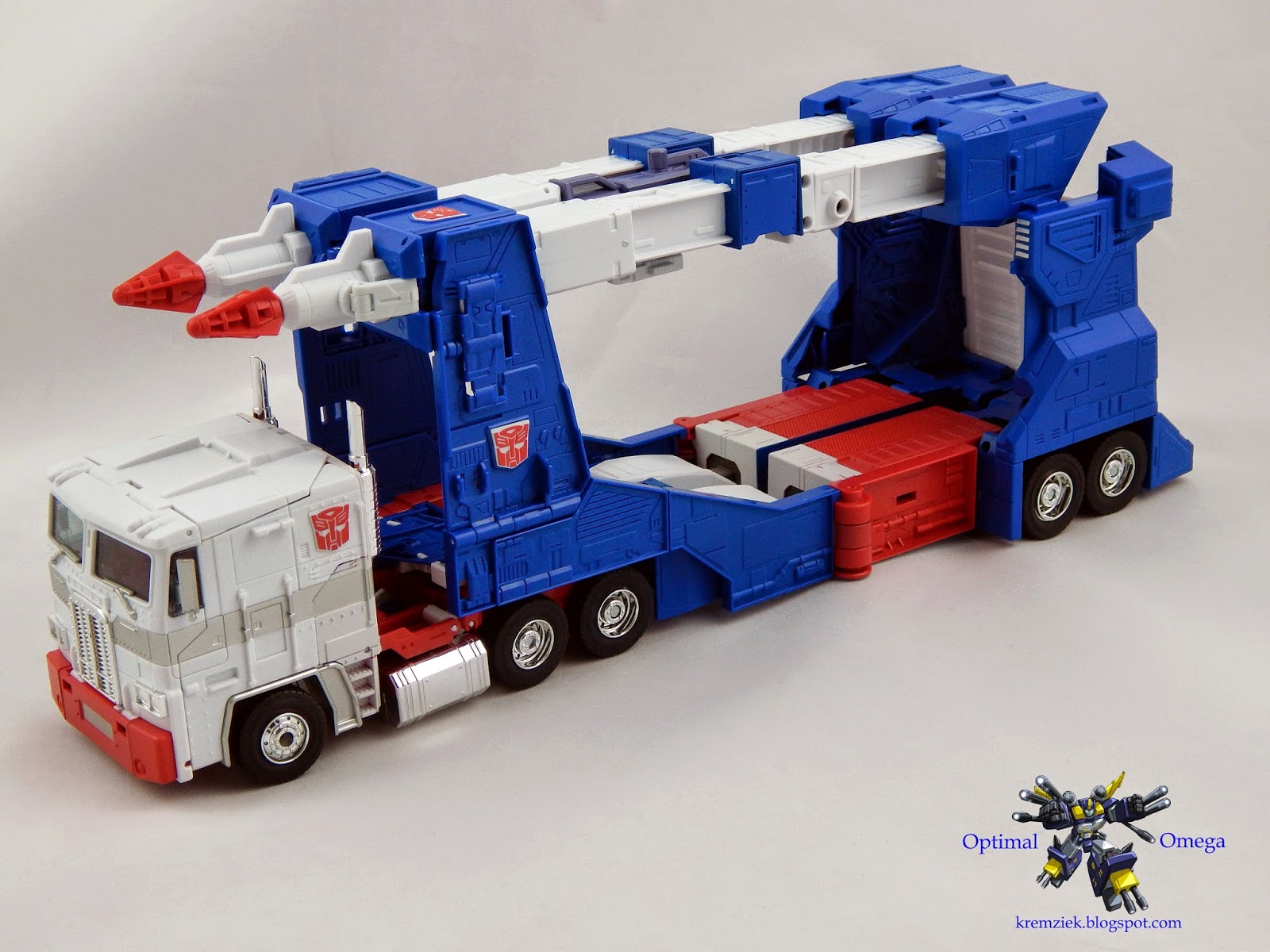 Transformation into car carrier mode is surprisingly easy and intuitive.  I was expecting something a little harder than what we wound up with.  Seeing various pictures online before Ultra Magnus was released led to me to believe that this would a difficult task.  Once transformed, we get a look that resembles his G1 incarnation, with the missile launchers one the front of the rig.  The launchers are not detachable, but instead are attached to swivels that can move, which allows for another look. 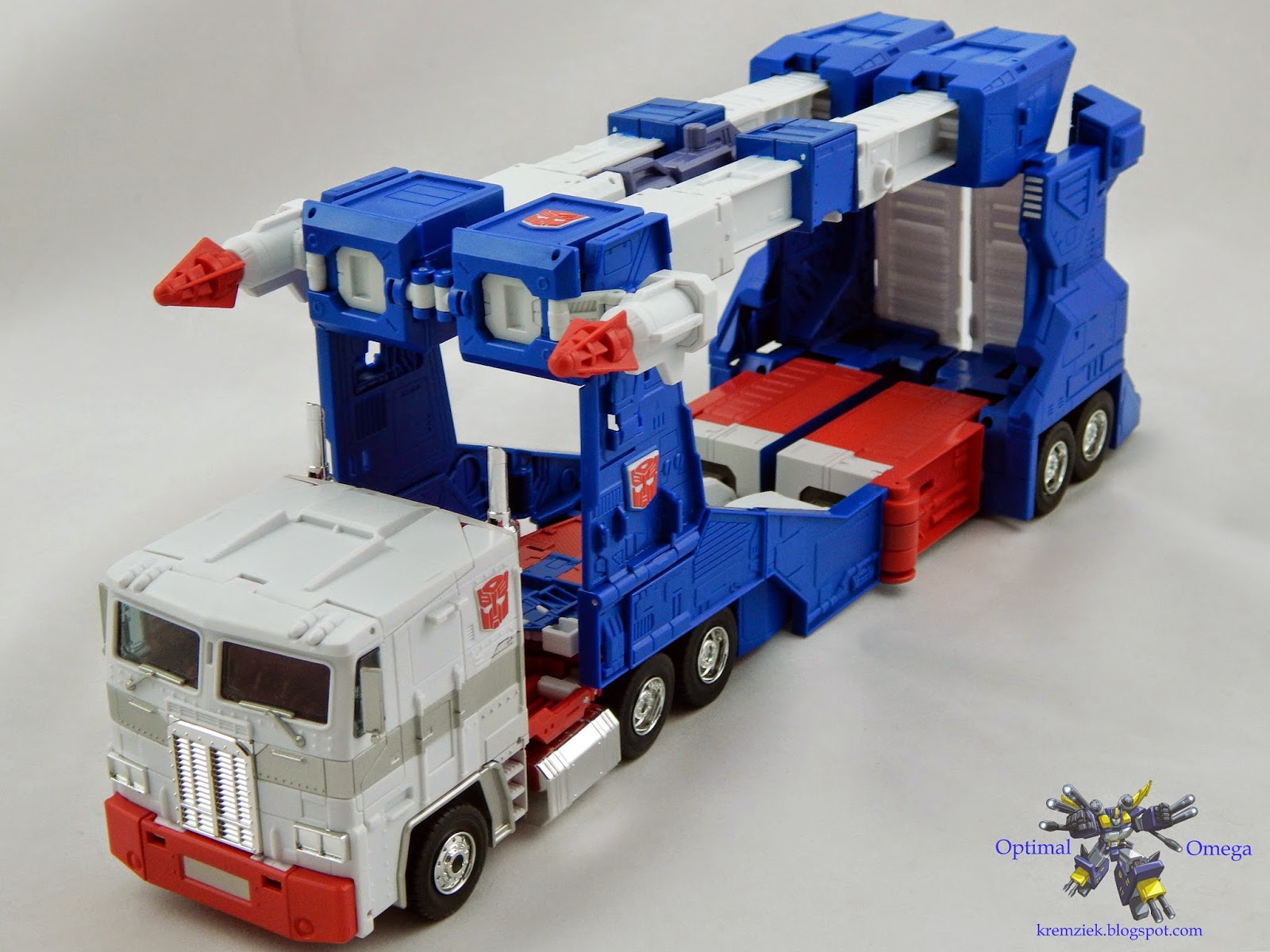 The cab detaches, which is something that I really didn't anticipate. 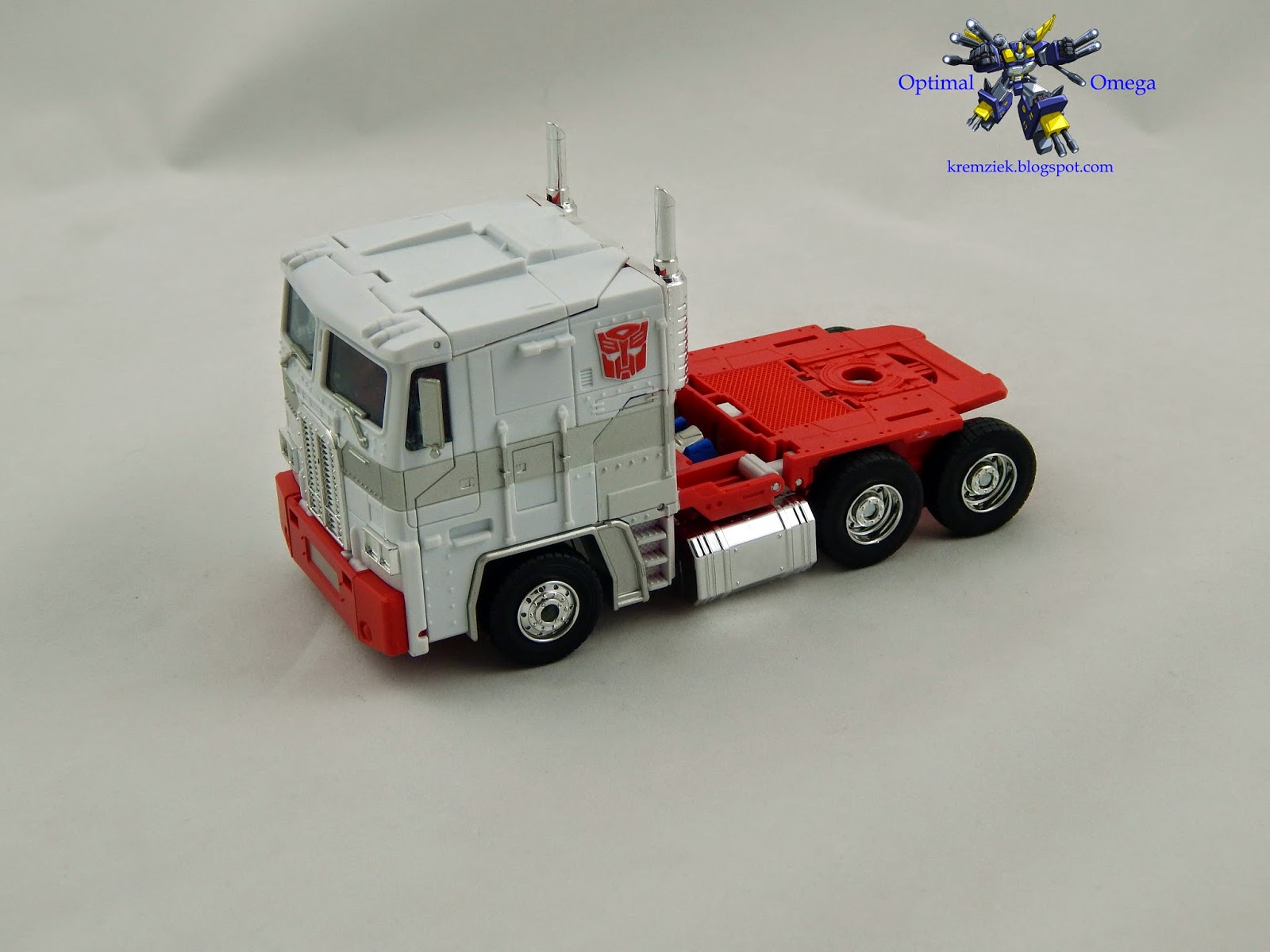 Unlike MP-10, Magnus' cab is hollow.  Most of the cab just breaks apart to form his back side and head. 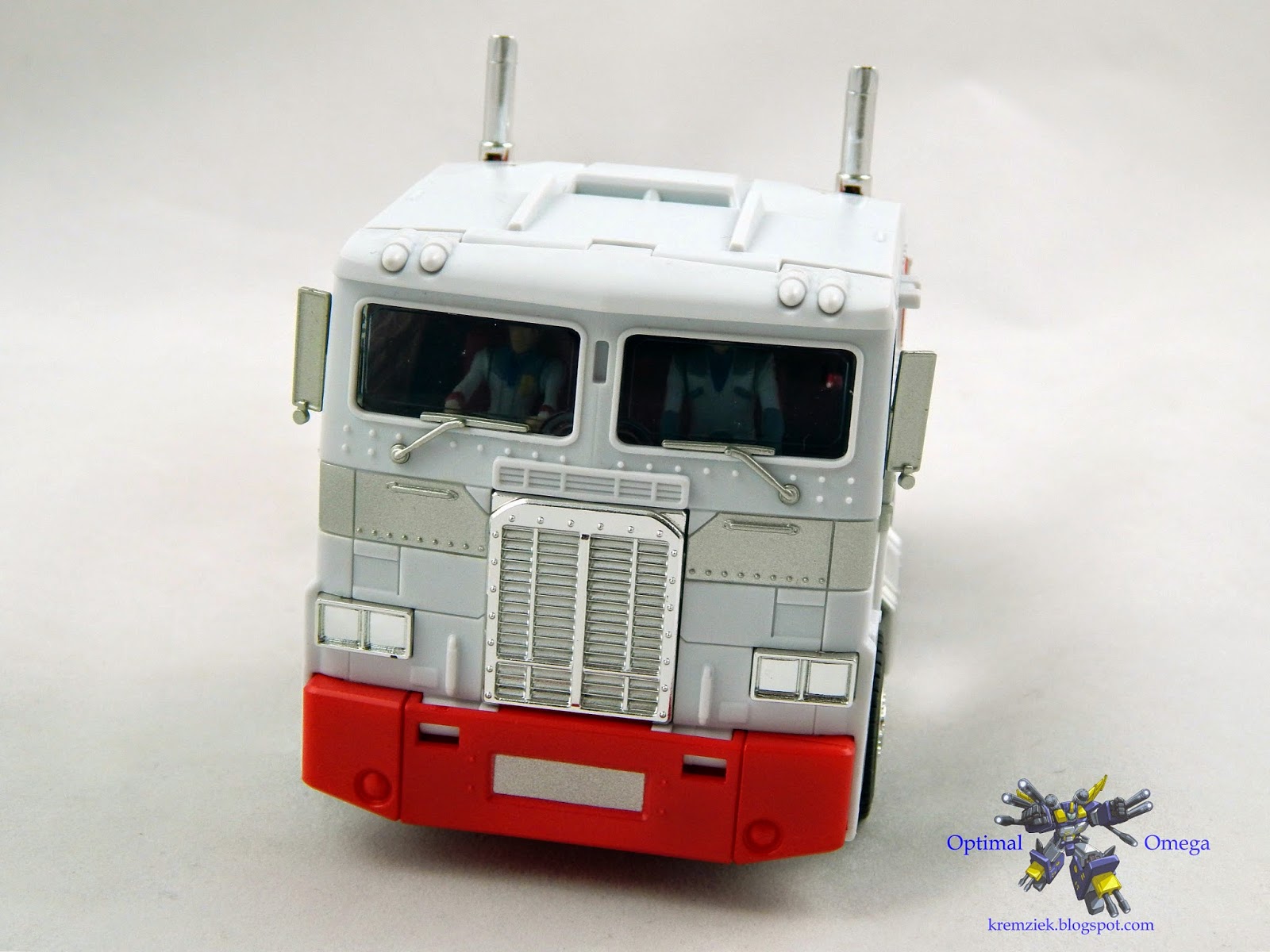 The red bumper is a bit jarring to look at as I was really expecting a silver one.  I'm sure that there's a story there, but I'm not sure what it could be.  Hmm...what's that in Ultra Magnus' windows? 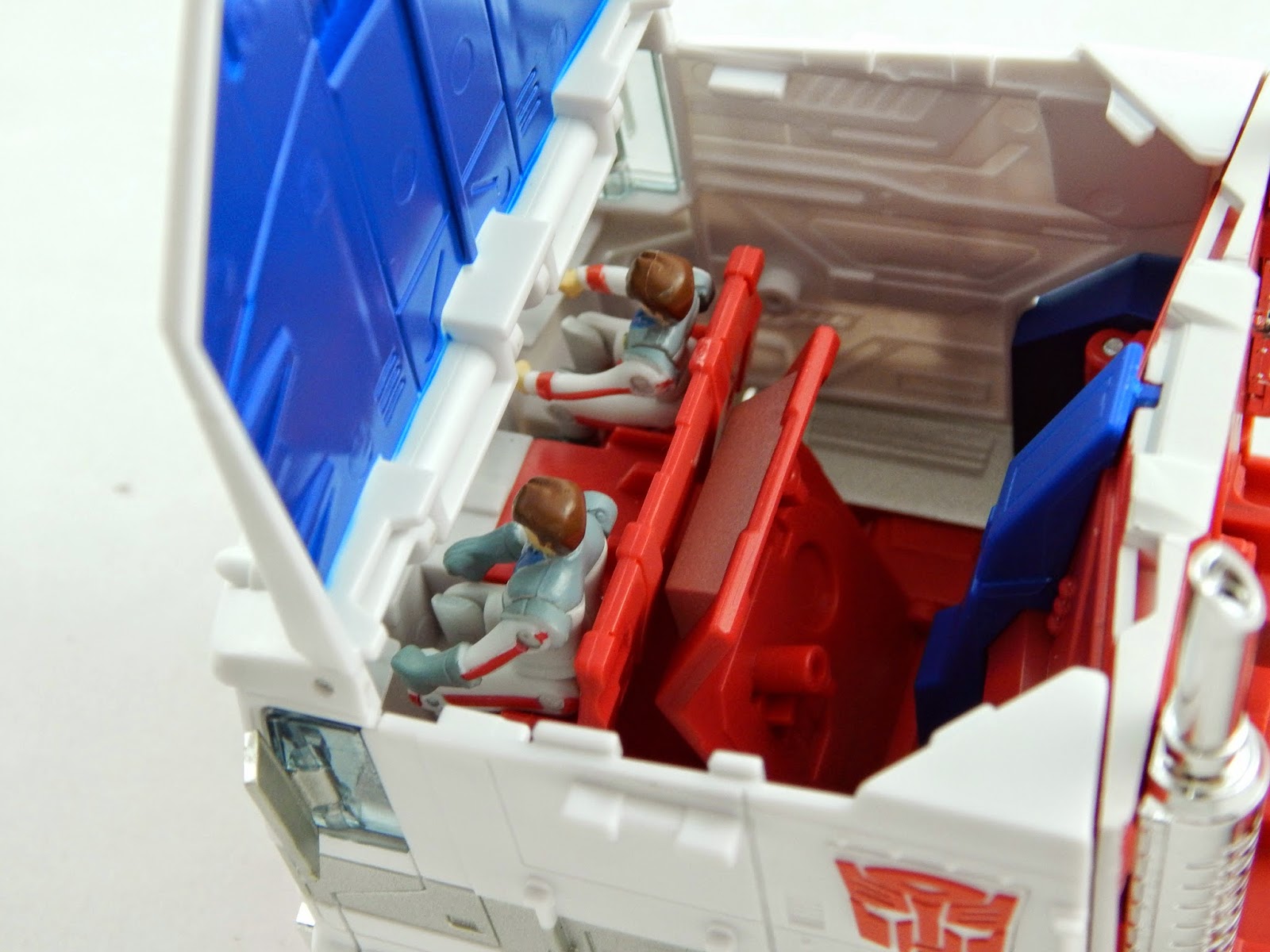 Why it's 2005 Spike and Daniel!  What's a truck without a driver?  Let's take a closer look at them. 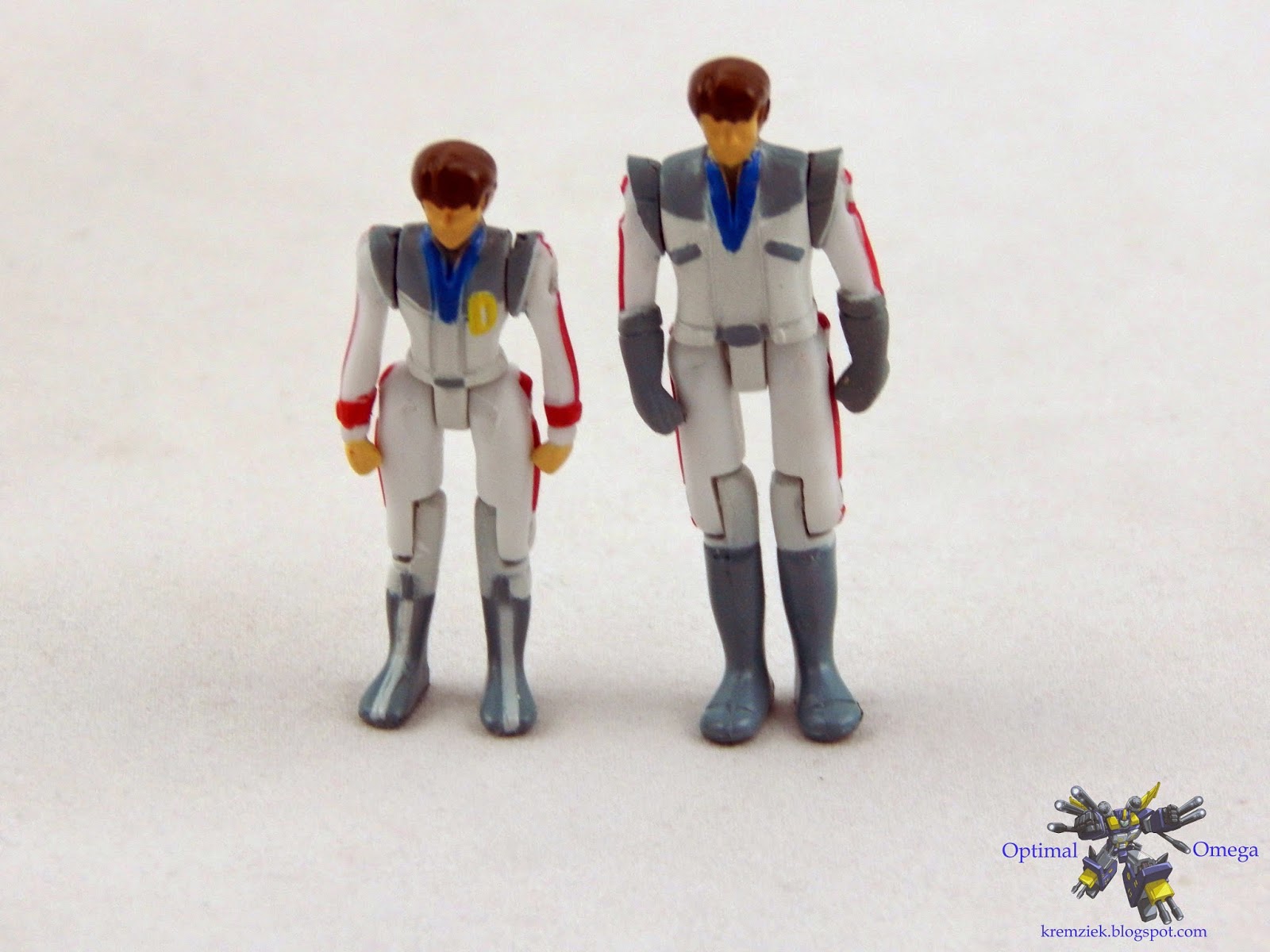 I absolutely love the fact that Hasbro, or Takara, or whoever designed the humans for the movie, decided that this is what we would look like in 2005.  Apparently Takara also decided that humans don't have facial features.  Daniel has what I've been told are birthing hips.  All jokes aside, I'm very happy that we've been getting humans with larger Masterpiece figures.  This marks the third instance of Spike, and the first appearance of Daniel.  Well, I suppose it depends on how you look at it.  I'm still holding that the Exo-suit that came with Bumblebee is Daniel and not Spike. 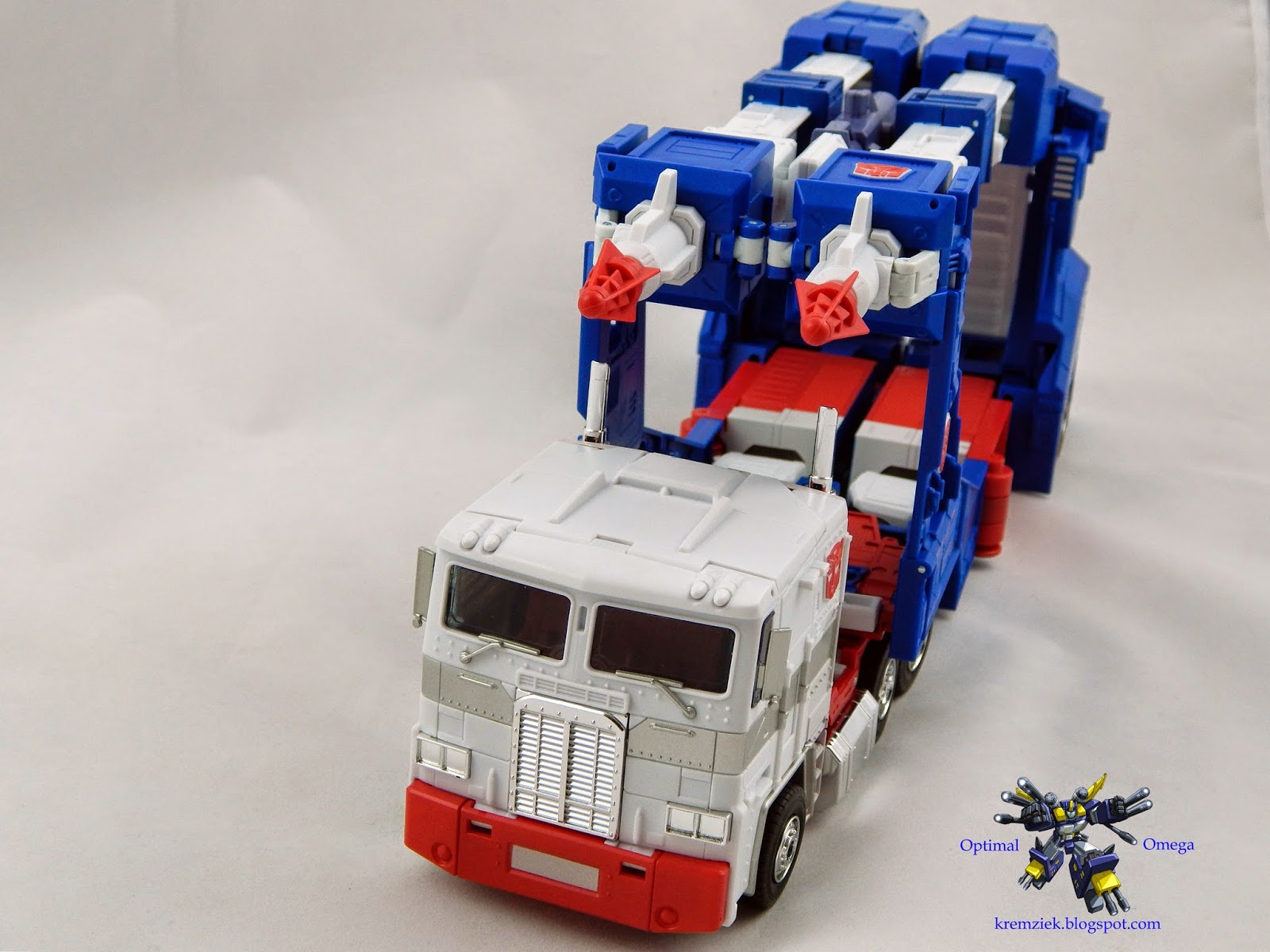 Ultra Mangus may not feature the points of articulation that we've grown accustomed to with recent releases, but he more than makes up for it in features and accessories.  The thought process and ingenuity that went into creating him is mind boggling and the designer definitely deserves some sort of award and plenty of recognition.  A figure that I've been anticipating for the better part of a year is finally a reality, and I couldn't be happier.  Now to wait on a Powered Convoy redeco that will most likely never happen thanks to Tomy's aversion to Diaclone repaints.  And Star Saber.  Bring on Star Saber already!
Posted by Optimal Omega at 12:00 AM 2 comments:

This guy was a long, long time coming.  My search for Downshift has taken me quite a while because finding one that that wasn't yellowed or still bagged.  A bagged specimen would've been fine, but the prices I saw were almost too high to justify since he was going to be opened anyway.  After a bit, I finally found the Downshift for me. 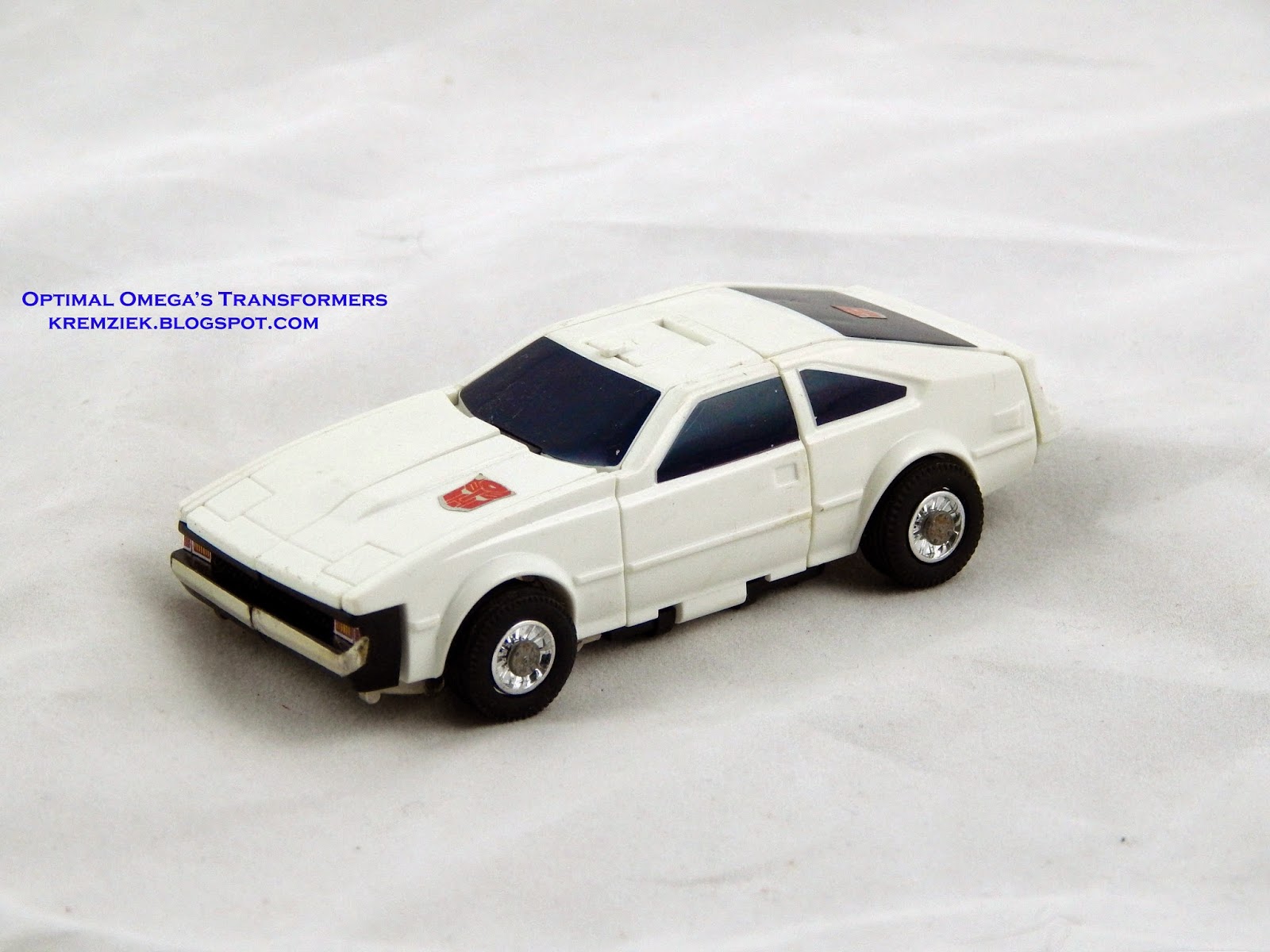 My particular specimen of Downshift isn't perfectly white, but he's pretty close.  His wheels aren't cracked, and overall, he's in great shape.  His stickers are a little haphazardly applied, but that's a quick fix with some Reprolabels.  Well, it would be, but... 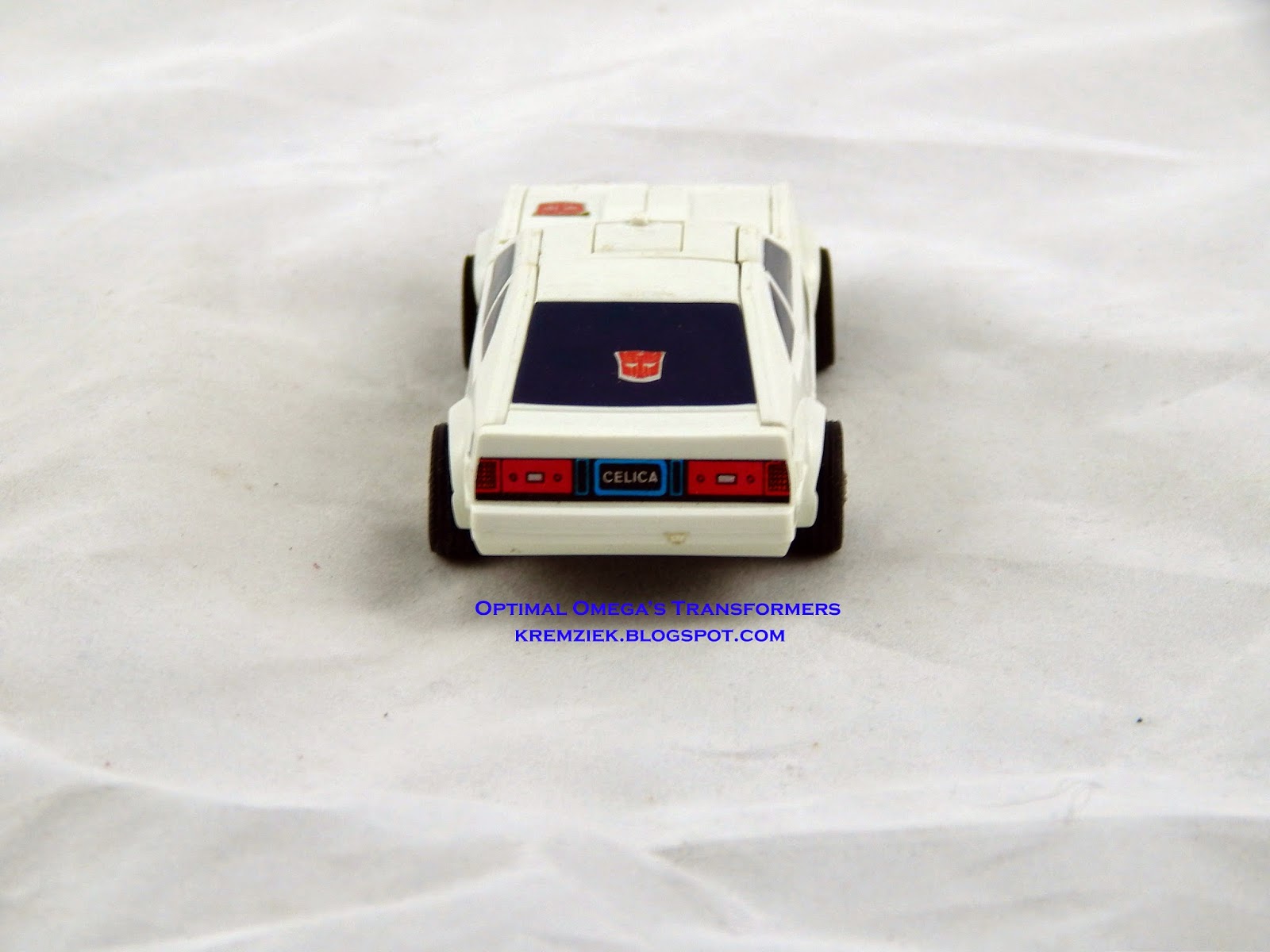 I evidently purchased one of the earlier versions of Downshift with the "Celica" license plate decal.  The repro set that I got comes with the blank license plate.  Since I take the opportunity to completely scrub (professionally clean?) my figures when I replace the decals, I think I'll just stick with the decals as they are. 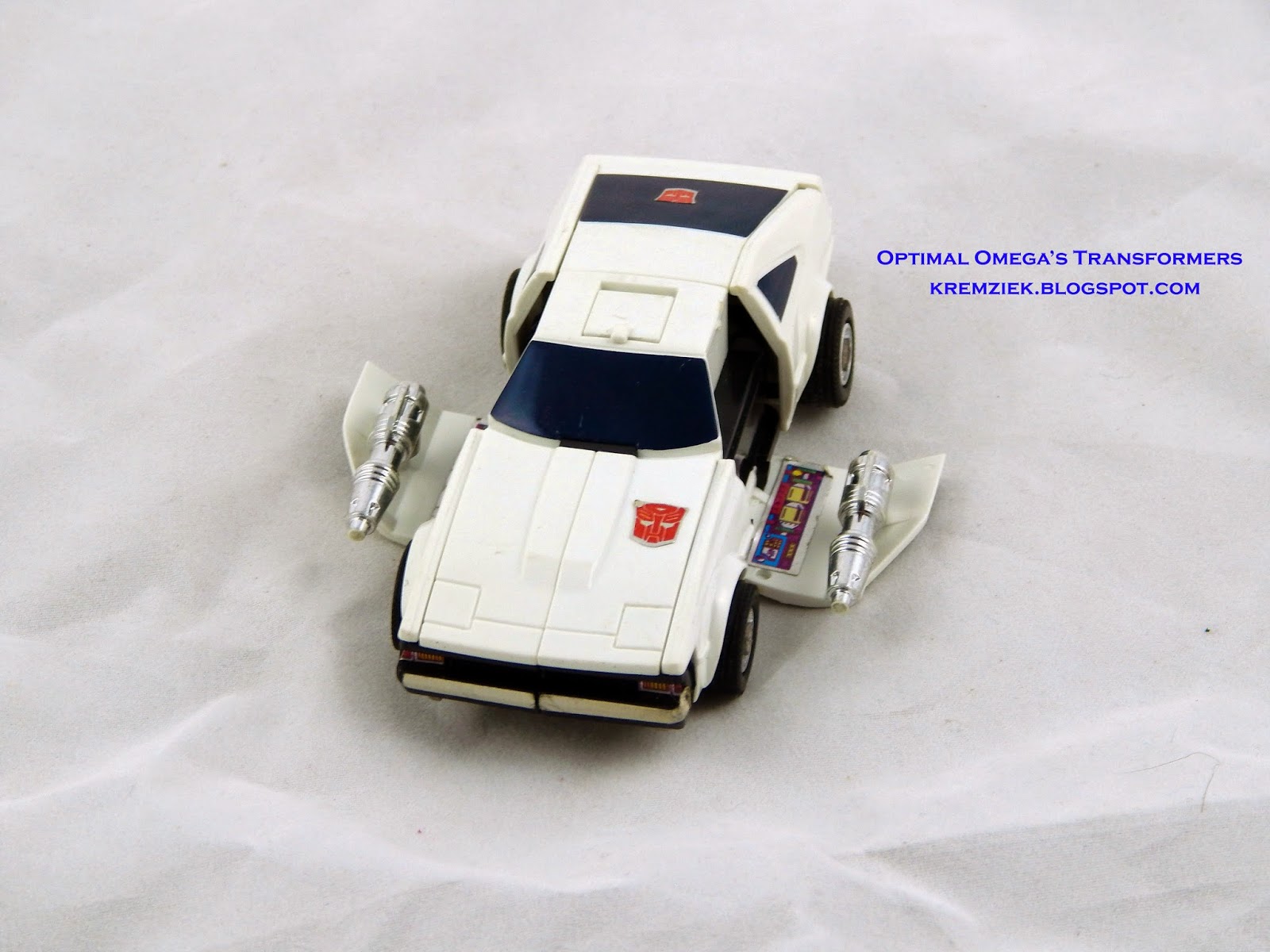 Like all of the Omnibots, Downshift features a third mode.  Downshift's happens to be flying car, like Overdrive.  It's not a very convincing flying mode, but it's a third mode. 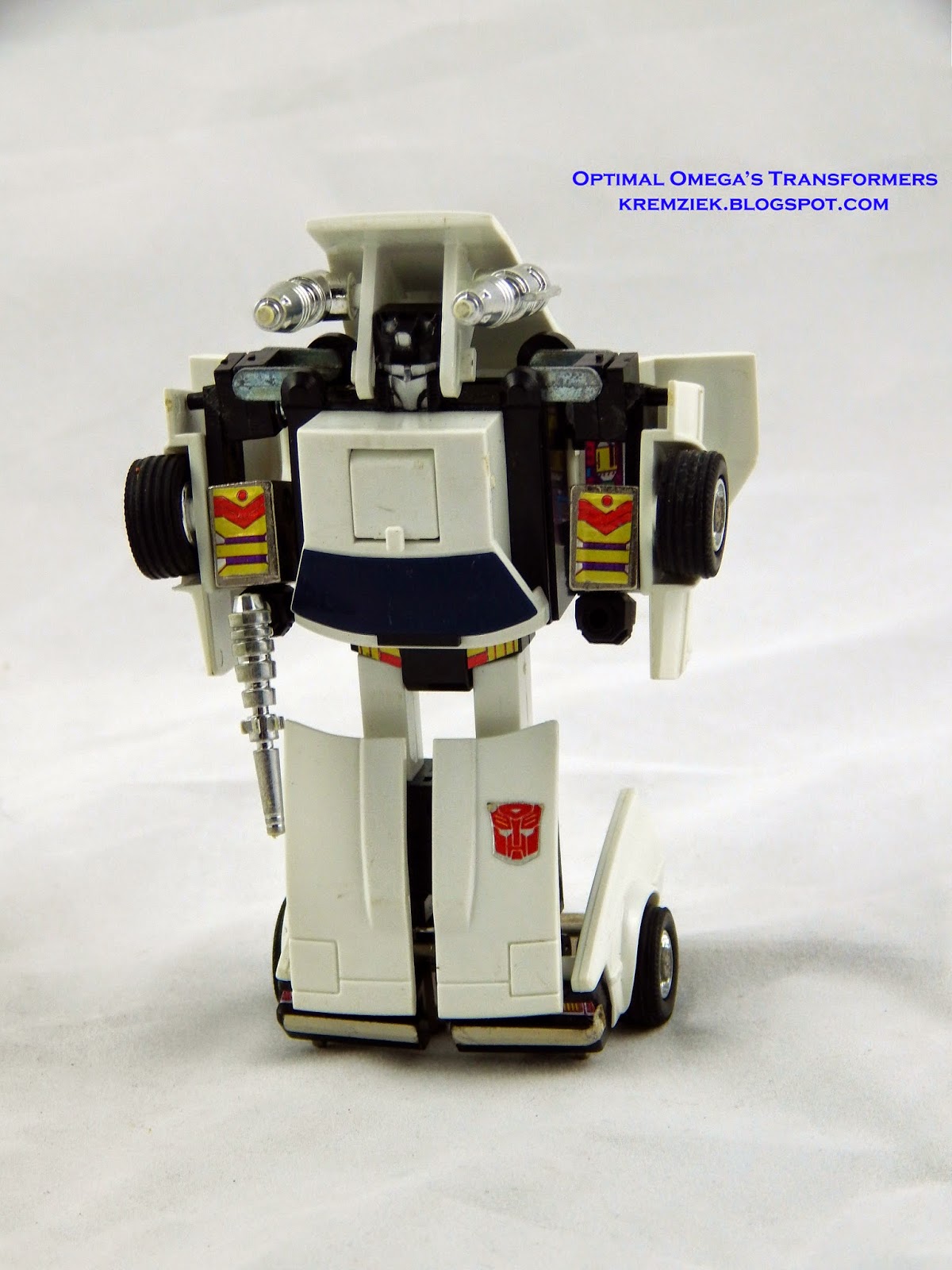 Of all the Omnibots, Downshift is my favorite.  His robot mode his highly reminiscent of Wheeljack, in my opinion.  Their transformation schemes are similar and they share the same basic shape.  He's pretty short, however.  Then again, all of the Omnibots are short.  I always wondered why the Omnibots were never released at retail, and now I have my answer: oh so short. 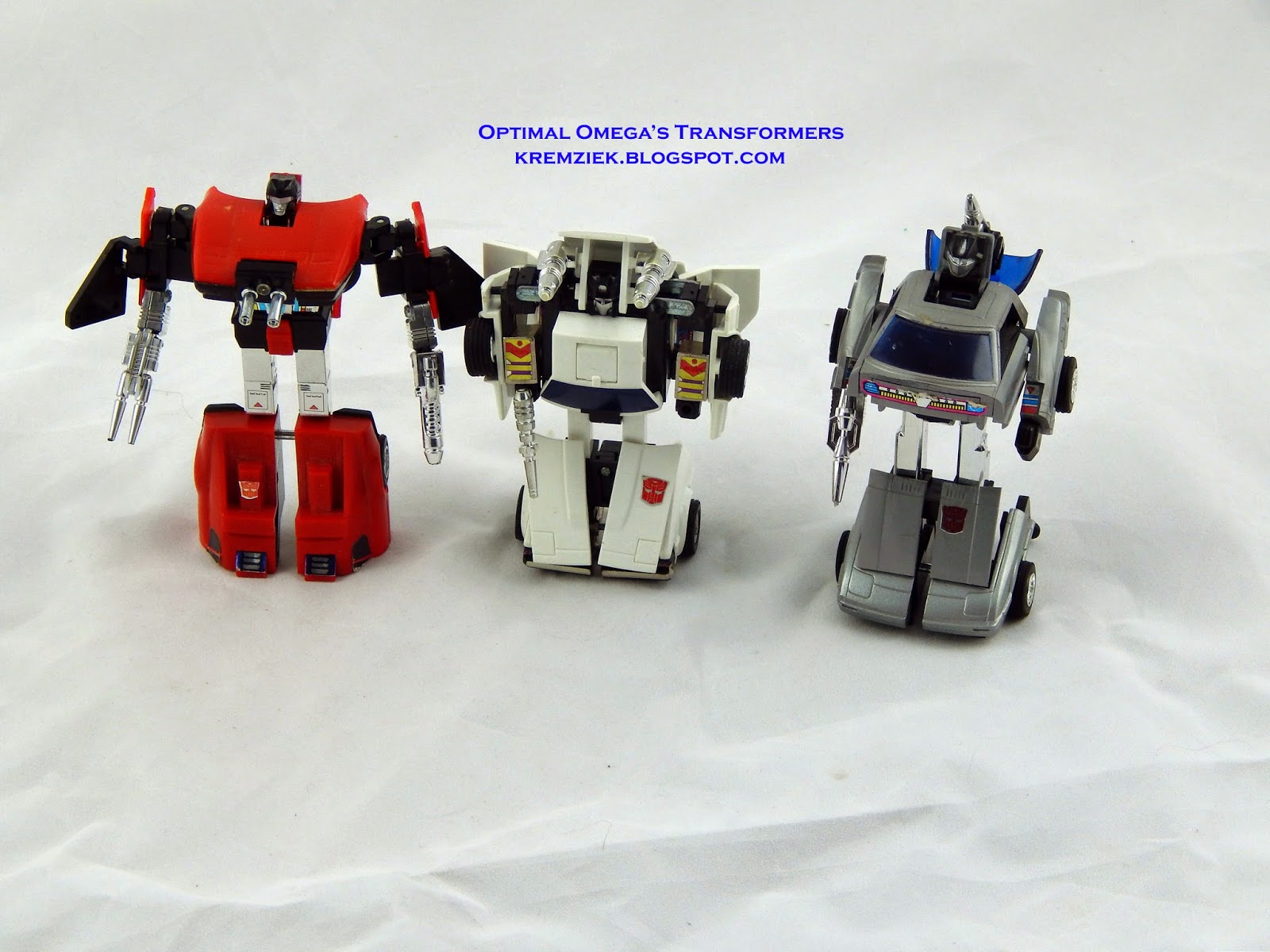 Here's a shot that I've wanted to take for ages.  Looking at this picture, that I took over a month ago, I can't help but be amused by how short Downshift is.  He might as well be a Minibot.  One more subgroup and 1985 figure down.  So close to finishing off the year...

Man, 2014 went by way too slowly.  On a personal level, I'm very glad that it's over.  Just too much going on - new kid, lots of illness in the last quarter of the year, running out of room, and just not enough time to devote to all of it.  But I'm not here to gripe about the personal; that's for another day and maybe another blog.  I'm here to talk about my year in Transformers.  Well, that was a bit rocky as well.

The year started out well enough, with the addition of Masterpiece Smokescreen.  Not a lot of people like him as is, what with all of the modifications I've seen, but I really liked him.
Things continued to get better when I found a nice listing on Craigslist and wound up with Hardhead, Gnaw, Horri-Bull, and Spinister for practically free once I sold off the rest of the lot.  Nice work, I must say.
This has been a great year, what with my pursuit of the 1985 figures, even though I never finished them.  That means loose ends to tie up.  I definitely will not be trying to complete a year of figures again.  Maybe.

Something that I'm very proud of are the relationships that I've managed to build in the community over the past year.  I've had conversations with Duocon Flywheels, Brr-Icy, and The Gassy Autobot on Facebook, and I've come away better informed and entertained from them.  I look forward to having more conversations with fellow collectors over the next year.

Okay, now on to some favorites of the year. 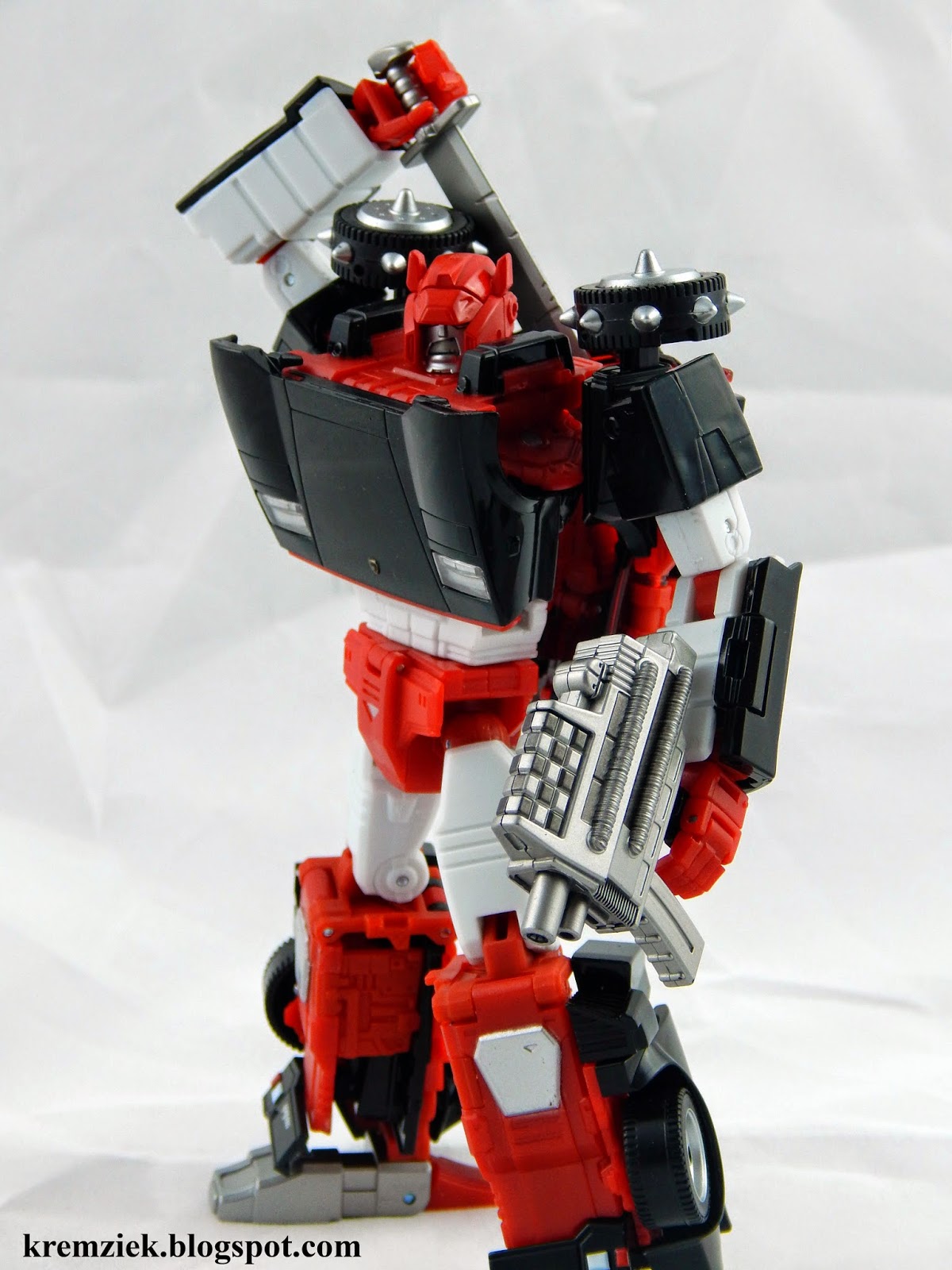 Were there more aesthetically pleasing looking Masterpiece figures released this year?  Sure, Wheeljack, Silverstreak, and Soundblaster come to mind, but they weren't as out of left field as Generation 2 Sideswipe.  Just look at how 1990's this guy is. Read my review at the link above.

This was a tough one for me to decide on.  Every year, I constantly say that I'm done with the line as I need to focus on G1.  Every year, I'm constantly buying new Generations product as Hasbro and Takara do such an amazing job designing these guys that it's hard to pass up any figure.  Having said that, I think that I'm going to go with a more recent release as opposed to one from earlier in the year, which means that I'm going with the great Brainstorm figure.


Favorite Generation One Purchase of 2014

I got a lot of great figures in 2014, especially with respect to the G1 line.  There were the aforementioned Craigslist purchases, the Monstercons, and many more.  When I think about it, however, my favorite purchase would have to be Reflector.  He's a figure that I had never held in my hands as a kid, and finally getting one felt like I had won some sort of award or something.  Great pickup. 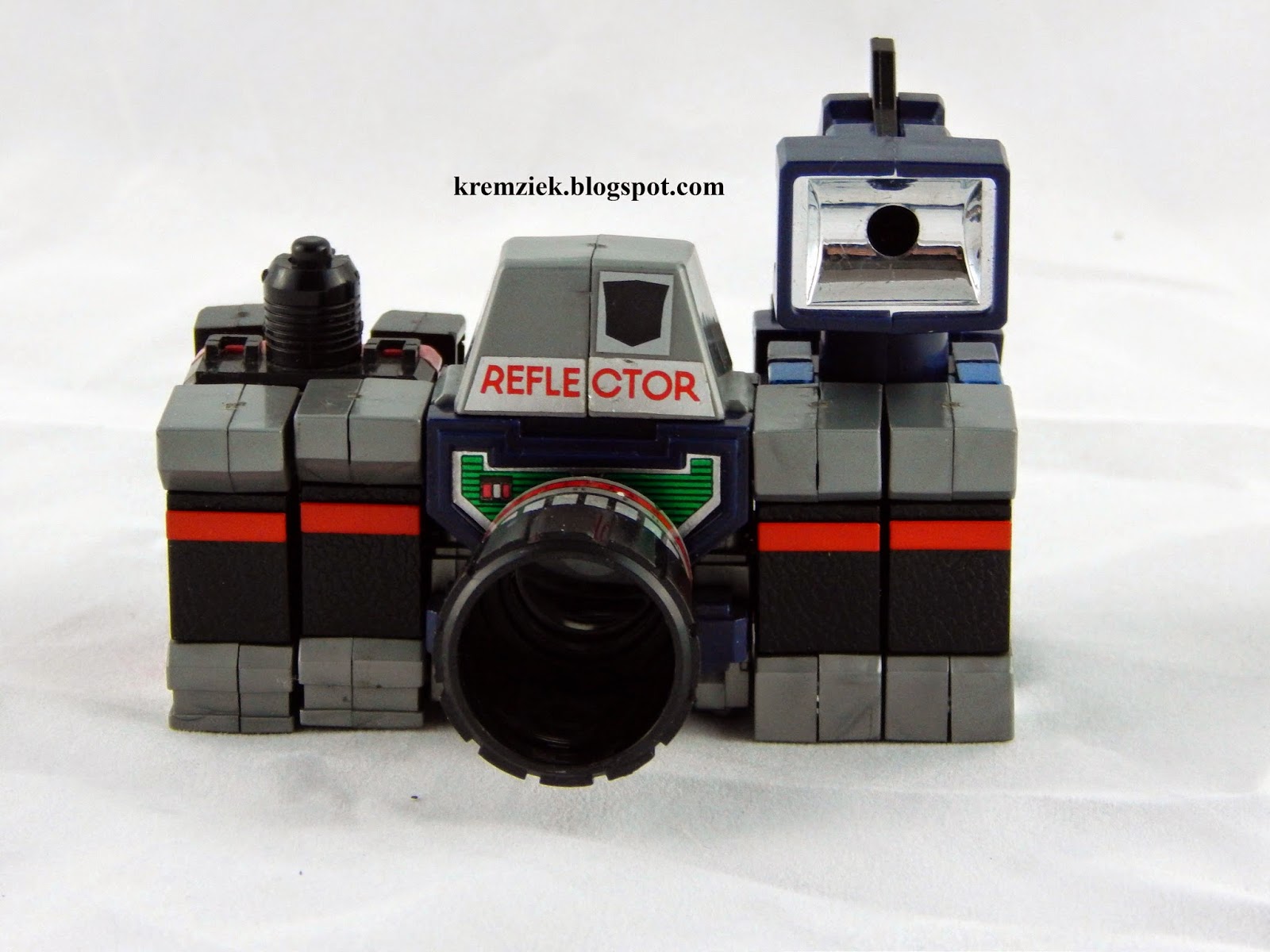 Well, that's it for 2014.  What does 2015 hold?  I know that the immediate future holds more Masterpiece and some select Generations figures, but I'm really excited to see what else is coming down to pipeline.  Hope to see you all there!
Posted by Optimal Omega at 12:00 AM 2 comments: