This is an expensive year, and it's just started. Just from Encores, Masterpieces, and the SG VSE set, I've already committed almost $1200. That's half my yearly budget for figures this year. I'd like to spend more, but wife, kids, mortgage, yada yada. First world problems.

Speaking of Masterpiece, I'm amazed that in the first 8 years, there were 10 releases and only 6 molds. Between 2012 and the end of this year, there will be 8 releases and essentially 7 molds. That's crazy. I almost kind of wish that Tomy would slow down, then I think about the 8 years before this Golden Age.  I'm all for more releases, especially if this means that Tomy are finally listening to people and go head to head with the 3rd party stuff, which is great.  Could my dream of a Masterpiece Combiner finally happen?  A Masterpiece Headmaster, Targetmaster, or dare I say, Pretender?  The mind boggles.

Thanks to the amazing new releases this year, my ability to continue growing my G1 collection has slowed. I so need to get back to that. I've been cruising eBay and other places looking for my next purchase, but I just need to make up my mind.

I've never been happy with this blog. The layout has been bland, and my photography has not been that great. I think I've taken steps to make the layout more appealing and I've made great strides with my photography. The only thing I'm really not pleased with would be the posts themselves. They seem rushed to me, because they are. To rectify that, I'm taking more time on my posts. Easy fix. The posts will be more in depth, which will take more time to compose. My next post will be up this weekend and be about MP-13, Soundwave. I'll receive Soundwave this Tuesday, but creating the perfect post, with pictures, will take about three days, due to things like work, kids' homework and being a family man. Keep your eyes peeled for that post!

I never thought I'd say this, but I'm pretty disappointed so far in Regeneration One. The storyline has just meandered, it seems. There's a slow build towards...something, but I'm not sure what. Will Hot Rod become Rodimus Prime? Why was Repugnus on Earth, and left there? Thunderwing, again, really? These are things that've popped into my head as I've read this series. Then again, I was rather unimpressed with Robots In Disguise until the last three issues and that's now one of my favorite comic series. Furman has a lot of goodwill with me thanks to the Marvel Run and the -tion run at IDW that was kinda ruined for me by All Hail Megatron, so I'm willing to give him the benefit of the doubt.

The bright spot for me for Regeneration One has been Andrew Wildman. He is, to me, the greatest Transformers artist of all time. Sure Don Figueroa is great, as are E.J. Su, Nicke Roche, et al, but Wildman's art is just so damn expressive. His characters wear their emotions. They look fluid. I don't know if I'm describing what in thinking very well, but suffice it to say, Wildman's art evokes some strong feelings in me.

Okay, Random Thoughts III over.  Back to looking for more toys to buy.
Posted by Optimal Omega at 11:17 PM 4 comments: 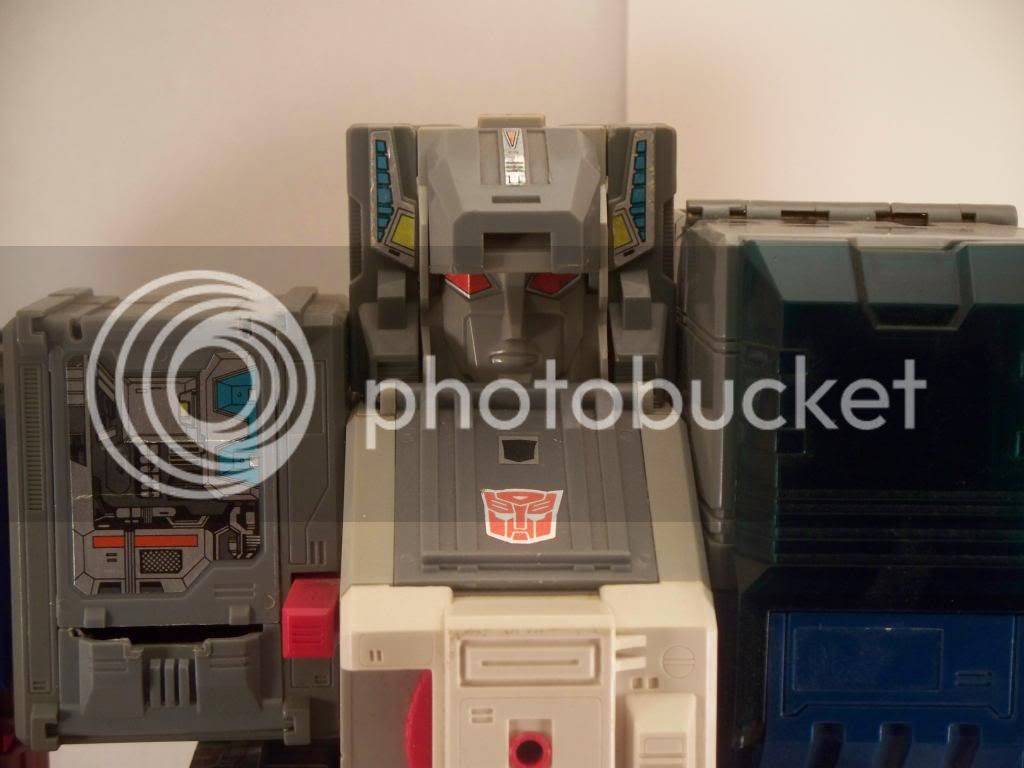 Time to rectify that.

I remember when I got my Fortress Maximus.  I was in the 6th grade and my parents gave me a choice: I could either get my first stereo with a turntable (God I'm old), or I could get, as they put it, that big Transformer.  I thought about it for a bit before I ultimately decided to get Fortress Maximus.  Stereos would be around forever, I reasoned, but Fortress Maximus would only be available for a short period of time. 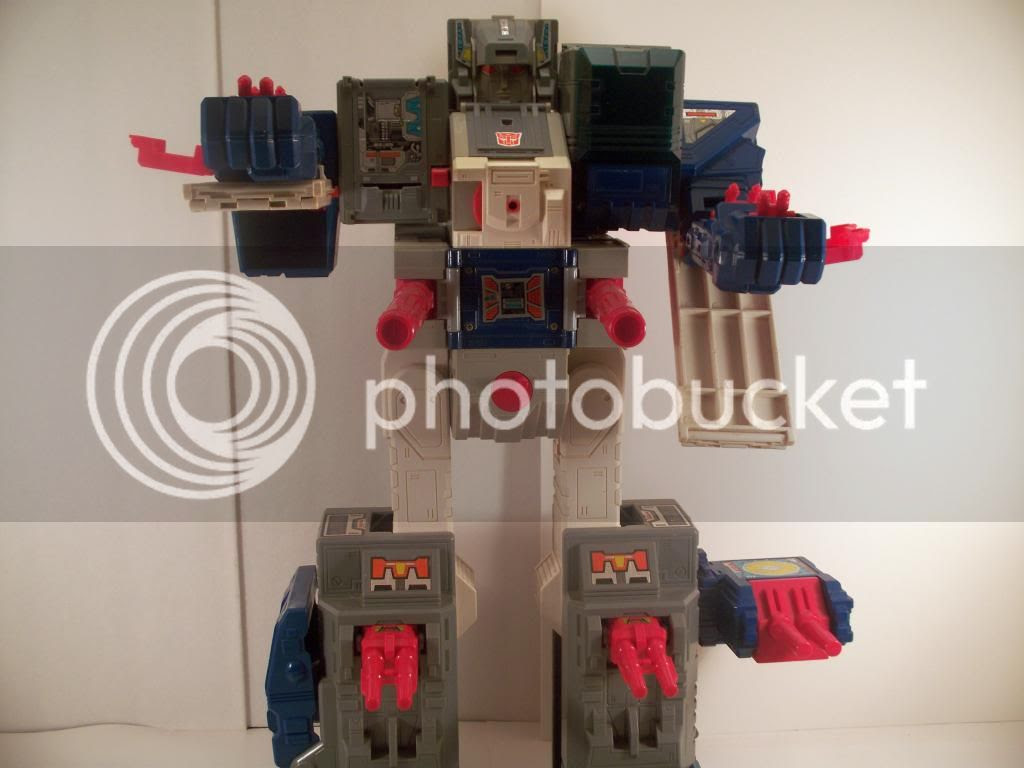 Looking at him, it's easy to tell that I've had him since 1987.  He's dirty, and his stickers are peeling.  Because he's so old, and expensive to replace, I'm hesitant to transform him, let alone add things like water to the mix.  For a figure that's so old, he has amazingly tight joints.  I thought that I was going to break one of the tabs on his leg cannons when I popped it out. 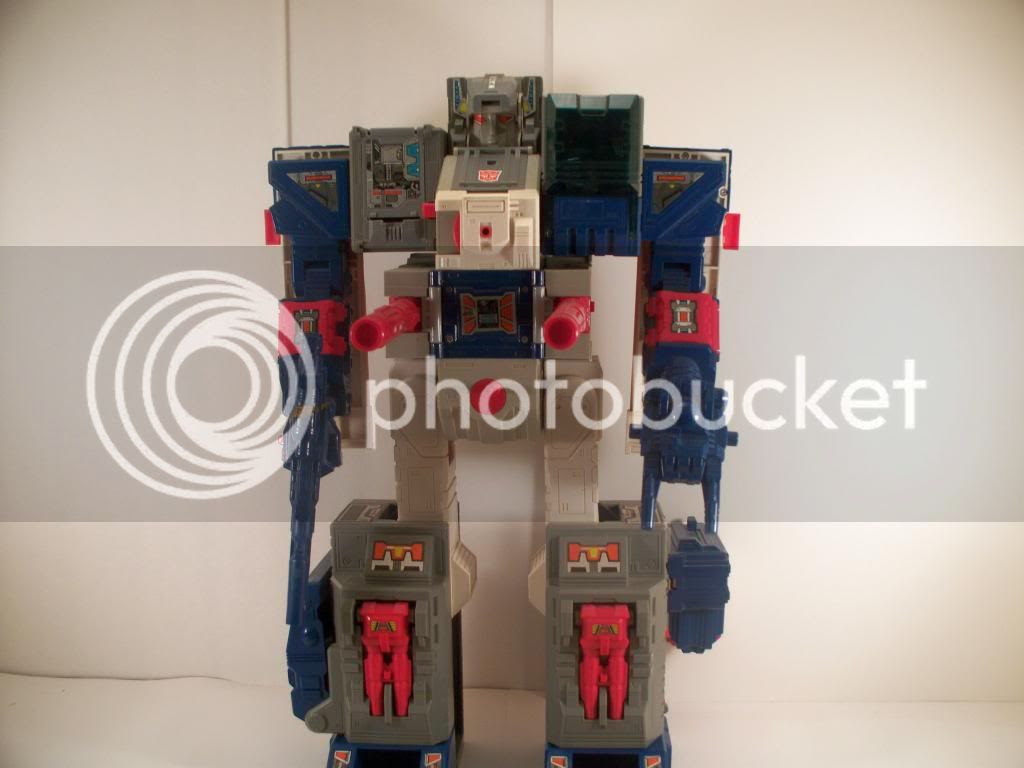 I knew when I got him that he'd be heavily armed, and I wasn't disappointed.  Aside from the two handheld guns, Fortress Maximus comes equipped with leg cannons, waist cannons, a cannon on his left leg that swings out, cannons on his forearms, and cannons in his freaking hands! 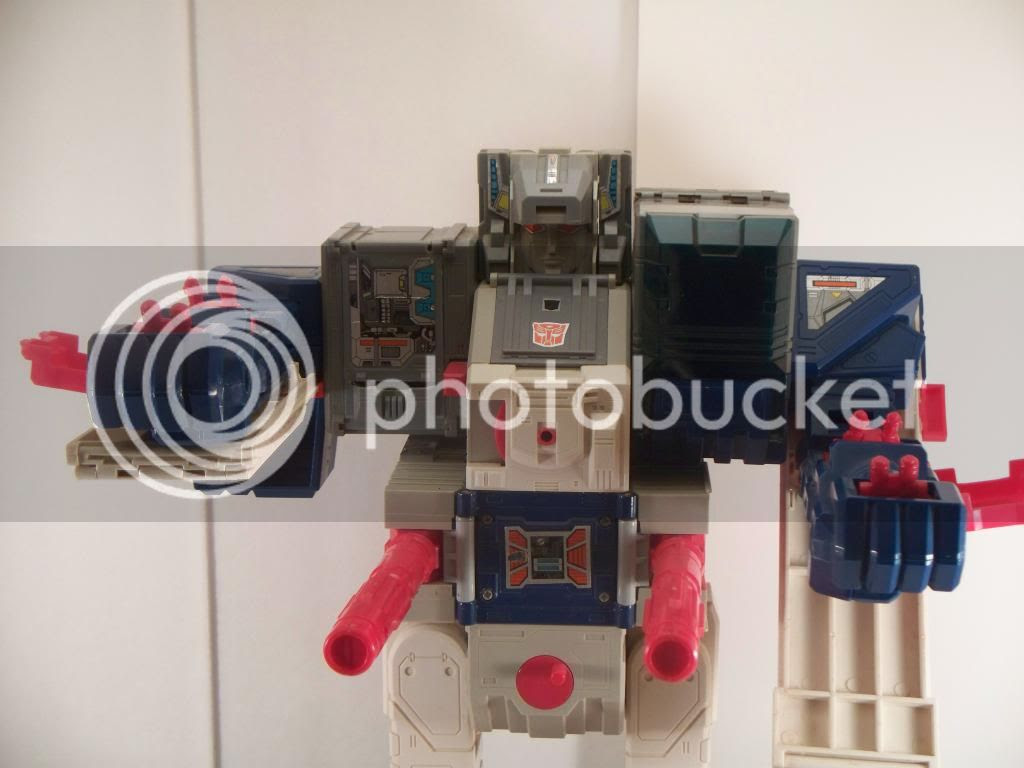 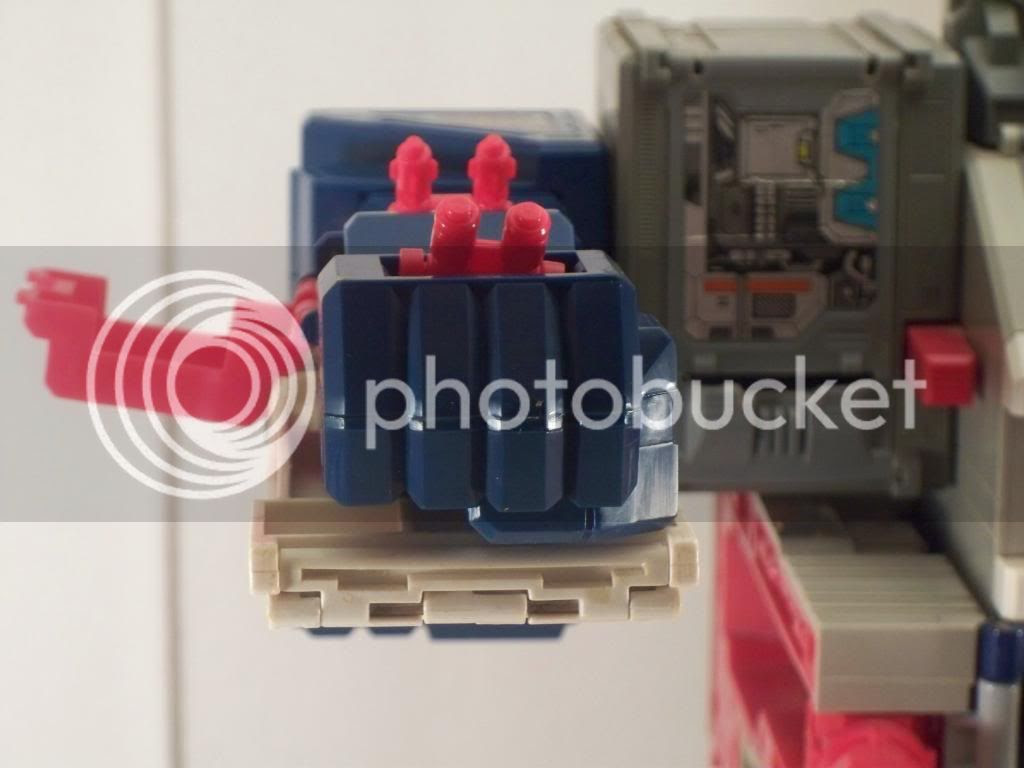 Fort Max, like every other base released after Omega Supreme, is a triple changer. He has a robot mode, city mode, and an attack vehicle mode.  Let's look at the city mode. 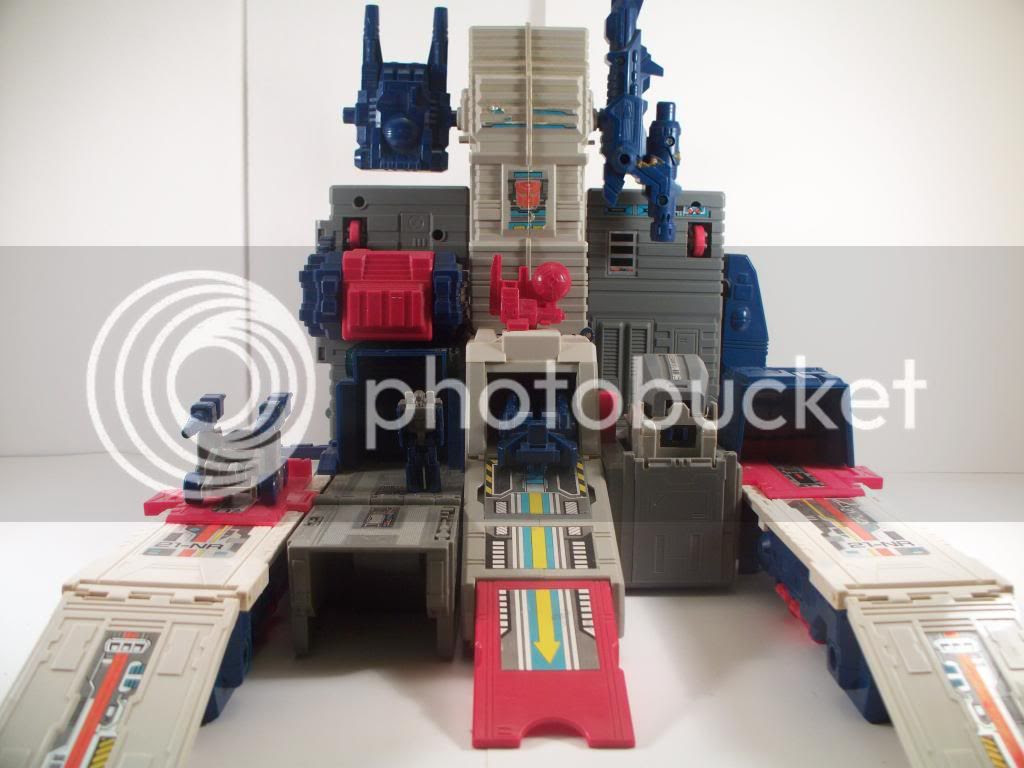 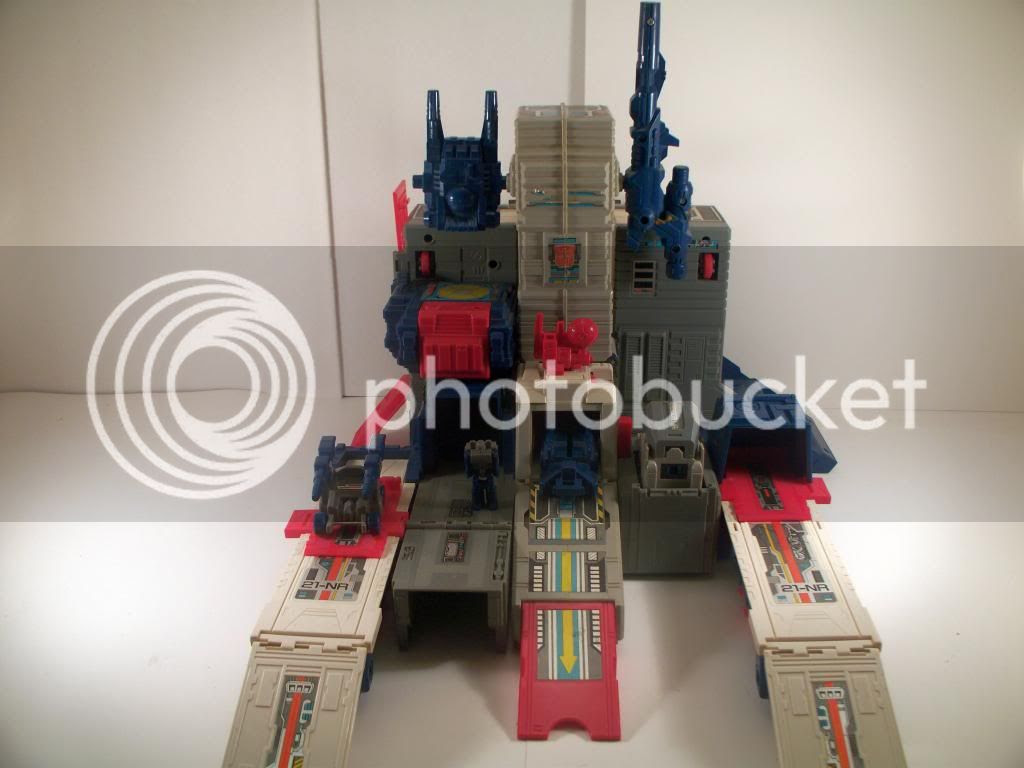 The city mode is massive, of course, but also beautiful.  It's large, compact, and full of features.  The two large ramps feature manual launchers so you can launch your vehicles.  The main ramp in the middle, the one with Grommet, features a push button launcher.  It's pretty neat.  There's also a spinning radar dish at the top, a helicopter landing pad, and a few other neat features.  The first we'll look at is the jail cell. 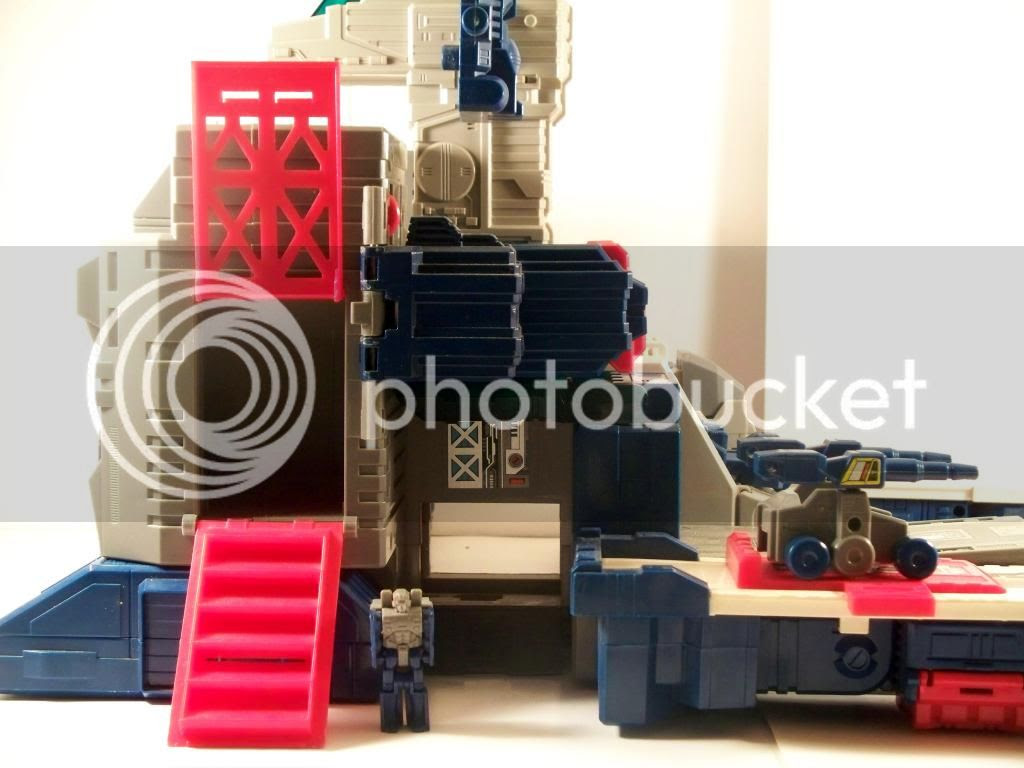 Should the Autobots manage to capture a small Decepticon or a Decepticon Nebulon, there's the perfect place to put him.  I really like it. 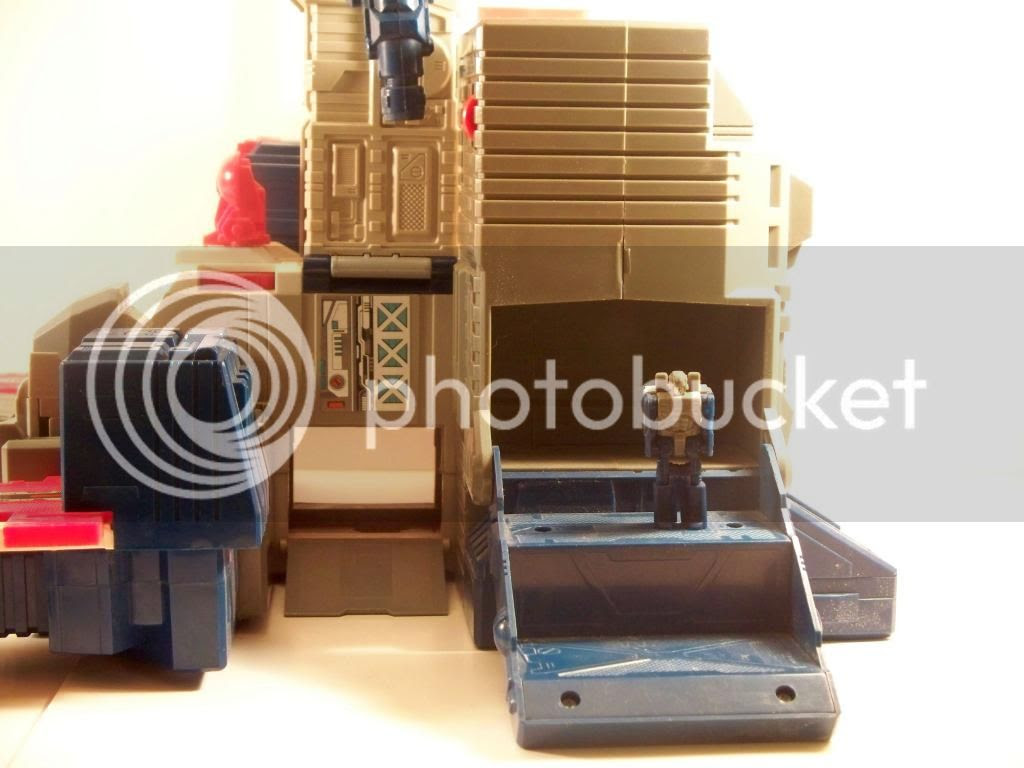 This is what I've always just thought of as another entrance into Fort Max.  To the left of the stairs, we see the elevator which leads to the ramp. 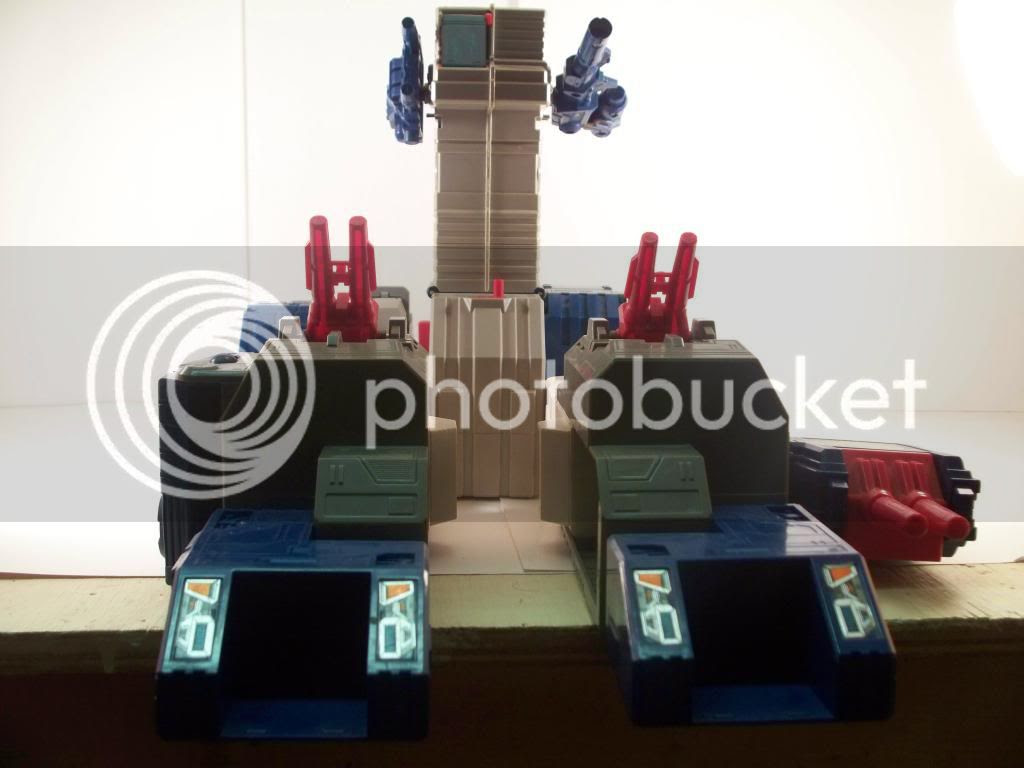 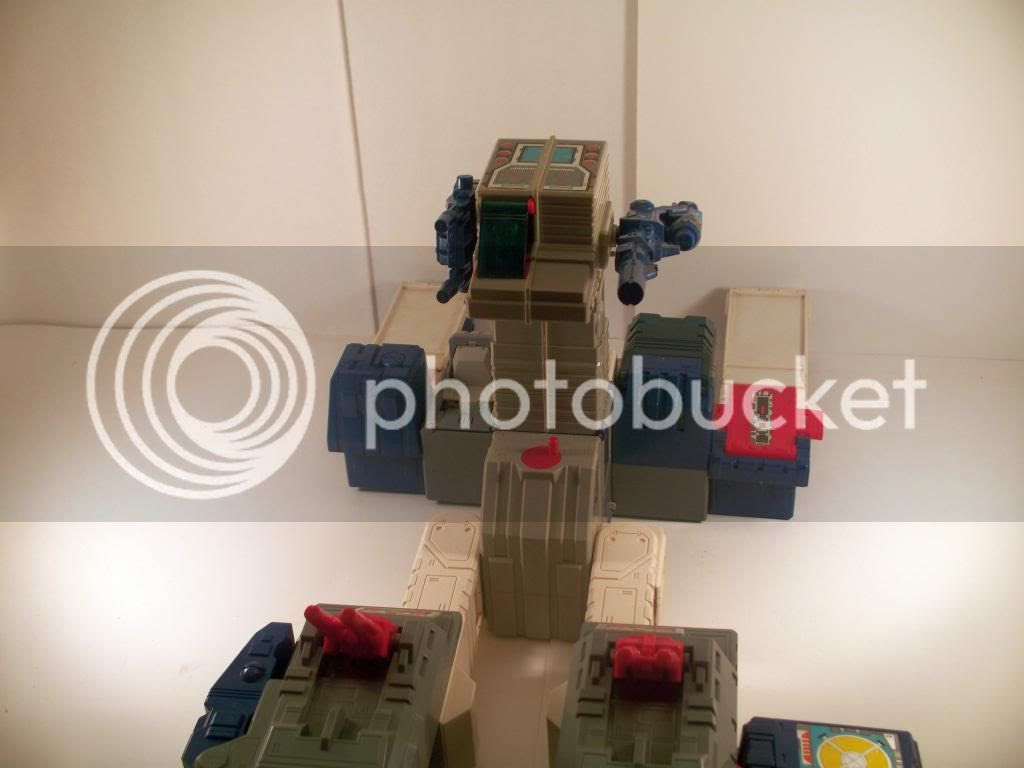 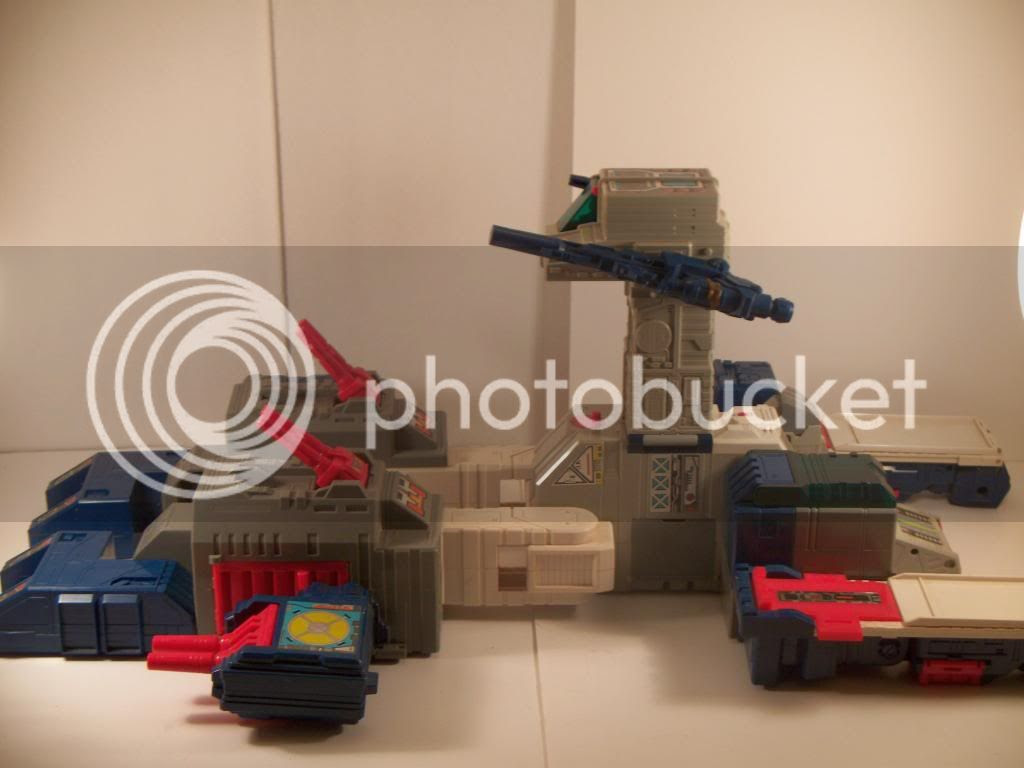 I'll be honest, I don't like this mode.  It's too big and it just looks like Fort Max decided to lay down.  The less said the better.  Anyway, Fort Max is more than just a city.  He comes with friends!

First we have Cerebros. 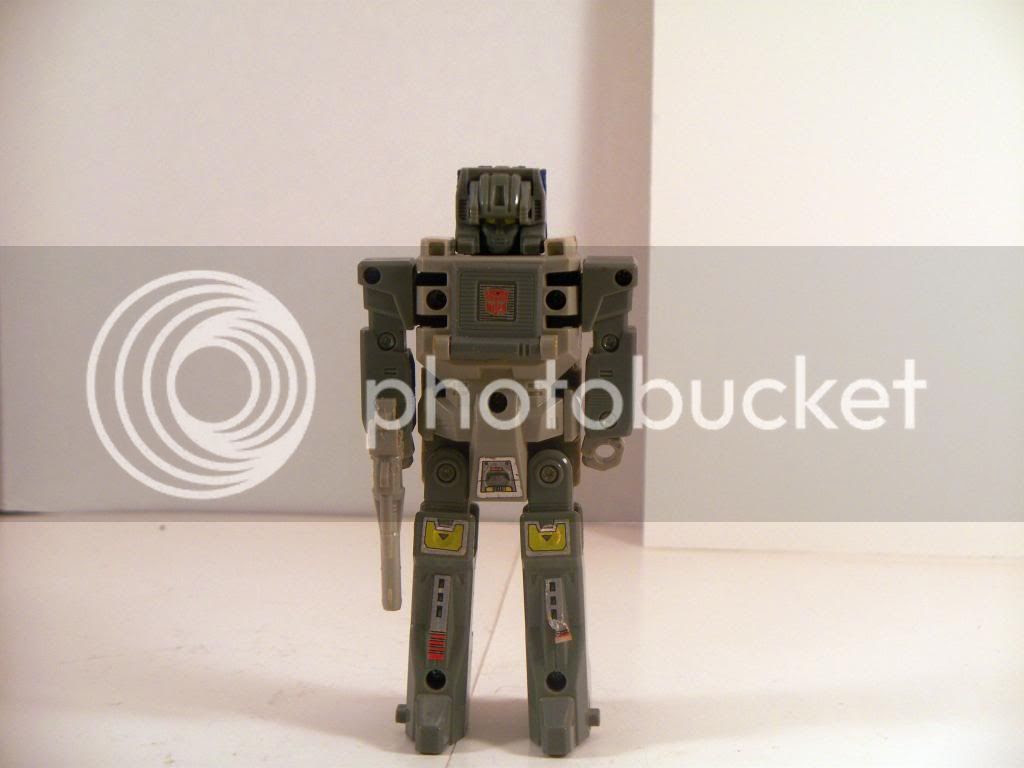 I really like Cerebros.  His head sculpt is nothing like the one from the cartoon, but that's fine.  It still looks pretty good. 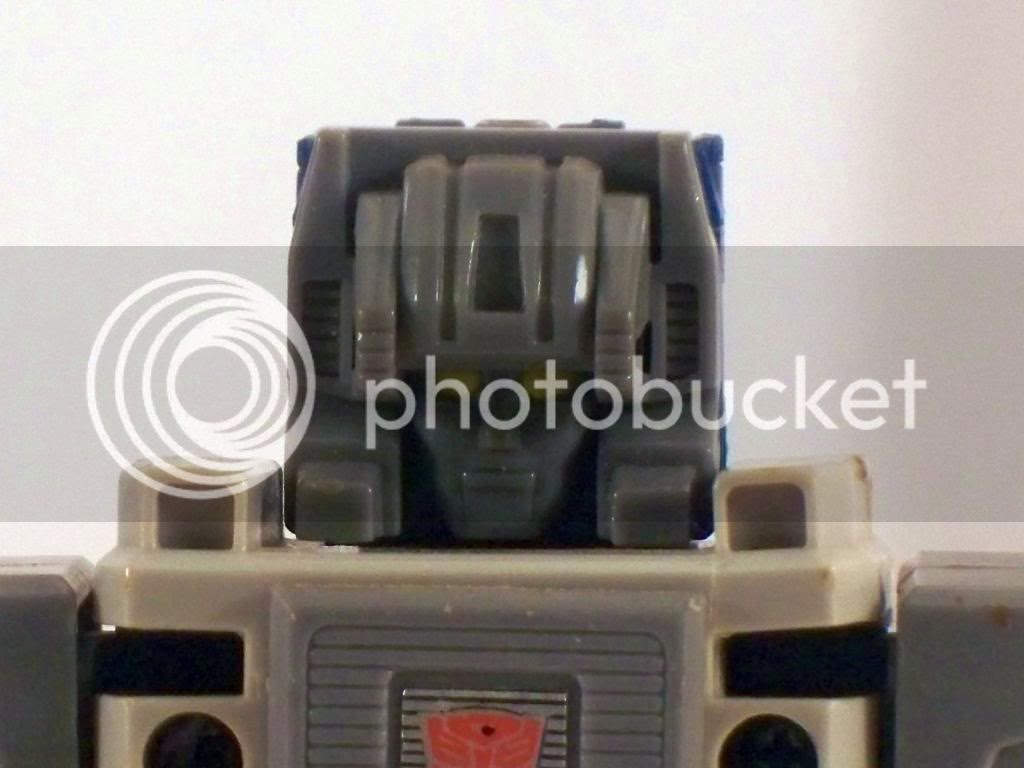 It's almost like a smaller version of Fort Max's head.  Cerebros is a triple changer as well.  There's his robot mode, Fort Max's head, and what I've been told is a computer for the city mode.  Really, it's just a bent over Cerebros. 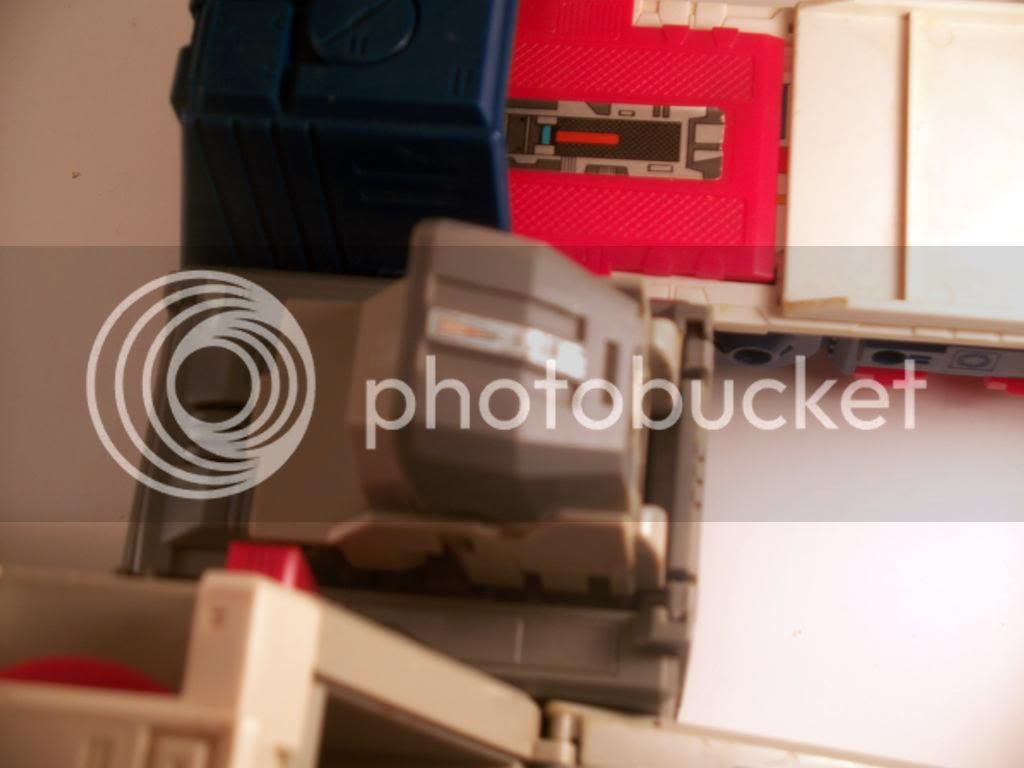 Cerebros himself is a Headmaster!  His partner is Spike, who, according to his Tech Spec, is from Nebulos now.  That confused me as a kid, but I don't really care about it now.

Along with Cerebros and Spike, Fort Max also came with two drones, Gasket and Grommet. 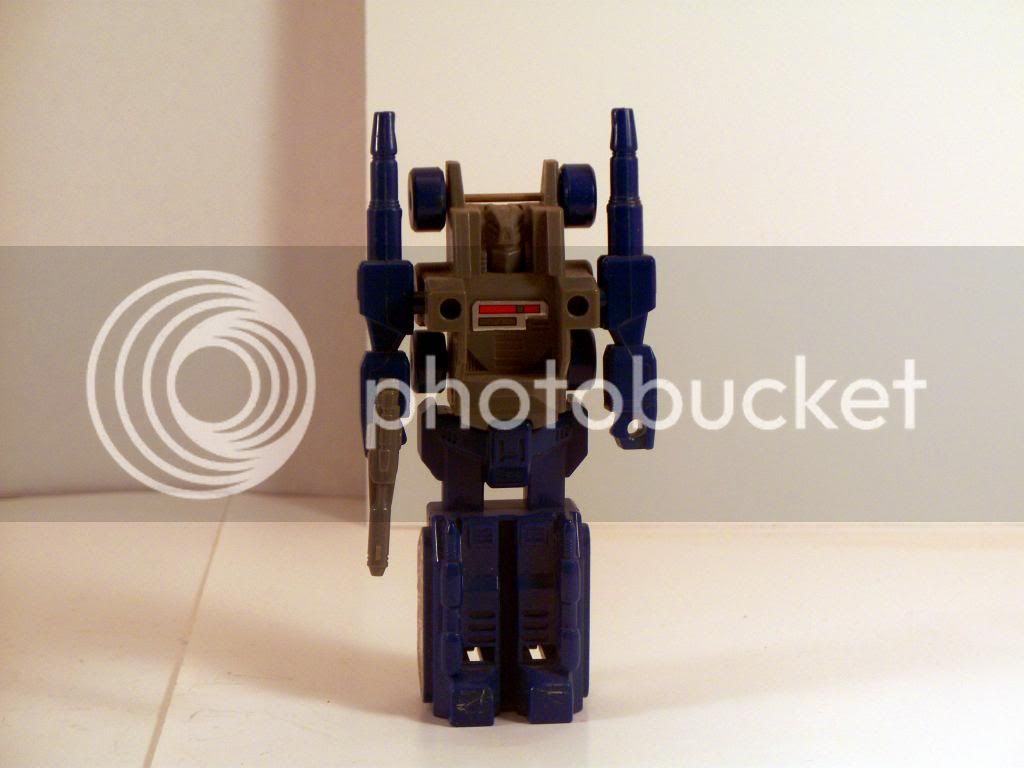 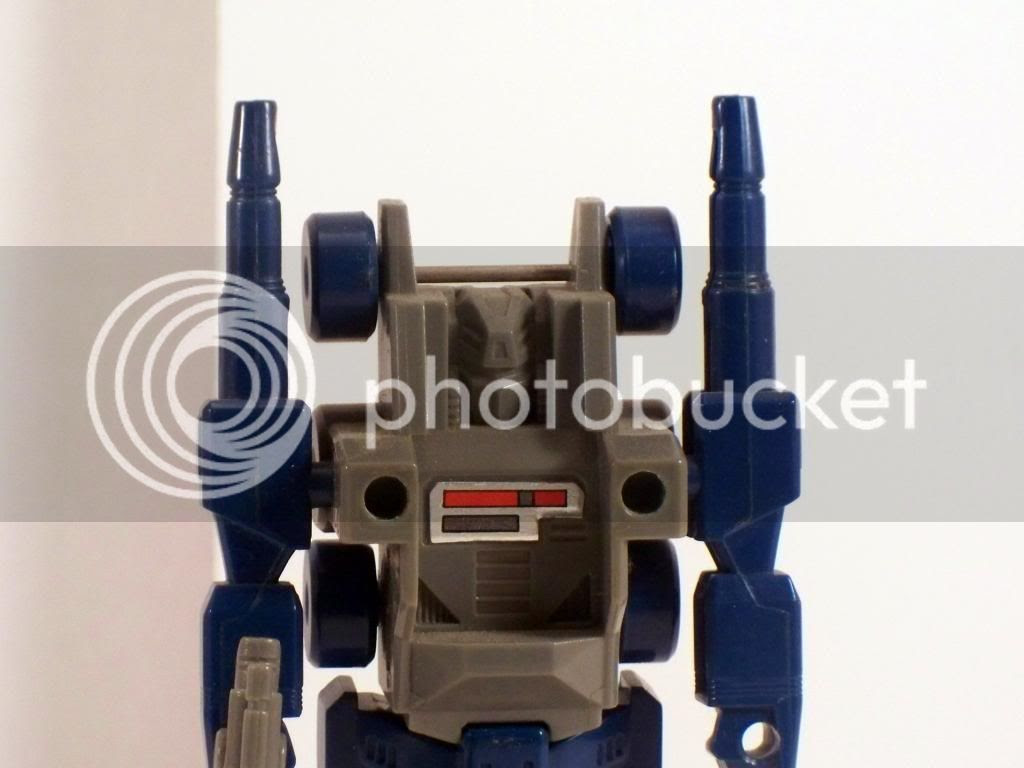 Overall, I love Fort Max.  He's tall, feature packed, and features decent articulation for a G1 figure.  I'm looking forward to the Encore release of this figure so I can see how it compares to the original.  Besides the sword. 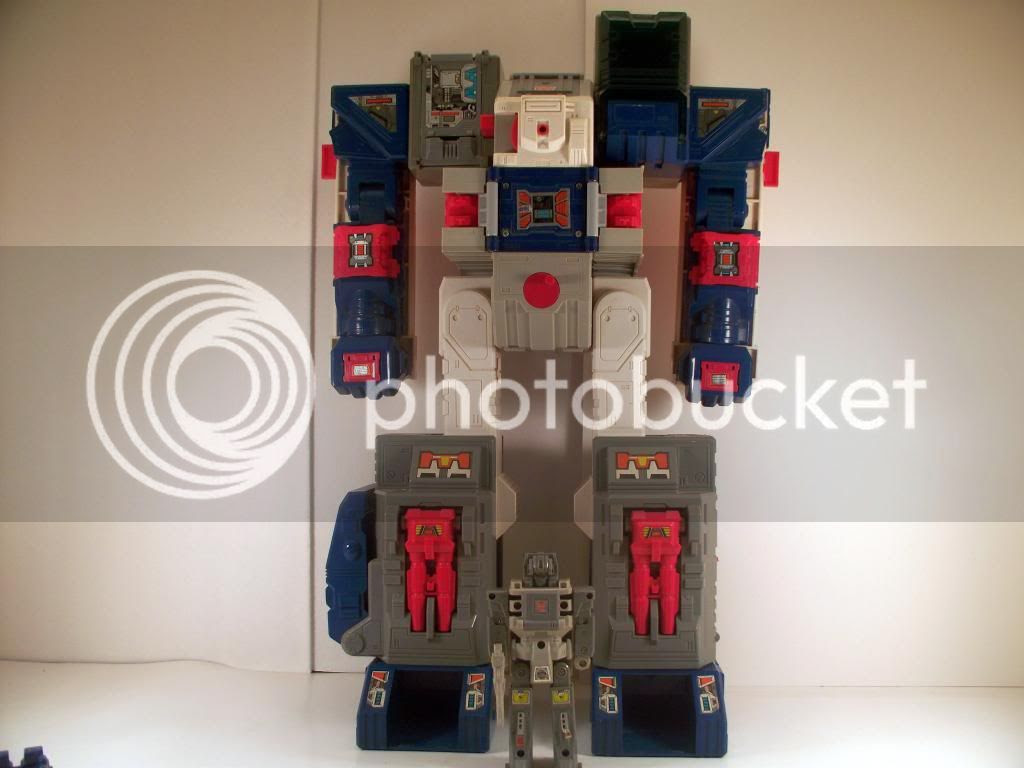 Also, be sure to check out the tabs on the bar up top as I plan on adding many new sections over the next few weeks.  I'm starting with the smaller parts of the collection and working my way up to the G1 figures.
Posted by Optimal Omega at 12:00 AM 4 comments:

I'm working on becoming a better photographer.  In addition to that, I've been practicing my figure posing.  To work on this, I'm taking pictures of my collection again.  There will be some group shots, individual shots, action poses, and some static ones.  Maybe I'll even throw in some alt-mode pictures.  Right now, I have my Masterpieces done in 'bot mode.  If you look at the top of the page, there should be a link titled "Masterpiece".  Click that, and enjoy.  Let me know what you think.
Posted by Optimal Omega at 11:46 PM No comments:

I got bored and decided to poorly recreate the Studio Ox version of the Scramble City Combiners in a what if scenario.  Essentially in this scenario, the combiners put aside their differences and then switch limbs.  And shake hands.  So, yeah.  Here's the original version first. 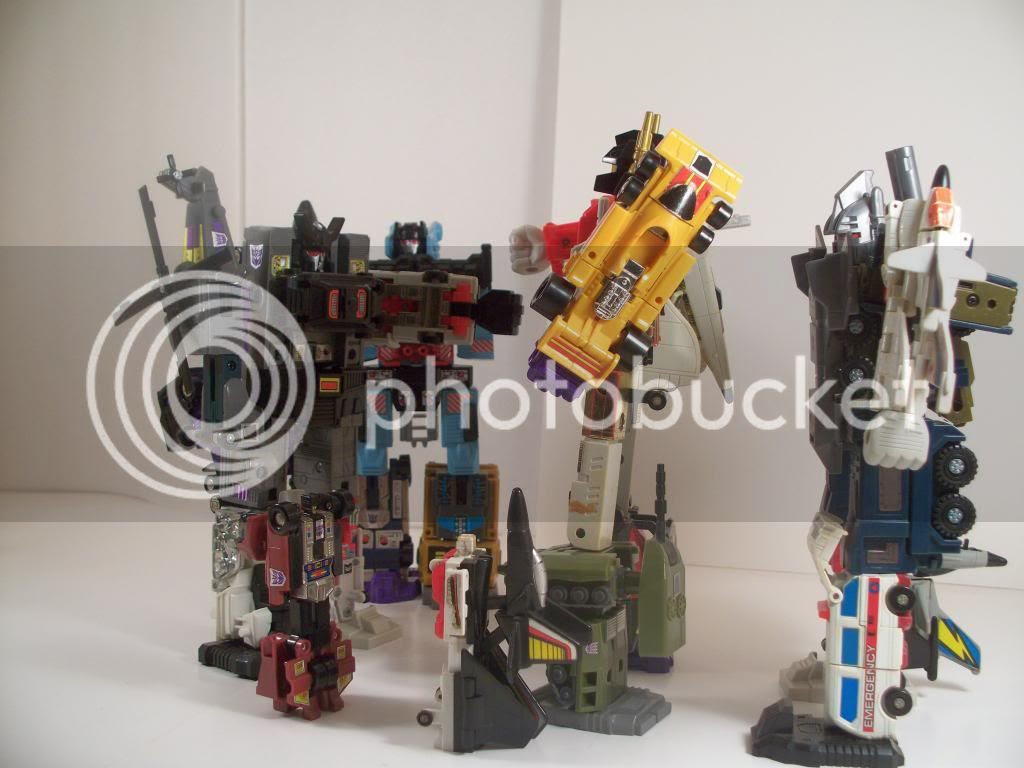 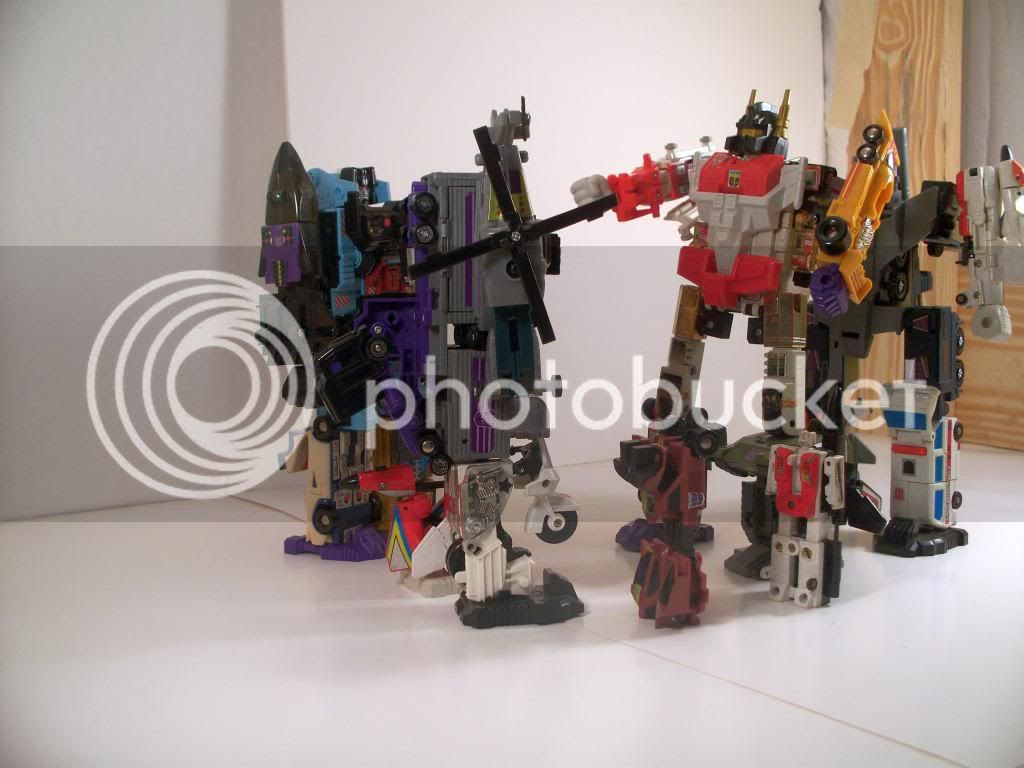 The Year in Review

My very first post on this blog was January 29, 2012. It's been nearly a year since I've started this journey and there doesn't seem to be an end in sight. That suits me just fine. Seeing as how 2012 is over, I thought I'd do a wrap up of the year.

This has been an amazing year, I won't lie. I've added to my collection substantially. I started the year with 351 Transformers and a goal of hitting 400 by the end of the year. I then scrapped that and just decided to get every G1 figure I could get my hands on. I hit some slow periods throughout the year, but I kept plugging away. I'm glad to say that I've hit both the 400 figure goal and still managed to snag figures that I hadn't planned on getting.

Starting this blog has been a great way to get myself back into the online fandom.  I've come across a great number of blogs out there that do nothing but inspire me to be the best collector I can.  I'm looking forward to 2013, my wallet isn't, but I sure am.  I'll close out this post with pictures of my hauls from the past year.