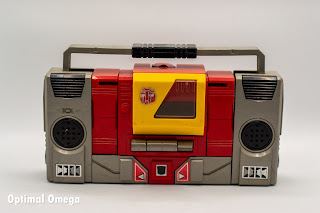 1985 was a weird year for me.  Yeah, I got to go to Hawaii, but I then had to leave the lovely environment that was San Francisco, with a beach a 5 minute walk from my apartment, for the city of Long Beach.  I only lived there for something like 8 months, but I did not really enjoy my time there.  One thing I did enjoy?  Getting Blaster! 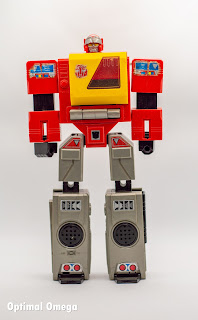 My parents had this fun tradition every year when they got their tax returns.  It involved dragging me and my brother to electronics stores while my dad looked at stereo equipment.  And we wouldn't just go to one store, we'd go to five or six.  My dad would look for amplifiers, equalizers, tuners, speakers, you name it.  About the only thing he never looked at was turntables, because he had some high end Technics turntable that he just adored.  He still has it.  After doing all of that, we'd hit music stores where he and my mom would then look for albums.  This would be the entire day. 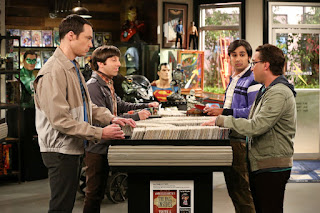 There are scenes in the show "The Big Bang Theory" where they're flipping through comics, and saying "Got it" with each issue as they pass it.  That's my parents at a record store.  Their vinyl collection was pretty massive back in the day.  My mom would pull up say Blue Oyster Cult's "Agents of Fortune", and my dad would look over his glasses and say "I have that one already."  As a kid, man, there was nothing more boring than that.  As an adult?  I'd kill to do that these days.

Before being dragged off to shop all day for "adult" things, my parents would placate me and my brother by taking us to Toys R Us and letting us pick out a toy to play with while we were tagging along.  On this particular trip I picked the greatest red, yellow, and gray Autobot of all time.

I had no clue about his past as a Micro Change past, so the opening compartment made me angry.  No cassettes?  Major gyp.  I didn't know that in about a year, we'd have four cassettes for Blaster to partner up with.  Another couple of years later, we'd get yet another two.  It's a far cry from what Soundwave got, but it was enough. 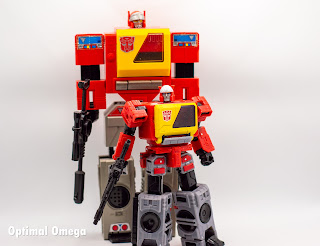 The best part about having Blaster was walking around with him on my shoulder pretending that some raging tunes were blaring out of him.  Usually Boston or Pink Floyd.  I took him everywhere.  One week, while attending Hart Elementary School in Long Beach, California, I was the student of the week for my 3rd grade class.  There was a form that I had to fill out so the other kids could get to know me better (Favorite food?  Lasagna.  Favorite color?  Blue).  I also got to bring in something that represented me.  Guess who I brought?

Thanks to a few past incidents and my parents' paranoia, I wasn't really allowed to take my toys out of the house unless my parents were with me.  This didn't really stop me from sneaking toys out of the house and to school.  If I really wanted the kids at this new school to know me better, I had to have Blaster there. I found out once I brought him to school that Blaster had to stay there the entire freaking week.  That was going to be hard to cover up.  Once my mom found out, I was grounded for a week.  Let that be a lesson to everyone.