I'm on the march to the end of the US G1 line, and it's been a slow, cumbersome process to get there.
Currently, I'm at a point where getting good specimens are going to be expensive, or there are characters that I couldn't really care about.  Seriously, getting excited about Micromasters is just hard.  The exciting thing is that I'm finishing a ton of subgroups along the way.  Recently, I completed the Decepticon small Headmasters when I got Squeezeplay and Fangry. 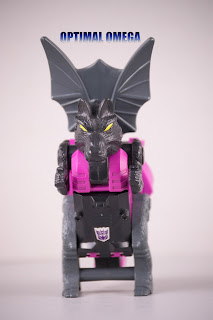 We'll start with Fangry since I purchased him first.  The interesting thing about the small Decepticon Headmasters is that the beast modes are comprised of two different animals.  For Fangry those animals are a wolf and a bat.  I think, I'm not entirely sure.  Based on some good old fashioned Andrew Wildman art, the wolf part is definitely right.
Man, could Wildman draw.  Love that guy.  Anyway, Fangry in real life does not look like that. 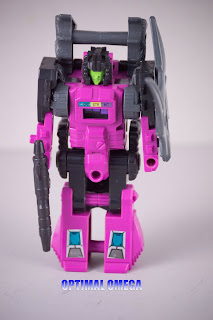 Fangry has a transformation scheme that I wasn't expecting.  His head goes where is, um, butt is and his tail splits into arms.  As far as robot modes go, it isn't horrible, but it isn't spectacular.  The purple just reminds me of late 80's Decepticons for some reason.  I keep wanting to say that Fangry is Roadgrabber for some reason, and I think it's because they use the same shade of purple. 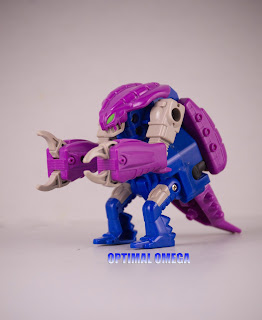 Squeezeplay wound up being my favorite of all of the small Headmasters, Autobot and Decepticon.  He's supposed to be a crab monster thing.  I guess the claws are crab-like, but I'm also seeing some sort of snake.  Or I'm just wrong.  Either way, it still looks better than Fangry and Horri-Bull, even with the teeny, tiny legs. 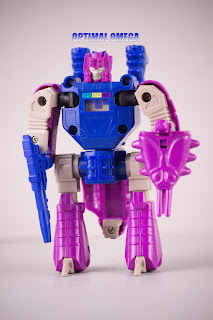 The only downside to Squeezeplay is the monster head drooping down on his backside, there.  For the record, I wound up buying an unused Squeezeplay that was barely attached to the bubble, but Lokos was still sealed.  As you can see, he isn't unused anymore, but I still haven't busted open the packet containing the paperwork. 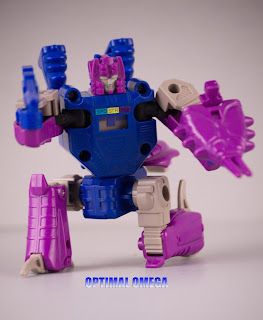 I think that Squeezeplay may be the most articulated G1 figure ever.  Dude can just straight pose.  Waist articulation and bending knees?  Hell yes.  Almost Masterpiece level, right there.  This is how I have him in my display case.  Just simply stunning. 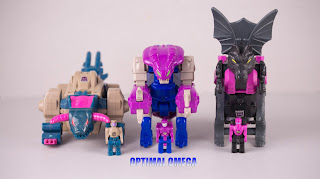 Final shot: all three small Headmasters together.  Such a nice, nice grouping.
Posted by Optimal Omega at 3:15 PM