For some reason people don't respect Pretenders.  I posted a pic of my latest purchase, Classic Pretender Starscream on a couple of Transformer Facebook groups and there were those who asked "Why?" or "I hate Pretenders!"  Really?  Apparently I was the only 11 year old that head the phrase "Pretenders hide the Transformer inside" and thought it was cool.  Whatever.

To coincide with the 50th issue of the Marvel Transformers comic, Starscream became an all-powerful megalomaniac who gained his powers from the Underbase.  It made him extremely large.  The two beings in the bottom of the picture?  Scorponok and Optimus Prime in his Powermaster form.  So, yeah, huge.  As a result of absorbing the vast knowledge contained within the Underbase, Starscream exploded and died.  His remains were collected and somehow wound up back on Cybertron with Megatron.  After a kidnapped Ratchet was coerced into repairing Starscream, we were given this:

Pretender Starscream!  Once his repairs were completed, he went to Earth and wreaked a bit of havok.

And then the shell was never seen again.  It's purpose had been served, however.  I wanted this guy.  After some cajoling with my parents, I was finally granted an opportunity to get him, and I was pleased as punch when I did get him.  This was my first ever Starscream.  I was denied the original version when I was younger due to my parents constantly getting me Autobots.  Finally, I had a Starscream.  Then after a bunch of moves, I lost most of him.  Here is all that remains of my Classic Pretender Starscream: 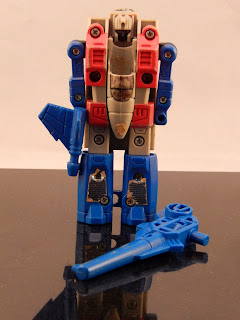 There are a few things I never really liked about this version of Screamer.  The first being the grey head.  I'm just not fond of it.  Second, there's the blacks on the figure.  I have no idea what kind of paint they used, but it scratches off very easily.  The same thing happened to my Classic Pretender Jazz.  As you can see. I attempted to use a Sharpie to color in the canopy once the original paint came off.

I've been actively looking for a complete Pretender Starscream for quite some time, but that's a tall order.  It's very difficult to locate a good condition figure.  There's the aforementioned paint issues with the blacks an then there are issues with the shell.  Thanks to the helmets, most humanoid pretender shells have a lot of paint wear on their heads.  Quite fortuitously, I stumbled into a great deal on eBay.

Starscream's shell is very spiky.  Spikes equate to evilness, I guess?  I also imagine him as the mascot for a cheesy '80's metal band. 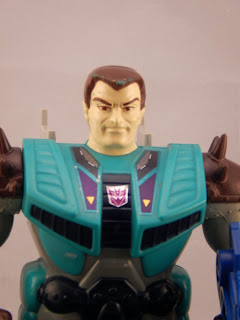 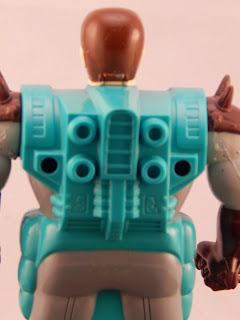 As you can see, there is very minimal paint wear to his head, which makes me very happy.  One note about that face - even as a kid, I thought the face was very funny looking.  I nicknamed the shell Bubba because he just reminded me of a redneck.  What's the condition of the inner robot, you ask? 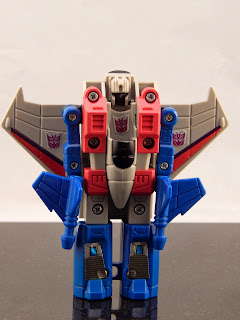 Other than the jacked up leg stickers, this is a perfect condition figure, in my opinion.  I'm amazed that I got one with the paint still on the canopy.  Especially considering the price I paid.  I really to wish that this version of Starscream had arm mounted Null Rays, however. 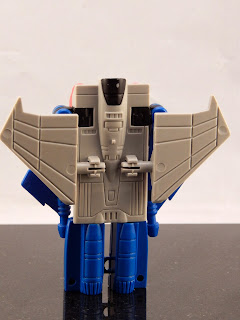 Here is a back view.  There is one tiny nick on the canopy, but I can live with that. 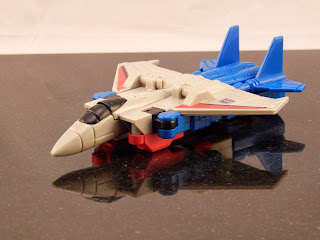 Jet mode.  As you can tell, the guns become tail fins.  Starscream's transformation is extremely simplified.  Just flip up the nosecone, flip the wings around and place the guns in  place.  Voila!  Instant jet. 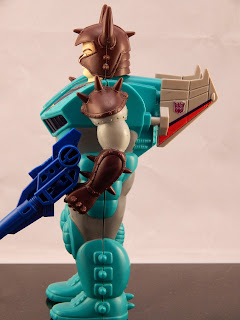 When Starscream goes into his shell, the wings tab into the back.  This will be the only time that the wings are in there because I know from experience that the posts will break from doing this too much.  Unfortunately, the small weapons have nowhere to go.  Guess they'll stay in a tackle box until needed.

I am so excited to have this figure again, you just don't know.  In my head, I keep hearing the familiar refrain "No, not Starscream!"  Now, I only need to finish my Pretender Jazz, and I'll have all of the Classic Pretenders again.  Hope everyone had a wonderful Christmas, and I'll see you in the New Year!
Posted by Optimal Omega at 12:00 AM